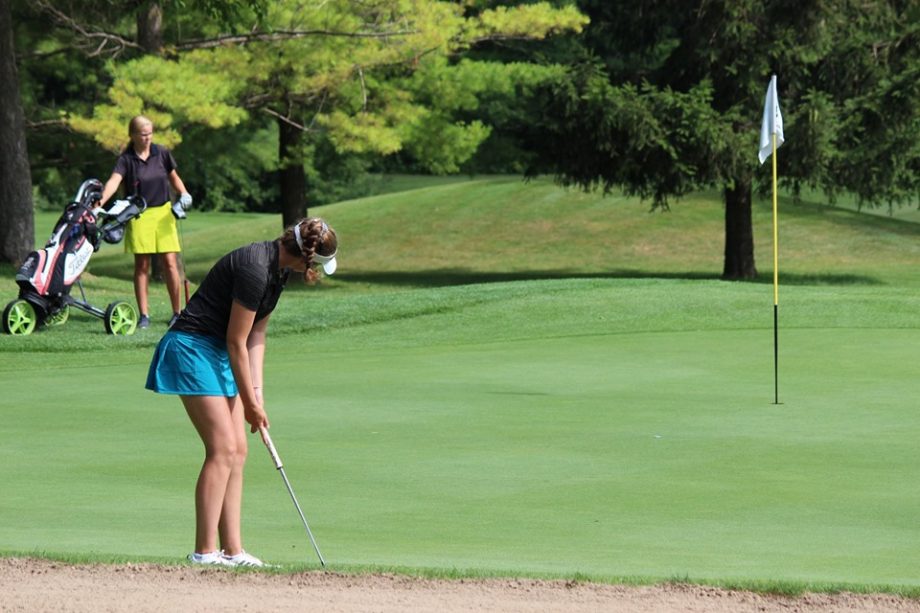 Listowel, ON — Foggy and cool skies welcomed the junior boys and girls as they set off to get their rounds of 16 underway at Listowel GC. As the day began to heat up, so did the play as both the boys and girls’ fields had competitive matches all around to see who would make it out of today’s two rounds.

Day Two started with 16 remaining players as they took to Listowel GC to try and make it to the round of 4 in the tournament. After two impressive rounds yesterday, Cody Clark (Oliver’s Nest GC) was yet again the center of attention, as he embarked on his attemp to win his second championship in two years. But after today’s two rounds, it was Josh DiCarlo (Pointe West GC) who stole the show.

Going up against the reigning champ in the first round of the day, DiCarlo came out hot early and took the lead in the first few holes. With some steady play and a few fantastic putts down the stretch, DiCarlo was able to hold the lead and advanced to the quarter finals in the afternoon.

It was then a battle of the titans to move on to the semi finals, with DiCarlo being the most steady player throughout the tournament, and Luke DelGobbo (Lookout Point CC) being the heaviest hitter. DelGobbo had been bullying the competition throughout the previous rounds with scores of 9&8, and 7&5, and there was no way of saying which of the two would come up on top. But after 18 well fought holes, it was DiCarlo who was yet again victorious.

“It was tough out there,” said DiCarlo. “I knew I had to hit fairways and play consistent to stay alive today. There was some tough conditions with some wind and the fog in the morning, so I knew if I played steady I could wait out other players mistakes.” When asked about how he plans to continue his success, his answer was straight to the point.

“Do the same thing that I’ve been doing all week. Play consistent and make some shots.”

Thomas Latter (Credit Valley G&CC), Kavith Ranchagoda (Beacon Hill GC), and Carson Duffy (Bigwin island GC) will all also be moving on tomorrow. The three have shown tremendous skill and patience over the course of the past four rounds, pushing through adversity and coming out ahead every time a challenge faced them. The four players will all take to the course tomorrow, battling for the final two spots in the last round of the tournament in the morning.

The third and final day will commence tomorrow at 7:30am, where after two more rounds, one will be crowned champion.

The Ontario Junior (U19) Girls Match Play Championship kicked off today with it’s first round of the day. The best junior golfers in the province took to Listowel GC to decide who would stay afloat for the semi-finals tomorrow after today’s two competitive rounds.

After two well fought rounds today it was Ella Weber (Rattlesnake Point GC), Sarah Gallagher (Blue Springs GC), 2017 champion Vanessa Chychrun (Beacon Hall GC), and Megan Miron (Hamilton G&CC) who made it to the semi finals tomorrow. With three playoffs in just the first round alone, the two rounds today were highly competitive and the entire field showed out, impressing everyone watching.

However, it was Weber who stood out among the rest. With two dominant performances in today’s rounds, she is the early favourite heading into tomorrow.

“I just came in focusing on playing my own game, and to only worry about what I can control,” said Weber. “I didn’t let other players plays get to me when they were catching up, I just kept my composure throughout.

Play will continue at 7:30am tomorrow, where the remaining four players will battle for the title.