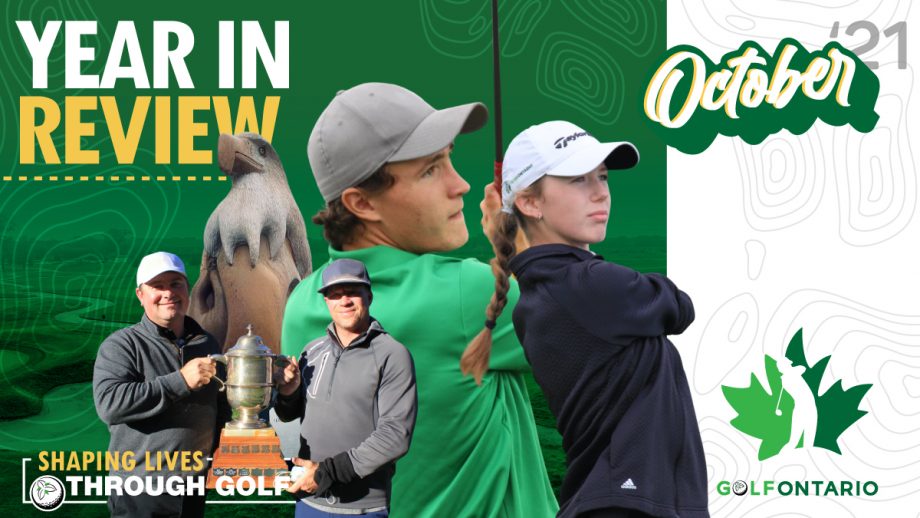 The final installment of our Season in Review series concludes with October and our last two competitions, which included a very special week at our Super Camp and Tour Championship.

An incredible week from Ambassador Golf Club for the 2nd annual Ontario Provincial Super Camp, concluded with the crowning of champions and an emotional presentation of our newest trophy. The second annual Tour Championship featured the top 64 junior boys and girls in Ontario, as they fought three days of tough competitors and varying weather conditions in their quest to come out on top. Team Ontario members on both sides filled up the vast majority of top spots in both the girls and boys divisions.

36-hole leader Ella Weber (Rattlesnake Point GC), a Team Ontario member, once again led the entire final day to claim the girl’s division. She came out victorious after a two-over (73) to finish one-under overall on the championship.  Capturing silver was Carlee Meilleur (Loyalist G&CC), the leader after day one, with a strong even-par final round (71). Finishing third at two-over overall was Ashley Lafontaine (Royal Ottawa GC) with a strong two-under (69), the only under-par score of the day for the girls.

On the boys’ side, Team Ontario players picked up where they left off after round two and attacked the course putting up low numbers once again. Second-round leader, Team Ontario member Ben MacLean (Cherry Hill Club), followed up his strong seven-under (64) yesterday with a terrific six-under (65), to be crowned the boys champion at thirteen-under on the championship. On his heels all day with a strong front nine was fellow Team Ontario member Owen Kim (Blue Springs GC), recording a brilliant six-under (65) as well and finishing three strokes back at nine-under. While Kim claimed the silver medal, bronze was tied between two more Team Ontario members, Andreas Diogenous (Whistle Bear GC) and Thomas Latter (Credit Valley G&CC), both shooting a two-under (69) and recording a six-under overall.

An emotional ceremony followed afterwards in the presentation for the newly created Dave Mills trophy. The trophy has been named in honour of Mills, a past Golf Ontario Executive Director and huge supporter and advocate for junior golf, who presented the first-ever Super Camp trophy in 2020. Members of Dave Mills family were on hand to present the trophy. His son John Mills spoke after while fighting some tears about the trophy and his father. “This event was very special to him; his life was his family but it was also golf and all of you. It was his passion.” He added his dad “was looking down and smiling”.

The Ontario Men’s Better-Ball Championship returned to Oakdale Golf and Country Club to conclude Golf Ontario’s 2021 season in fine fashion. The 62nd running of the event was composed of 58 teams looking to emerge victoriously.

At the end of a frigid but beautiful 18 holes, it was Jonn Drewery (Westmount G&CC) and Derek McGrath (Galt CC) carding an amazing nine-under (63) on the strength of 9 birdies and 1 eagle to lead the pace and secure the championship. The tournament proved to be competitive, with only a four-shot difference separating the first-place duo, and a three-way tie for third.

This concludes our Season in Review, as we looked back at a challenging yet amazing 2021 competitive provincial season. Golf Ontario would like to take this time to thank all of our sponsors and partners who helped make this possible; Adidas, Golf Talk Canada, Play Golf Myrtle Beach, Humber College, HUB International, BioSteel, Golf Genius, Modern Golf, Dormie, Durham Artificial Grass, Foresight Sports Canada, Baka, Nikon, Solo Golf, and Sport Travel. We are grateful for your continued support. Also a special thank you to all our host clubs, volunteers, officials and to you the golfers; you helped make 2021 a huge success.

Golf Ontario is Ontario’s Provincial Sport Organization focused on enhancing participation, elevating performance and supporting the passion of golfers in Ontario. With over 100,000 individual members and over 500-member groups and facilities, Golf Ontario is one of the largest golf associations in the world. From rating courses and keeping the integral rules of the game intact to growing the game at the grassroots level and hosting the best amateur tournaments in Canada, Golf Ontario is a passionate group dedicated to shaping lives through Golf.