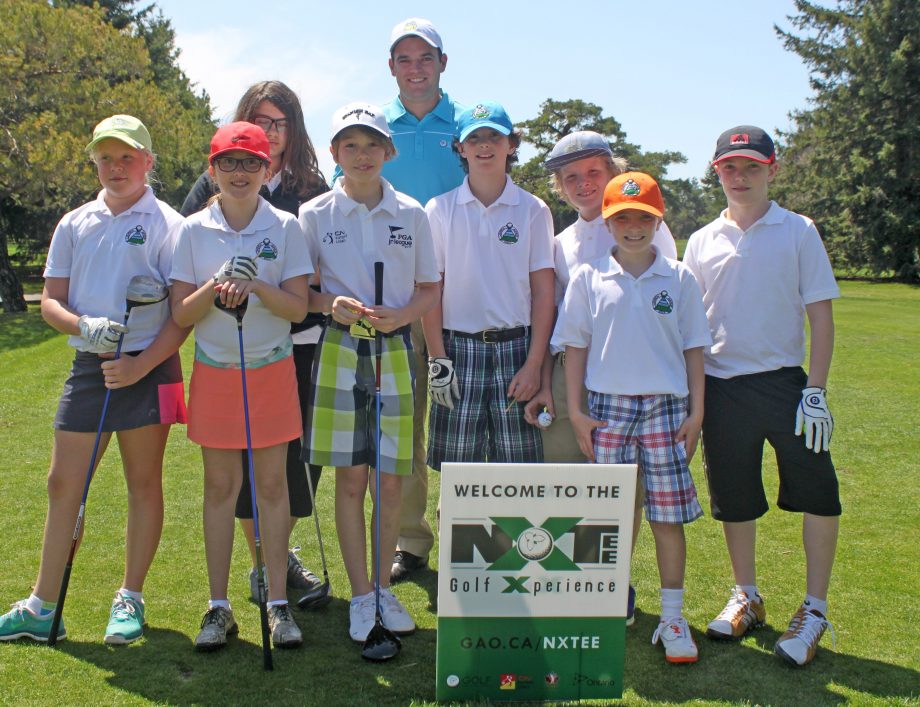 CAMBRIDGE — The Golf Association of Ontario (GAO) was pleased to present the inaugural NXTee Peewee Preview Tournament on May 2 at Puslinch Lake Golf Club, in Cambridge. The event was a wrap up to the NXTee Youth Golf Training pilot project, funded in part by the Ontario Ministry of Tourism, Culture and Sport, which offered off-season training to golfers 12-years-old and under. Participants from the program along with other young players teed it up in a scramble format that gave them a chance to see the course that will host the GAO’s Inaugural Peewee Championship Aug. 6-7.

“This event was a big success!” Said Mike Kelly, GAO Managing Director of Sport. “We had lots of parents, kids, coaches and teams take part and even Corey Conners starting the players off the first tee. It was a great opportunity for the GAO to get parents and kids on the course together and an excellent way to engage and keep them in golf.”

Conners was no doubt a big hit as the players were able to take pictures and ask the 2015 Masters participant questions on what it is like to be a professional player.

In total, 58 players took part in the event. The participation numbers were a welcome sight to NXTee Head Coach Doug Lawrie. “What I really like is that we had participation from as far as Lindsay and London. We had great support from golf development centres, which shows the recognition of the importance of the NXTee program. Seeing the kids participate, who were part of the pilot project this winter, really is a testament for how this program can help kids move forwards and figure out what is next for them in the sport.”

Lawrie also stressed the importance of grassroots youth programming at the provincial level to work with national programs like CN Future Links in relation to Golf Canada’s Long Term Development Plan. “What has been shown is that provincial golf associations can use programs like NXTee because it helps kids find their way in golf and map out a pathway recreationally or competitively. I think it is a great way to get them involved in the sport at an early age.”

The event also served as a building block towards the GAO Peewee Championship by allowing potential competitors to get an early look at the course that will be hosting the event. “Puslinch Lake has hosted our Ontario Bantam Championship in the past, so it is a logical move to hold our Ontario Peewee Championship here,” added Kelly. “It will be a fun and fair set up for everybody and will showcase the talents of these young kids. We owe a big thank you to the Ontario Ministry of Culture Tourism and Sport who helped get the NXTee program off the ground, which will lead into our Peewee Championship.”

While the event put the emphasis on fun and working as a team, and did not award winners, some of the teams finished with impressive scores including -5 and -3 on the boys’ side and -1 and even-par on the girls’ side.