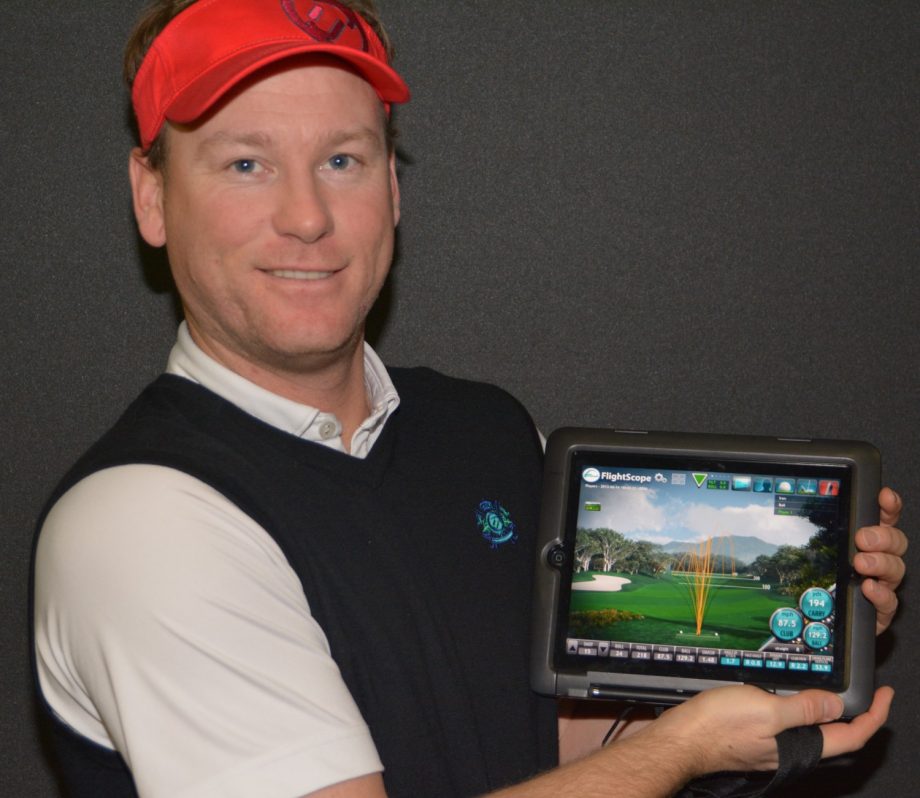 To say that the 2013 PGA of Ontario Teacher of the Year is a man in motion might be a bit of an understatement.  The past 12 months have been a whirlwind for Nick Starchuk who splits his teaching time between the Golf Lounge in Richmond Hill, The Golf Lab in Vaughan, The Oakville Indoor Golf Center and at Mississaugua G&CC from April 1 to October 1.

That’s quite the busy schedule – and when you add in his work on YouTube . . . www.youtube.com/smartergolflessons which is closing in  on 1,000,000 views, his 3,200 followers on Twitter @nickstarchuk, Facebook at /starchuk.nick, his personal business web site www.nrsgolf.com, it seems that Starchuk is just about everywhere.

It hasn’t always been that way for the 36-year-old Ottawa native who moved to Oakville to kick-start his professional golf teaching career back in 2005. He’d just spent two years playing mini-tours and didn’t seem to find the groove, so he joined the PGA of Canada and turned his attention to teaching. He fondly remembers duking it out on the range at Glen Abbey GC in 2005 and 2006 with the likes of Reggie Millage, Connor O’Shea, Sean Casey and Sean Foley as they fought to find their place in the golf teaching/coaching landscape.

“I think once I found that I could do this for a living with other “truth seekers” I was hooked.  By 2006 I had a full schedule teaching 10 to 12 hours a day, but half of those lessons were free,” says Starchuk who first picked up the game going into Grade 9 when his parents bought a home backing onto Kanata Lakes GC and he joined Royal Ottawa GC and Hylands GC shortly thereafter. “That was the business model for the first few years, get out there and teach and learn and get some exposure so people would see you and get to know your name.”

“Today, I don’t have to take everything that comes my way. Most of my students sign up for six months to a year,” says Starchuk, who married his long-time sweetheart, Krystyna, back in September.  She was the first person he met when he showed up for work at Glen Abbey in 2005? “I like to keep it one-on-one when it comes to teaching. I’m not a big fan of group lessons. I believe you need face time with your students and you really have to listen to what they are saying and feeling about their game.”

Starchuk, who relies heavily on FlightScope for his teaching, has an insatiable appetite for learning and understanding more about the golfers’ swing, mind, and body. As a professional, he has travelled all over North America to learn from the best instructors, trainers, coaches, scientists and mentors to feed his desire for answers. He has attended over 300 hours of professional development seminars on topics such as fitness, biomechanics and the mental game of golf. Starchuk is also a member of the Proponent Group which is a worldwide group of the leading golf instructors who help golf professionals create brands and learn how to market, advertise, and align themselves with other groups as the days of simply being a PGA member at a club are gone.

While the PGA of Ontario and PGA of Canada Teacher of the Year Award have been on his radar for the last two or three years, it was probably his work at Mississaugua this past season that finally pushed him over the top. He received the green light from the club’s Director of Golf, Dennis Firth to launch The Academy at Mississaugua. “Nick’s state of the art programs covered all areas; highlighted by specialty schools such as Wedge Masters and The 4 Keys to Putting. His teaching style gracefully balances state of the art technology & teaching aids with timeless fundamentals,” Firth says.

Starchuk also revived the virtually dead junior golf program at the club with over 40 juniors enrolling in its first year. He created and championed a brand new initiative called 3.6.9. Junior Golf Night (think 3, 6, 9 holes of golf based on age and ability). This fun and informative weekly program, provided 30 minutes of supervised coaching followed by 90 minutes of on-course activities and games. Different from traditional instructional program, juniors aged 7 thru 18, were introduced to etiquette, course care, different golf formats while understanding the respect of rules and camaraderie for their playing partners.

Two junior programs he’s most proud of are the Muskoka Woods Golf Academy and a junior program at St. Mildred’s Lightbourn School in Oakville. Both were founded in 2006 to offer juniors the ability to experience golf at an early age and have impacted hundreds of youngsters over the years.

Along the way he also spent the 2009/2010 school year working full-time at the Gary Gilchrist Golf Academy in Orlando training nine international teenagers, several who spoke very little English. Starchuk was responsible for overseeing their daily golf practice, workouts, school and traveling for tournaments and the experience allowed him to truly evolve into a golf coach for elite juniors.

His goal down the road is to provide his students the best opportunity to reach their full potential. To do that he’ll continue to focus on mind, body and swing for golfers of all ages and abilities.