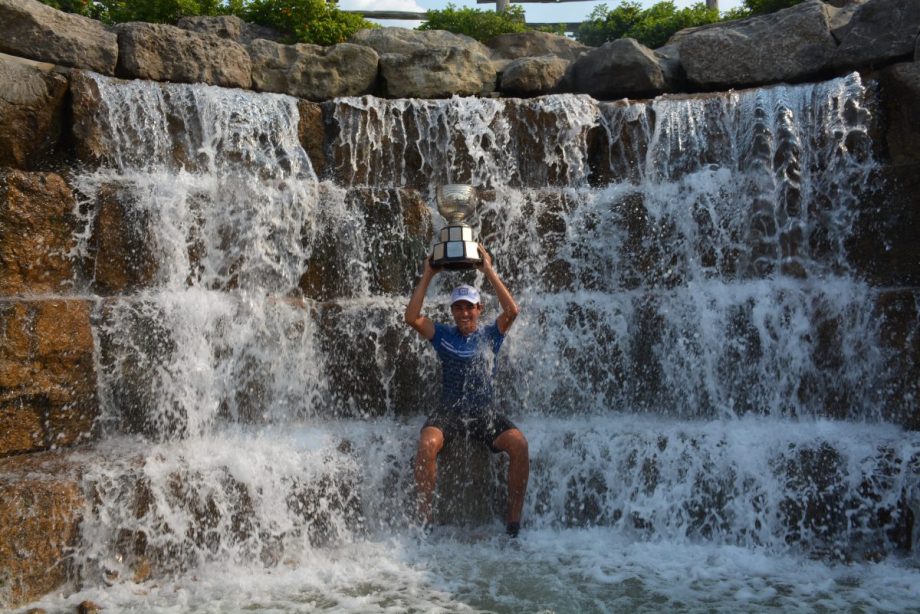 Cambridge, ON – Weather delays seemed to be the theme of the 99th Ontario Junior (U19) Boys’ Championship, as Whistle Bear Golf Club experienced an early morning storm creating a delay in tee times. Delayed 70 minutes heading into the final round of the championship, players teed off at 8:40 a.m. with sunshine finally poking through.

During his post win interview, Newton said “I’ve been coming to this tournament a lot over the past couple of years. I’ve always seen that everyone who’s won has played exceptionally well and I thought I played well enough this week to win it, and I did. It feels great and it’s the quite accomplishment, so I’m happy for what the future holds.” When asked what was going through his head coming down the stretch on 18, Newton commented “I saw all of the video’s cameras first, but I stuck to what I had been doing all week. I just had to hit four good shots; the fairway and two putted on the green.” With the championship win, Newton secures an exemption into the Canadian Men’s Amateur Championship. It takes place at Ambassador Golf Club from August 2-5.

The Ontario Junior (U19) Boys’ Championship also awards the top 28 competitors a quota spot for the Canadian Junior Boys’ Championship. This is quite the achievement and we wish you the best of luck in competition. This championship will be hosted at Vallee du Richelieu in Quebec from August 9-12.

Golf Ontario would like to thank the players, rules officials, staff, and members for their support of the Ontario Junior (U19) Boys’ Championship. To Whistle Bear Golf Club, Director of Golf Adam Tobin, Superintendent Tom Kinsman, and all their hard-working staff, thank you for being gracious hosts on such a spectacular course. A big thank you to the host club members and volunteers, as we couldn’t put on these championship events without your help. Lastly, a huge thank you to our sponsors and partners; Adidas, TaylorMade, Golf Talk Canada, Play Golf Myrtle Beach, Humber College, HUB International, BioSteel, Golf Genius, Modern Golf, Dormie, Durham Artificial Grass, Foresight Sports Canada, Baka, Nikon, Solo Golf, and Sport Travel. We are grateful for your continued support.

To view the leaderboards from the 2021 Ontario Junior (U19) Boys’ Championship, visit our Golf Genius page. For media coverage, please visit the Golf Ontario Facebook page and view photo albums.

First contested in 1923, the Ontario Junior (U19) Boys’ Championship is open to male golfers 18 years of age and under, who have earned entry through one of our qualifiers held across the province, or earned exemptions from prior achievements. The event consists of 72 holes of stroke play competition. Past winners of the event include: Gerry Kesselring, Gary Cowan, Stu Hamilton, Mike Weir, Jon Mills and Albin Choi.