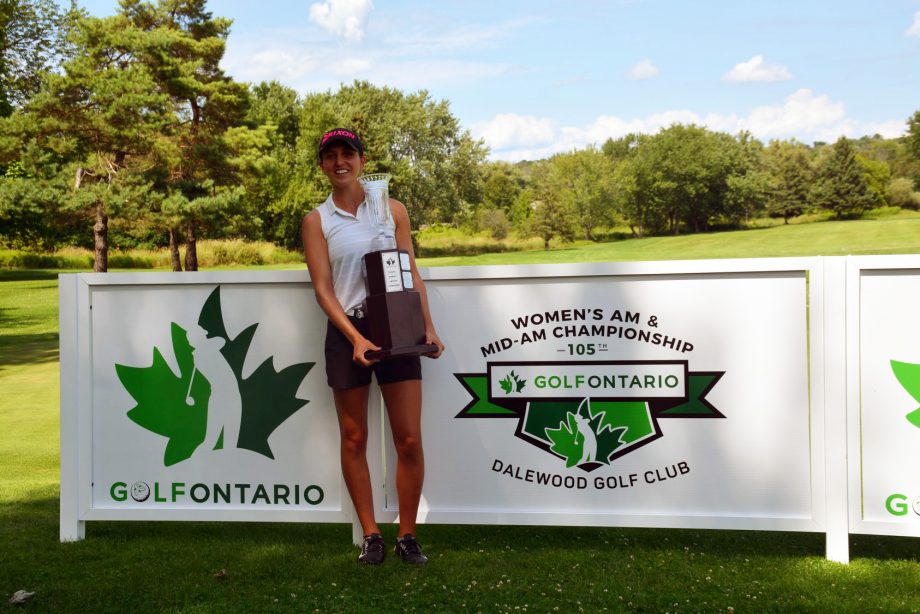 Sealing the deal with four consistent rounds of golf, Michigan State University golfer, Sydney Naro (Public Player), takes home the Ontario Women’s Amateur crown with an even par to end the championship (285). In a great fight for the silver and bronze, Brooke Rivers (Brampton GC) and Kristen Giles (Eagle River GC), went stroke for stroke most of the round with Rivers prevailing to finish second, one stroke behind Naro. Giles finished 2 shots off the pace for her third place finish. With three late birdies down the stretch, Rivers really put pressure on Naro to hang on to the lead. Giles also had a birdie streak of her own down the back nine but just like Rivers, couldn’t quite catch the leader.

“The conditions were a lot calmer, so there was definitely a chance for a lot of birdies out there. I just tried to play my game one shot at a time and it worked out pretty well”, said Naro when asked what made the difference for the final round today. As a varsity golfer for Michigan State, Naro plays “out of Forest Akers West when in Michigan, but in Canada, I play out of Windermere Golf and Country Club”. When asked if any holes were more challenging than others, Naro explained “the par threes are definitely very long and I’d say number ten was a tough one. I was trying to make birdie all week and couldn’t make birdie on number ten. Number one was a little scary as it’s a long hole, but other that than I really liked the course and had a lot of fun”.

Golf Ontario would like to thank the players, staff, and volunteers for their support of the Ontario Women’s Amateur and Mid-Amateur Championship. To Dalewood Golf Club, Head Golf Professional Brad Pemberton, and all their hard-working staff, thank you for being gracious hosts and for providing us with such valuable volunteers. Lastly, a huge thank you to our sponsors and partners, Adidas, Taylor Made, Modern Golf, Dormie Workshop, Durham Artificial Grass, Humber College, Barcelo Bavaro Grand Resort, Baka Mobile, and Play Golf Myrtle Beach. We are grateful for your continued support.

For full results and information on the championship, visit the official championship page here.