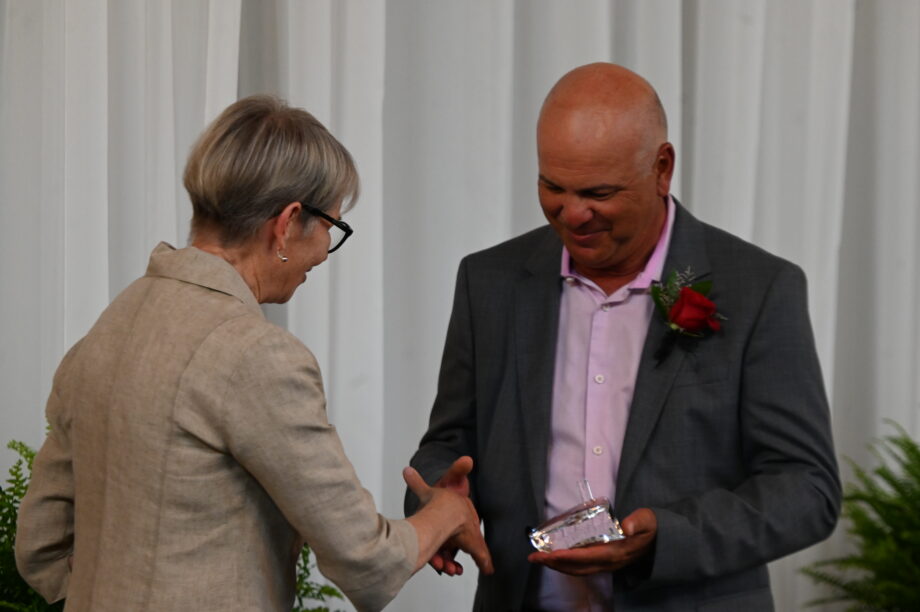 An emotional night of laughs, tears and sentimental stories was long overdue after a two-year hiatus thanks to the pandemic. With that hopefully behind us, Golf Ontario was extremely pleased to announce the newest members inducted into the Ontario Golf Hall of Fame.

Danny Mijovic enters the Ontario Golf Hall of Fame in the Professional Golfer category after 35 plus years as a golf professional.  Currently, the Director of Instruction at Kings Riding Golf Club and King Valley Golf Club since 2005, Danny Mijovic includes a number of milestones and accomplishments in his illustrious career from college through his amateur and professional playing years.

Mijovic is a four-time NAIA All-American and holds numerous course records worldwide.  His tour travels and participation include the Canadian Tour and the Asian, Australian, European, South American and Great Lakes Tours.

At the amateur level, Danny also amassed a number of accolades highlighted by being a 1982 Willingdon Cup team member, the Number 1 ranked Amateur in 1983 and Canadian Amateur Champion, a top 5 US amateur ranking in 1984 while winning the Porter Cup and Mid Atlantic Amateur Championships.  Mijovic was a 2nd place finisher at the 1996 South American Masters with a course record 61 at Sao Paulo GC that broke a 40-year record held by Sam Snead. Danny was also Osprey Valley Classic Champion on the Great Lakes Tour in 2005 with another course record setting 61.

At the collegiate level, where he still holds the status of being the only player to ever win all four National Championships, his highlights playing for Texas Wesleyan University include winning 9 individual tournaments, being named All-American 4 times and being inducted into the Texas Wesleyan and NAIA Halls of Fame.

“It’s a tremendous honour, especially looking at the names that are on that list, many professionals, people in the industry that I look up to and people I have grown up with,” mentioned Mijovic after the ceremony. “I’m quite honoured, very humbled and grateful.”

He has won a total of 15 provincial championships as well as 5 national championships along with many others.  Prior to his professional career, Brian was the number #1 ranked amateur in the Province of Ontario in 1996 and 1997.

He played professionally on the Canadian Tour 1999-2003 and on the Nationwide Tour (Korn Ferry Tour) 2004-2006. He is the all-Time money leader on the Great Lakes Tour and as of now he is also 3rd on the PGA of Ontario’s all-time money list.

In 1993 he was named by the American Junior Golf Association (AJGA) to the Rolex Junior Boys 3rd Team All-American. (Tiger Woods was on the 1st Team).

On the international stage, he represented Canada at the World Amateur Team Championship in 1996 in Manila, Philippines and at the Four Nations Cup in Kyoto, Japan, in 1997.  He represented Ontario at the International Amateur Team Matches in Lima, Peru, in 1996 and 1997, where his 2-man team finished 2nd and 1st.

Brian has become a great mentor to junior golfers and one of the country’s top coaches to golfers of all skill levels.  His professionalism and personality are what make him such a great ambassador for the game of golf and particularly golf in Ontario.

“Lot of emotions, just reminiscing looking back and going wow that people recognized,” exclaimed McCann. Again I’m very honoured, very humbled to recognize how many great players that came before me that I had a chance of knowing and looking up to; being included with them is pretty cool.”

Jon Mills hails from Belleville, Ontario, where his home club affiliation was the Bay of Quinte Golf and Country Club from 1985-1997.

Jon enters the Golf Ontario Hall of Fame after an outstanding amateur and professional career with many achievements at the Provincial, National and International levels.

While competing within Ontario, Jon’s winning ways started when he won the Junior Boys Championship in 1996, Junior Boys Champion of Champions that same year, and was also a member of the Ontario Junior Interprovincial Team. Five years later, in 2001, Jon’s accomplishments included winning the 2001 Ontario Men’s Amateur Championship as the #1 ranked amateur golfer in Ontario and being a member of the Willingdon Cup team.

A Three-time member of Golf Canada’s National Team in 1999, 2000 and 2001, Jon also had success on the International Stage, competing at the 1999 World Amateur Preview Championship, the Eisenhower Trophy in Berlin in 2000 and was a member of the Canadian 4 Nations Cup team which they won In 2001. Jon held the #1 ranking in Golf Canada in 2000 and won the Golf Canada National Order of Merit in 2001.

At the collegiate level, Jon was a Mid-American Conference Freshman of the Year in 1998, All Mid-American Conference team member from 1998-2001, 1st team All-American in 2000 and 3rd team All-American in 2001. In 2002, Jon was a medalist at the NCAA Division 1 Central Regional. Jon’s accomplishments as a player saw him inducted into the Kent State Hall of Fame in 2007, the same year he was named Score Canadian Male Golfer of the year.

On the professional stage, Jon won the Manitoba MTS Classic in 2002 and the Canadian Tour Order of Merit. While competing in Independent Professional Tournaments, Jon won the Toledo Open and Western Pennsylvania Open. While on the Nationwide Tour, he won the 2005 CPGA Championship and the Boise Open in 2007. Jon’s PGA career included 70 PGA Tour Events with career winnings of over $576,000 and on the Web.com Tour and additional 184 events amassing winnings of over $1.2 Million. During this time, Jon qualified for three US Opens at Oakmont in 2007, Torrey Pines in 2008 (where he tied at 36), and Congressional in 2011.

Mills now uses his skills and expertise to shape the next generation of golfers. Currently the Head Coach of the Golf Team at Kent State University since 2019 after serving as Assistant Coach since 2016, he helped lead the team to 5 Collegiate Championships and the Mid-American Conference Title in 2016-2017 and in 2019, advanced to the NCAA Championship.

What does it feel like to be inducted into the golf Ontario Hall of Fame?

“It’s obviously special to go in there and know my dad is in the Hall of Fame and that I’m in there now,” said Mills. “There’s a lot of great people who meant a lot to golf in Ontario and Canada; to be recognized in that group, I think it’s incredible.”

Born August 22, 1928, in Dundas, Ontario, Nick Genovese’s accomplishments as a golfer are numerous and span over fifty years, including an incredible thirty championship titles in Ontario, Western Canada and Nationally. On the International stage, his accomplishments included an incredible six Consolation finals Championships between 1950 and 1965.

Later in his playing career, he added to these twenty championship titles with Ontario Visually Impaired Golf (OVIG) being declared the Totally Blind Division Champion seven times between 1991 and 1998 as well as OVIG Totally Blind Senior Men’s Champion three times between 2001 and 2004.

In 2004, at the age of 75, Nick Genovese was named the Oldest Totally Blind Golfer in North America.

Beyond the aforementioned provincial, national and international accolades, not to be forgotten is the May 31st, 1952 celebration on National Golf Day where Nick was awarded a medal for “I beat Ben Hogan” at the Burlington Ontario Golf and Country Club.

Perhaps no surprise given his golfing prowess, Nick Genovese was a multi-sport athlete recruited by the Brooklyn Dodgers in early 1946.

Mr. Genovese lost his sight due to a welding accident on Friday, April 13th, 1946. He took up golf in 1950 and was devoted to encouraging other sightless individuals to pursue their dreams in sport, business and life.

Although well known for his accomplishments in golf, Nick was even more well known for his singing prowess, having won several Kiwanis, CBC and CNE competitions. A winner in “The Voices of Tomorrow” Contest sponsored by a Buffalo, N.Y., T.V. station, Nick represented Upper-New York State at the Chicagoland Music Festival at Soldiers Field, Chicago, accompanied by a 100-piece symphony orchestra, before 80,000 people.

Nick was a mentor and an inspiration to many, as well as a staple to the sport of golf for the visually impaired.

“The first thing I did was cry because I was so proud of him,” mentioned his son John who accepted on his behalf. “I wished that he could have been here himself to tell his stories because he had a lot of them and played for a long time. As a family, we worked hard to put this together because we had to find proof that dad won as many championships as we thought he won.”