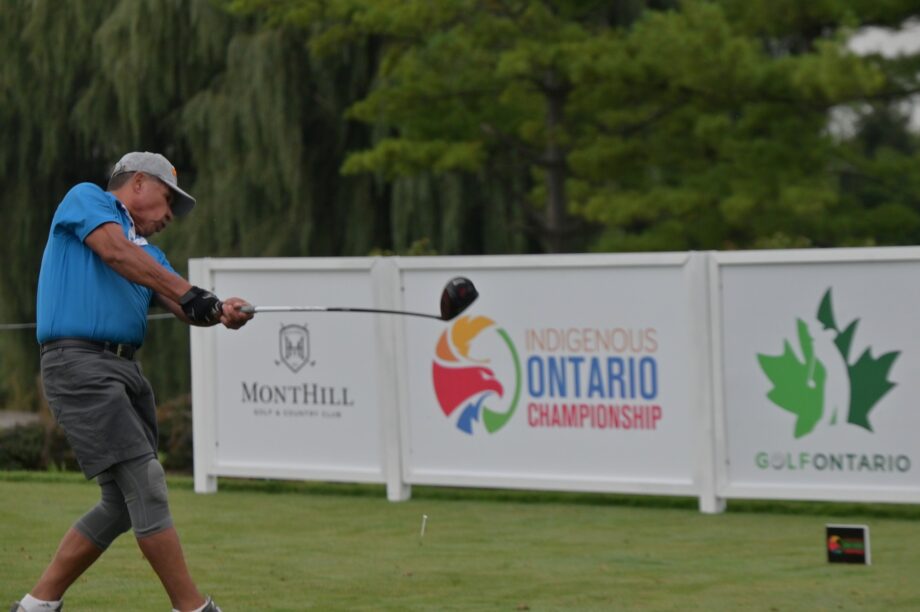 John Monture (Lower Mohawk Six Nations) leads the way in the Men’s overall division after a blazing 7-under (65) opening round, including eight birdies. Close behind sits Ian Ford (Lac Suel First Nation) with a strong 4-under (68). Ford said, “getting to have an event that’s Indigenous focused is great for Native golf and Canadian golf as a whole, to hopefully have that ripple effect for years to come. You kind of hold it closer to your heart and it means a little bit more playing for your community.” Della Bomberry (Lower Cayuga Six Nations) holds a one-stroke lead in the Senior Men’s category over John Monture Sr (Upper Mohawk Six Nations) after his first round 4-over (76).

Lucas Rogers (Kettle Point First Nation) currently has the lead in the Junior Boy’s category after an opening 6-over (78), while the top Junior Girl is Savana Smith (Delaware Nation). 14 year old Smith remarked after her round, “I think it’s actually really cool, being one of the first people to play this tournament… it’s really meaningful, knowing that we get an opportunity to just play.” As the youngest female player at the tournament, she added, “it’s kinda exciting actually, getting to compare myself to girls and women that are older than me.”

Also playing in the Championship is Regional Deputy Grand Council Travis Boissoneau (Ojibways of Garden River), who travelled from Thunder Bay, ON. to partake in this memorable occasion. He remarked, “it’s a world-class event… and as for young people getting into the game, I think golf is a perfect example of how you can approach your life, you’re playing independently, no one to blame but yourself, and you have to take responsibility. Boissoneau added, “I think for Indigenous youth to have access to events like this and to be working with Golf Ontario, it’s truly a privilege, and it’s something for us to look forward to… I can see this growing and seeing more people golfing and getting into the game.”

Sunday’s opening ceremonies from Monthill featured a kid’s golf clinic and dinner for participants of the event, as well as key representatives from the Host Association Golf Ontario, members of the local Indigenous community, and distinguished guests representing the Provincial Government.

Round two gets underway Tuesday, with tee times beginning at 8:30 am off the first and tenth tees. Please visit our Golf genius page here for more information on the tournament.

About the Indigenous Ontario Championship:

The Indigenous Ontario Championship will be played and hosted at MontHill Golf & Country Club, located in Six Nations, Ontario. This Championship, open to men and women of all ages, is a 36-hole competition featuring a Gross division and a Net Stableford division and recognizes the top junior and senior players. Golf Ontario has worked closely with Indigenous leaders to ensure this event provides players and spectators with a memorable provincial championship experience. In addition, the Championship will bring awareness to the growth of the game of golf and the impact it could have on the communities.