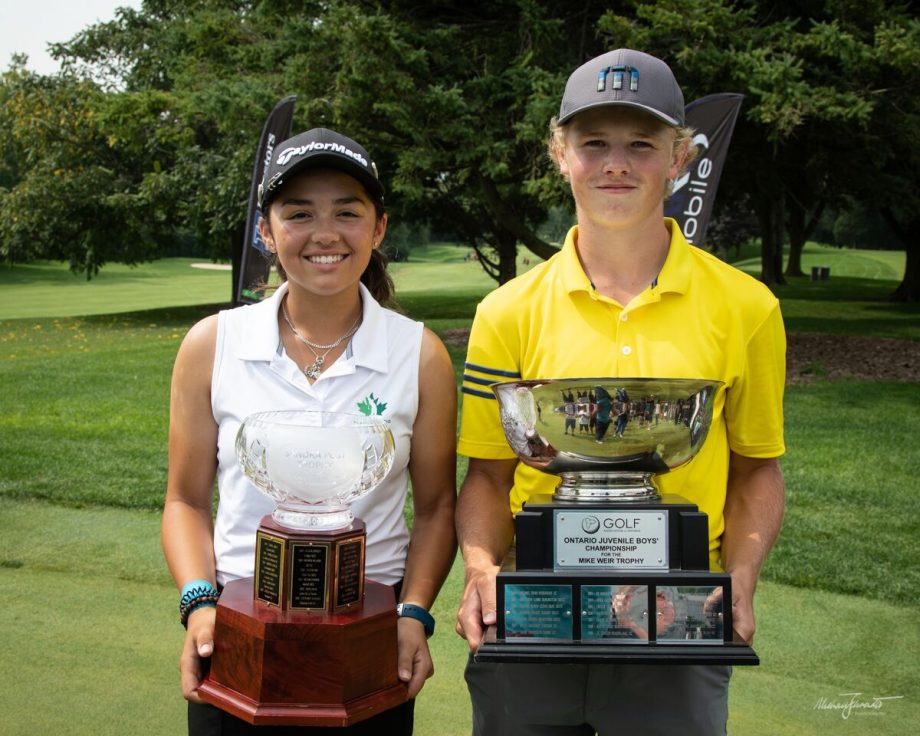 OSHAWA, ON – Team Ontario member Hailey McLaughlin of Granite Golf Club, had a great round on the final day of the Investors Group Ontario Juvenile (U17) Championship she went 78-73-72 for a total of 223 to win.  Today Hailey shot an even par 72. On the front nine, she was (+1) 37 with two bogeys and a birdie. She then headed out on the back nine (-1) 35 with one bogey and two birdies. Brooke Rivers of Brampton Golf Club was (+4) 76 today, and there was a two-part tie for third place between Jillian A Friyia of Highland Country Club and Alexis McMurray of Glen Abbey Golf Club.

McLaughlin had a great even par round today, “I was making a lot of putts on the back nine especially, which was really good … I had a bit of space on the back nine to be a bit more aggressive so I took that chance, and I took that risk, went for it, and it paid off in the end” – Hailey said. She also said that winning her second Golf Ontario Championship of the season feels even more special due to this one being her last this season, “it was a great way to cap it all off”.

The tie on the boys’ side consisted of Ethan Cardwell of Oshawa Golf and Country Club, who shot 69-76-72, for a total score of 217 and Michael Ikejiani of Barrie Country Club, who shot 74-72-71, for a total score of 217. The competition was just starting when they tied on the 18th hole after they both sunk great putts that forced a playoff.  Cardwell was triumphant at his home club after 5 playoff holes where a large crowd gathered around to watch him win. He felt his knowledge of the course was a huge advantage for him in the Championship and played a few risky shots during the playoffs, but got away with it due to his knowledge of the greens. Heading into today’s round, Cardwell said that “having that lead was nice to fall back on … and I just felt confident, I knew if I played patient and slow golf I could get the job done” – Ethan said.

Ethan Cardwell thanked his competitor Michael Ikejiani for his perseverance through the 3 days of the championship and the 5 playoff holes of golf.  Cardwell is extremely proud to have won at his home course with family, friends, and fellow members here to support him. “It was pretty special. I’ve never heard a roar like that in junior golf before. I got pretty excited being on the 18th green, and having hundreds of members here, family members, and players in the tournament here supporting me, it was an awesome experience” – Cardwell said.  This was Cardwell’s last tournament of the season as he heads to training camp for the Saginaw Spirit in Michigan in two weeks. He is looking forward to having a successful 1st OHL season this year and said he’ll be back for more golf next golf season.

McLaughlin and Cardwell both took the opportunity to speak once they received their trophies to thank their supporters, Oshawa Golf and Curling Club, the staff, volunteers, their peers, and a special nod to their parents, who they both thanked sincerely.

Thank you to the beautiful Oshawa Golf and Curling Club for hosting the Investors Group Ontario Juvenile (U17) Championship this week.  Golf Ontario would also like to thank the amazing course volunteers, members of the Oshawa Golf and Curling Club for their support of the championship.  Another thank you goes out to the rules officials and tournament officials who made this championship possible. Lastly, thank you to the players for participating in this championship.