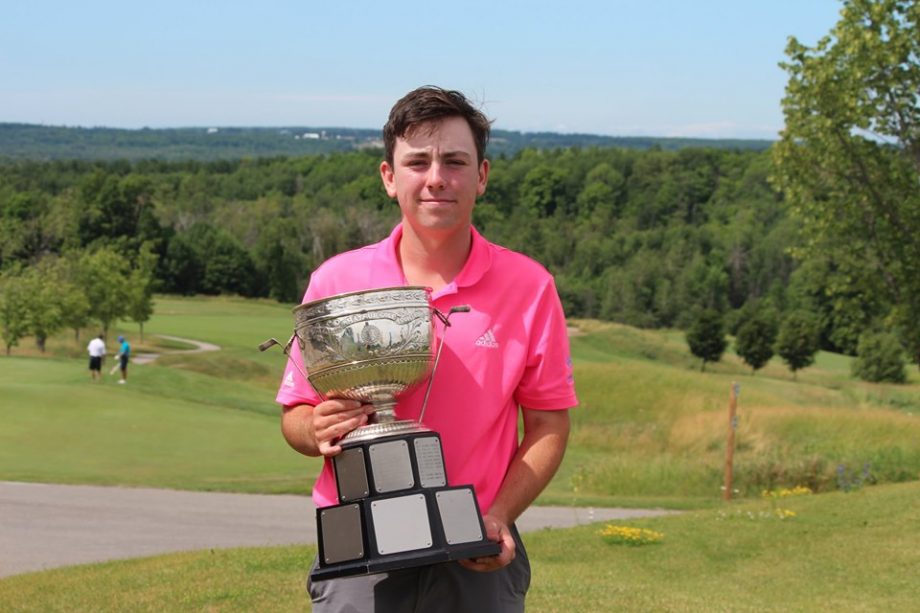 Thornton, ON — An exciting final round of the 97th annual Junior Boys (U19) Championship got underway today at Tangle Creek G&CC. It was a hot and muggy day, with some heavy competition taking to the field. The 63 players came out in hopes of leaving a champion but after a well fought 18 holes, only one could remain.

After an impressive round, it was Ashton McCulloch (Cataraqui G&CC) who stole the show with a total score of -7 once it was all said and done. McCulloch entered the day trailing Team Ontario’s Robbie Latter (Credit Valley G&CC), but took off hot and was able to steal the lead early. Kicking off his round with two straight birdies off the first two holes, McCulloch never looked back. The 16-year-old (turning 17 tomorrow) notched four birdies on his front nine, and played steady the rest of the way through. The only time it looked like he was about to lose the lead was when he chipped a shot over the green and then missed the following shot to double bogey 15. To many that would have been a momentum shift, but despite having two veteran Team Ontario members hot on his heels, McCulloch was able to keep his composure and retake the lead with a few par shots while both Latter and Dylan Henderson (Westmount G&CC) bogeyed the following difficult holes.

The trio entered the final hole sitting one stroke apart (McCulloch at -5 and the other two at -4). With a crowd building up to watch the three finish off the tournament, it was McCulloch who yet again stole the show. As he stepped up to the 35 foot uphill putt, he knew if he could somehow sink it in the championship was his. It felt like time had stopped as he leaned over the ball and tapped it down the green. Slowly the ball rolled and as it neared the cup the eyes of fans began to widen. Slowing just before the hole, the ball had just enough to drop and at that moment, McCulloch had become a champion.

“I hadn’t even realized I’d won after I made the putt,” said McCulloch. “I was just in shock that it actually went in, nothing else even mattered in that moment.”

Although it was McCulloch who ended out on top, it was a far from easy path. Henderson and Latter both trailed closely the entire way through, making it a very competitive showing. It wasn’t clear who was going to win up until that very last shot on 18. The duo placed second and third, with Henderson ending the round with a final score of -5, and Latter with a final score of -4.

“Going up against such tough competition, it’s definitely a nice feeling knowing I can keep up with those guys,” said McCulloch when asked about facing off along Latter and Henderson. “It makes this win even more special.”

After placing in the top three, the three players all received exemptions into the 2019 Ontario Open, where they will face off against the best talent in Ontario.

Golf Ontario would like to thank the competitors, their families, and everyone who attended and supported this championship.  We would also like to thank the Tangle Creek G&CC for their excellent course and hospitality in hosting this event.

Golf Ontario would like to thank Tangle Creek G&CC and their staff again for their support of the Ontario Junior Boys (U19) Championship.