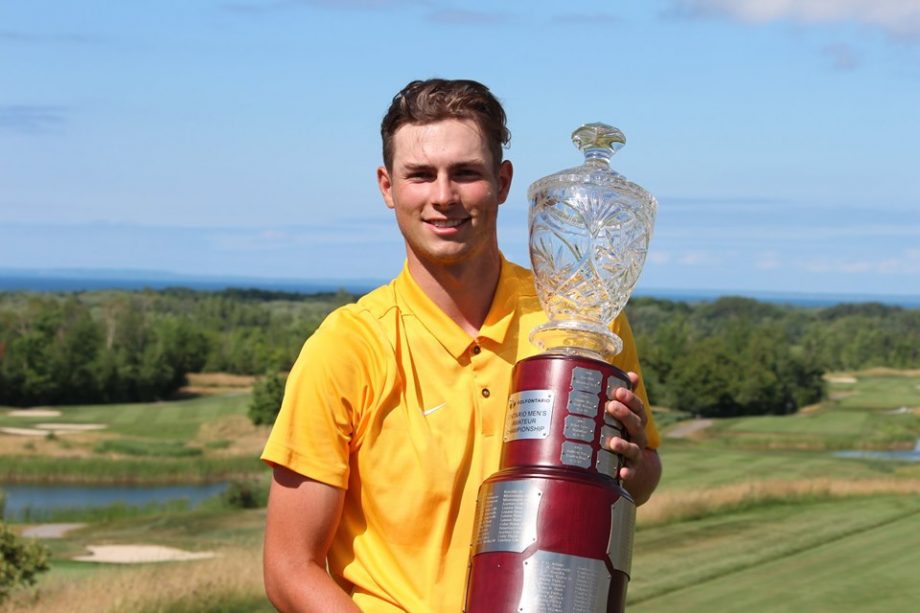 Collingwood, ON — Windy conditions ushered in day four welcoming the 63 remaining players who took to the course to for the 97th annual Men’s Amateur Championship. It was a competitive field throughout the entire week, but it was Matthew Anderson (Credit Valley G&CC) who came out on top to win it all.

Anderson entered the day trailing his former Team Ontario coach Charles Fitzsimmons (Thornhill Club) after a hard fought battle between the two in the third round. Trailing by one heading in, Anderson played with composure not many 19-year-olds have. He started the day off with steady play, never hitting into the rough and never overstepping his abilities in an attempt to take the lead. Instead, he let the game come to him.

The front nine started as a very close race between the two competitors. Both sat at even through the first four holes until Anderson birdied 5 at the same time Fitzsimmons scored a bogey. Anderson would continue to roll and birdie 7 while Fitzsimmons would post another bogey, dropping him four strokes behind Anderson through seven holes.

Just when it was looking like Andersons championship, Anderson went on a four hole bogey streak, allowing Fitzsimmons to tie, and later take the lead. The young player seemed rattled and couldn’t get any of his shots to fall. Nonetheless, even in adversity, Anderson dialed in and focused and returned to his natural state of calm play.

The last four holes proved to be as close of a race as possible. Both competitors were lights out down the final stretch of the tournament and there wasn’t a sure sign of a winner at any point. Anderson birdied the 16th hole to tie them up at 5-under, and then birdied 16 to take the lead. The two hit both scored par on 17, and then finally took to the eighteenth hole.

Anderson hits his tee shot into the bushes on the side of the fairway, and Fitzsimmons used the opportunity to play it safe to set himself up for the rest of the hole. Fitzsimmons then launched a shot onto the lip of the bunker at the same time Anderson miraculously hit it out of the bushes onto the fairway. The two both chip onto the green 15-20 feet away from the hole, and Fitzsimmons then almost steals the hole with an outstanding putt that ends up lipping the cup. It was at that moment, that Anderson knew all he had to do was tap in an easy putt for par to win it all.

The former Team Ontario student bent over the hole to pick up his ball as the crowd cheeeds on the new champion. Fitzsimmons high fived him and congratulated him on his achievement. “Maybe I taught you too well,” he joked. Anderson finished the tournament with a total score of 6-under (278), only one stroke ahead of Fitzsimmons.

“It was a lot of fun playing against Charles,” said Anderson. “I’ve know him for a long time so we all felt comfortable going up against each other.” Anderson also commented on how he kept himself so poised after his rough stretch. “I just tried to tell myself that I was fine. I was still only one behind and I couldn’t change the past, so I had to focus on the future and move on from there.”

Following closely behind the two leaders was Ty Celone (Public Player). Celon had an outstanding showing over the four rounds. Having to battle tough competition like Noah Steele (Cataraqui G&CC), and Daniel George (The Summit G&CC), Celone didn’t have an easy path to the bronze medal placement. The former Team Ontario player finished the week with a total score of 1-under (283).

The three top players also received exemptions to the Ontario Open which will be occurring August 26th-29th, where they will get to play against some of the best competition in the world.

For full scores and information on the entire tournament, please visit the official tournament page HERE