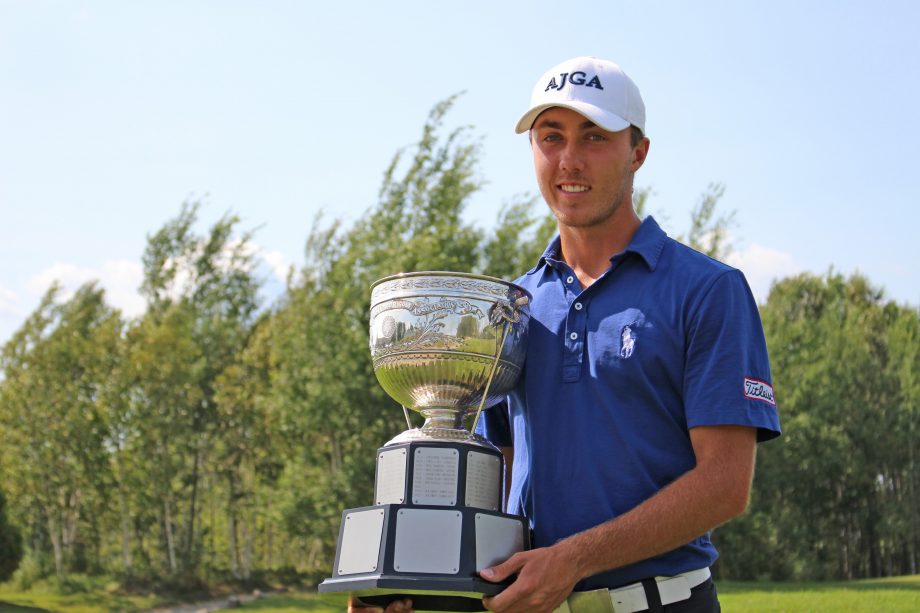 GARSON, ON — Entering the final day of the Golf Association of Ontario’s (GAO) 2014 Investors Group Junior Boys’ Championship, July 18 at Timberwolf Golf Club, Waterloo’s Matt LeMay was three shots and four spots back of the lead. However, a spectacular round of five-under (67) catapulted the 18-year-old Whistle Bear Golf Club member to the title.

The final round began with Sutton West’s Carter Simon and Cayuga’s Charles Corner in a tie for the lead at even par. But LeMay would have a bogey-free round to help him make up ground. LeMay birdied the first hole and then pared the rest of the front nine. He began the back with a birdie on 10 followed by an eagle on 11. LeMay sealed the win with a birdie on 18 to claim the championship.

After the victory, LeMay spoke about how he felt like he was in the zone for the final round. “I felt good, I hit it well but could have hit it better, there is always that. You can always hit it better, but I just really felt in control. The course seemed easy to me today.”

“It feels good to win, I haven’t won in a while especially a GAO event. The course (Timberwolf) got me the first day, as I was six-over, since then I fought back. Heading into the day I knew I could come back, I have done it in other tournaments so there was no other thought in my head. Now to have my name on the trophy with so many other great names, is an amazing feeling.”

As for Corner, he began the day with birdies on the first two holes. However, his round included five bogeys and he would finish at two-over (74). His score still was good enough to hang on for second place at two-over for the tournament.

The low round of the day, next to LeMay’s, went to Ancaster’s Josh Montgomery. Montgomery began the day with an eagle and despite a trio of bogeys he still managed to card a three-under (69) to earn a share of third place at three-over for the tournament.

Whitby’s Spencer Dobbs was in contention throughout the week. His final round finished at one-over (73) and he too earned a bronze medal at three-over.

The trio that tied for third were forced into a playoff to see who would be the final representative for Team Ontario for the Inter-Provincial competition at the Canadian Junior Boys’ Championship, July 29 – Aug.1 at Legends on the Niagara (Battlefield Course). After the playoff, Dobbs was the last man standing as he joined LeMay and Corner as the representatives.

Heading into the Canadian Championship, LeMay now has a new confidence that he hope will translate into results. “I feel great going into it, so we’ll just see what happens.”

The Golf Association of Ontario would like to thank the volunteers, staff and members from Timberwolf Golf Club for hosting the event as well as Investors Group for their continued support of amateur golf in Ontario.