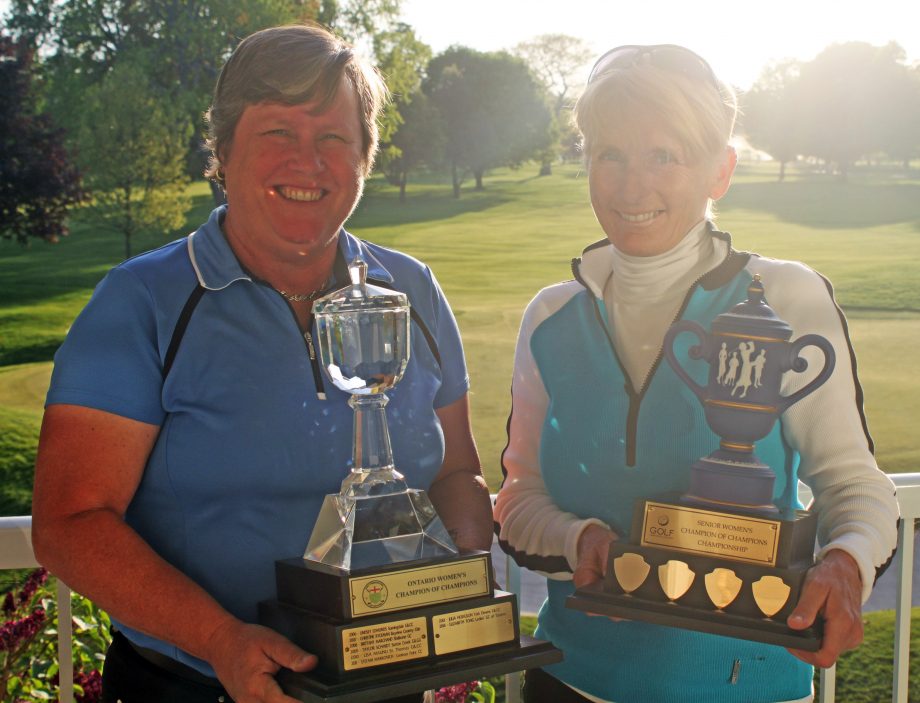 After 18 holes three players sat in a tie atop the leaderboard at three-over (74) resulting in a playoff between Aurora’s Mary Ann Hayward, Komoka’s Alex Amos and Ancaster’s Jennifer Lochhead for the Women’s Champion of Champions title.

On the playoff hole, Hayward put her tee shot in the middle of the fairway, while the other two competitors both found trouble on a steep incline. That led to Hayward, from the Club at North Halton, being able to two-putt for par and the win.

The win is one of many for Hayward who is a multiple time Ontario Women’s Amateur and Senior Women’s Champion. She spoke about her round after the exciting win. “It is still early in the season and I haven’t played a lot. I didn’t know what to expect and I played very poorly on the front nine. I got a rhythm going on the back nine so I was pretty happy about that. I hit a good tee shot down the middle on the playoff hole, while the others hit the trouble on the left. That took the pressure off and allowed me to get the win.”

The Senior Women’s Champion of Champions played out in a similar fashion. After 18 holes, three players all shared top spot at 11-over (82). Strathroy’s Jane Hedges McKinnon from Bear Creek Golf and Country Club, Stouffville’s Ivy Steinberg from Granite Golf Club and London’s Sue Postian from Sunningdale Golf Club all went back on the course to determine a champion in a playoff.

It would be Hedges McKinnon who was able to sink her par putt while the other ladies both made bogey, resulting in her capturing the first Senior Women’s Champion of Champions trophy.

“It a great honour to be the first name on this trophy,” said Hedges McKinnon. “I worked hard today to pull in the score that I did. The course played very hard but I really enjoyed it. You had to be patient because the greens were super fast and you could get discouraged if your putt went 20 feet past the hole. When I got to the playoff my opinion was you can only do what you do, so I kept it in the fairway and played it the same way as I did the first time. I had a similar putt and knew it would be fast, I had hit it too hard earlier so I slowed it down and tapped in for par.”

Steinberg and Postian shared the silver medal from the inaugural Senior Women’s Champion of Champions.

The GAO would like to thank Galt Country Club for hosting the 2015 event.

For full results and information from the Women’s Champion of Champions see the tournament page at: http://gao.bluegolf.com/bluegolf/gao15/event/gao1557/index.htm

For the Senior Women’s Champion of Champions see the tournament page at: http://gao.bluegolf.com/bluegolf/gao15/event/gao1588/contest/8/leaderboard.htm