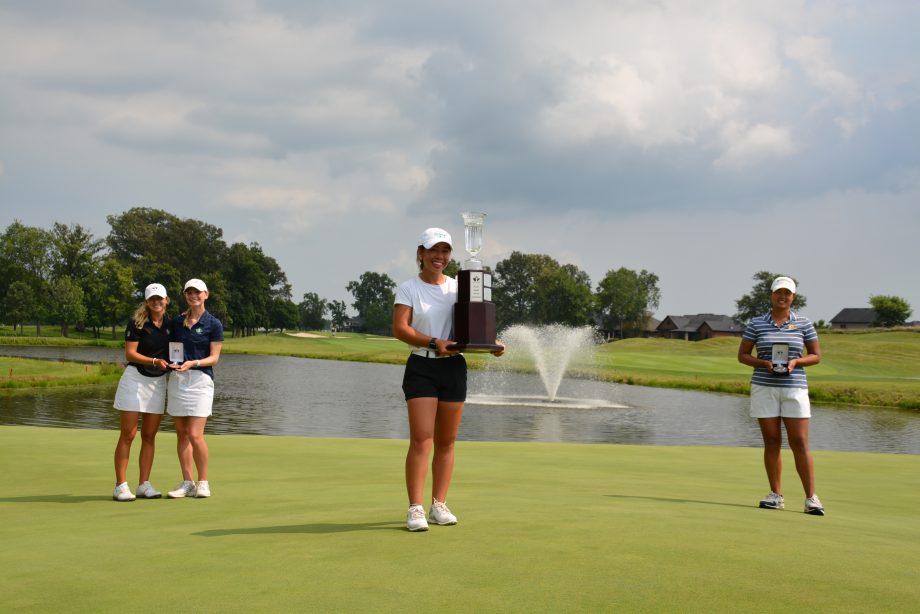 Amherstburg, ON – With the temperature feeling like it was in the mid-thirties, players battled the Thomas McBroom designed course as we witnessed competitors rise and fall on the leaderboard throughout the day. In the thrilling final round of the 2021 Ontario Women’s Amateur Championship at Pointe West Golf Club, the course record has been broken and a 106th Ontario Women’s Amateur Champion has been awarded.

Shooting a low round of 69 and a total of 280 on the championship to complete the 72-holes of competitive play, Jasmine Ly (Public Player) emerges as the newly crowned 106th Ontario Women’s Amateur Champion. The Windsor native is a 2018 Ontario Junior (U19) Girls Champion, 2019 Ontario Junior Girls’ Spring Classic Champion, plays NCAA golf at the Northern Illinois University, and qualified for the second consecutive year for the U.S. Women’s Amateur.

During the post win interview, Ly speaks of how great it feels to win the championship adding, “especially because I won it in my hometown.” Approaching the green, Ly expressed that she “was definitely nervous. I hadn’t looked at the leaderboard all day so I had no idea where anyone was. I just stuck to my game plan and tried to stay aggressive with that approach shot. My irons this week were really solid. I hit a lot of greens which helped for sure.” Final remarks include a nod to the spectacular condition of Pointe West Golf Club and a thank you to Golf Ontario for putting on such a great event. Ly will be celebrating her win over dinner with family and friends, including the silver medalist, Monet Chun, whom she played a lot of junior golf with.

In second place position taking home the silver medal, is Monet Chun (Summit G&CC), who had a stellar round of eight birdies to grant her the honour of a new Pointe West course record of 64. Chun is a sophomore at the University of Michigan and is only the second athlete on the women’s golf team to earn conference honours, which hasn’t been accomplished in 25 years. The bronze medalist position was earned by former Team Ontario teammates, Nicole Gal (Oakville GC) and Bo Brown (Blue Springs GC). Gal is a Team Canada National Junior Squad member and is the 66th Canadian Junior Girls Champion. Brown will be attending the University of British Columbia on a scholarship this fall, to pursue a Bachelor of Kinesiology and play on the Thunderbirds Women’s Golf team.

Golf Ontario would like to thank the players, rules officials, staff and members for their support of the 2021 Ontario Women’s Amateur and Mid-Amateur Championship. To Pointe West Golf Club and their passionate team – Head Professional Rick Schmidtgall and the Pro Shop Team, Greens Superintendent Matt Erickson and his team, Director of Food and Beverage Dave VanderHoeven, Executive Chef Vanessa Parent, and Host Club Volunteer Chairwoman Patty Marcus – Thank you to your staff and volunteers for being such welcoming hosts on a stunning track.

To view the leaderboards from the 2021 Ontario Women’s Amateur and Mid-Amateur Championship, visit our Golf Genius page.