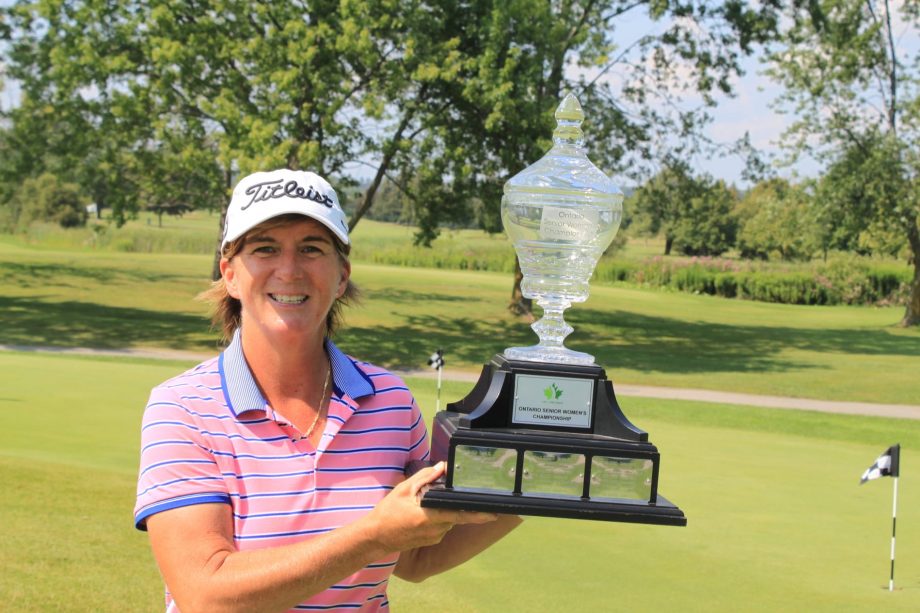 Whitchurch-Stouffville, ON – Once again, the Ontario Senior Women’s Championship, presented by Durham Artificial Grass from Spring Lakes Golf Club (North Course), started under pristine conditions. The temperature quickly rose and so did the play of leader Judith Kyrinis, recording her best score of the week and claiming the 2021 title by a whopping 14 strokes.

The now four-time Ontario Senior Women’s Champion, Judith Kyrinis (The Thornhill Club), fired a tournament best 4-under (67) including 4 birdies and no bogeys.  2020 Champion Terrill Samuel (Weston G&CC) finished second after a 3-over (74) to claim silver, while third was taken by Marion Reid (Islington GC) with a 7-over (78).

During her post win interview, Kyrinis commented that since “coming from Covid, this feels like I’ve won it for the first time again, so it’s kind of special. It feels like I haven’t won for a while.” When asked about her scores going down each day, Kyrinis added that “the putter finally came alive, it was a little bit in hibernation…, I’ve been hitting the ball really well and when the putter finally woke up the scores starting getting lower.”

Golf Ontario would like to thank the players, rules officials, and staff for their support of the Ontario Senior Women’s Championship. A big thank you to the beautiful Spring Lakes Golf Club, its members, volunteers, and staff for being so hospitable. Lastly, a huge thank you to our sponsors and partners; Adidas, TaylorMade, Golf Talk Canada, Play Golf Myrtle Beach, Humber College, HUB International, BioSteel, Golf Genius, Modern Golf, Dormie, Durham Artificial Grass, Foresight Sports Canada, Baka, Nikon, Solo Golf, and Sport Travel. We are grateful for your continued support.