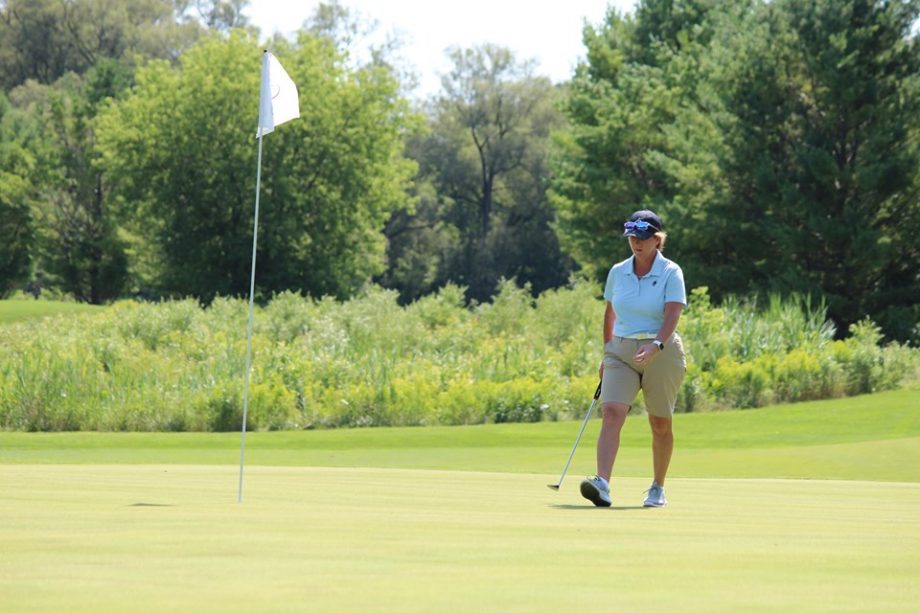 Waterloo, ON — Cool air and sunny skies welcomed the Senior Women as they arrived at Grey Silo Golf Course for the first round of the 58th annual Ontario Senior Women’s Amateur Championship. The day proved to be competitive as the players came out with some hot play.

Entering the day, all eyes were on Judith Kyrinis (Granite GC) as she embarked on her journey of winning her fourth championship in a row. The Ontario Golf Hall of Famer had been extremely strong in the tournament in years past, so the question leading up to the tournament was if she could continue her success this time around.

After 18 holes, it seemed like there was no slow in her step. Kyrinis finished her first round with a score of even-par (71), tying another Senior Women’s celebrity Mary Ann Hayward (St. Thomas G&CC) as the two past champions both had impressive showings. Kyrinis started her round strong with eight straight birdies, and despite a bogey on 9, the three time champ continued to push through and found herself carding a birdie right after on 10. She played a very cautious and steady game, rarely misplacing the ball at any point throughout the day.

“I just tried to keep the ball in front of me,” said Kyrinis. “I was hitting the ball really well from the start so I made sure to keep that same rhythm throughout.”

The same can be said for the four time champion Hayward. After a rocky start with two bogeys in the first five holes, the veteran player took matters into her own hands and began to play an impressive round with two birdies in three holes. With both players tied at even-par, it seems like the clocks have turned back a year. The two are quite familiar with each other, having been in the same position only a year ago at the 2018 Ontario Senior Women’s Championship. Both decorated players battled it out last year for the top spot, and although it was Kyrinis who was the eventual champion, Hayward only sat a few strokes behind. If things continue similar to today, there may very well be another battle of the legends on the final day.

“It’s always a lot of fun playing against Mary Ann,” said Kyrinis. “I wouldn’t be where I am now without her. Her competition keeps me locked in and drives me to be better.”

Trailing closely in third is Audrey Akins (Public Player) who sits only a single stroke behind the leaders. Akins had a fantastic round to start the tournament, always picking herself back up with a birdie after shooting over on a hole. Akins will be looking to keep this momentum heading forward into the second day of the tournament tomorrow.

Even with the leaders playing lights out, it was Ivy Steinberg (Granite GC) who hit the shot of the day. Nailing a 160 yard shot for eagle on the fifteenth hole, Steinberg sits in fourth only a few strokes behind the leaders.

In the A Flight portion of the tournament, it was Helen Williams (Station Creek GC) and Cathy Koszman (West Haven GC) who led the charge with scores of +9 after 18.

The tournament resumes tomorrow morning at 7:30 am, where the players will look to make some ground on the two champions before the final day on Thursday.