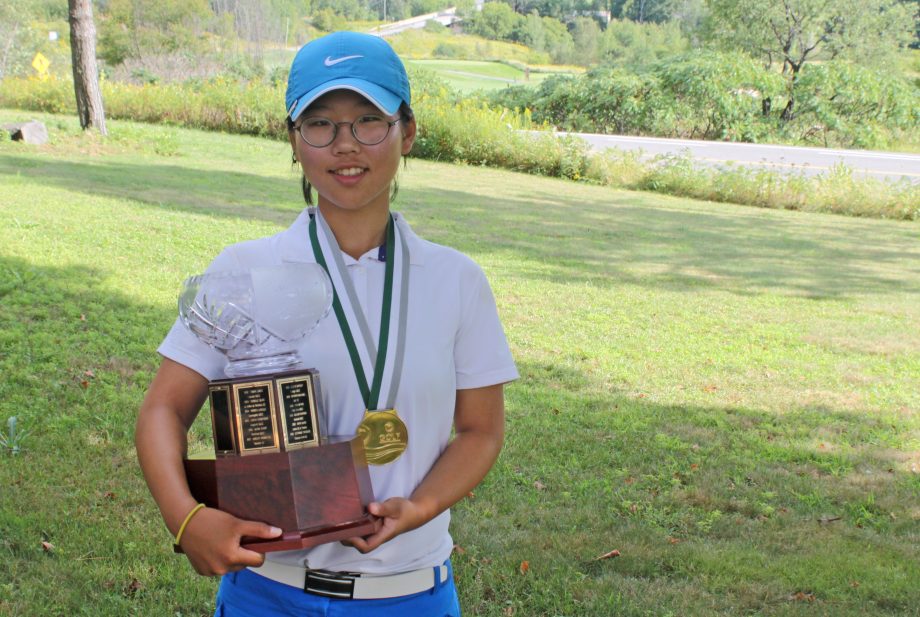 HUNTSVILLE— It was another soggy day at the Golf Association of Ontario’s (GAO) final round of the Ontario Juvenile Girls’ Championship on Aug. 20 from Deerhurst Resort Highlands Course in Huntsville. At 10:09 a.m. play was suspended for the second time during the event and the players remained in the clubhouse until 12:55 p.m.

The girls began the day on the back nine with two players well ahead of the field. Toronto’s Jennifer Yoon and Richmond Hill’s Monet Chun entered the day with just two shots separating Yoon, who was at three-under, and Chun at one-under. At the end of the day it was Yoon, 16 and a member at Station Creek Golf Club, who would hoist the trophy after a six-over (78) final round.

Yoon was able to limit any damage during the round considering the tough elements. She finished the tournament three-over (72-69-78-219). She spoke about how challenging the week was and what winning the title meant to her. “Winning this is great, it is my first provincial championship and it was just my 16th birthday so this was a very nice present to myself. The weather this week was interesting, but in the end it didn’t matter because my score was great. The two suspensions of play were tough because I was very tired during the second round, especially playing 27 holes, and even today.”

Earning the silver medal was Chun. Chun, a member of Team Ontario and The Summit Golf & County Club, had some strong holes like her eagle on the par-five 14th, but also some struggles and in the end, she was unable to catch Yoon. Chun finished the day six-over (78) to bring her tournament total to five-over (69-74-78-221).

Rounding out the podium with the bronze was Port Credit’s Chloe Currie. Currie, from the Mississaugua Golf & Country Club and a Team Ontario member, had the low round of the day as she carded a three-under (69). That brought her tournament total to seven-over (75-79-69-223).

For full tournament information, including the final leaderboard, see the tournament site at: http://gao.bluegolf.com/bluegolf/gao15/event/gao1526/index.htm

About the Ontario Juvenile Girls’ Championships

The Ontario Juvenile Girls’ Championship features the province’s best junior golfers under the age of 17 competing for the Sandra Post Trophy. Past champions of the event include Post, Jessica Shepley, Alena Sharp, Stephanie Sherlock, and Rebecca Lee-Bentham.