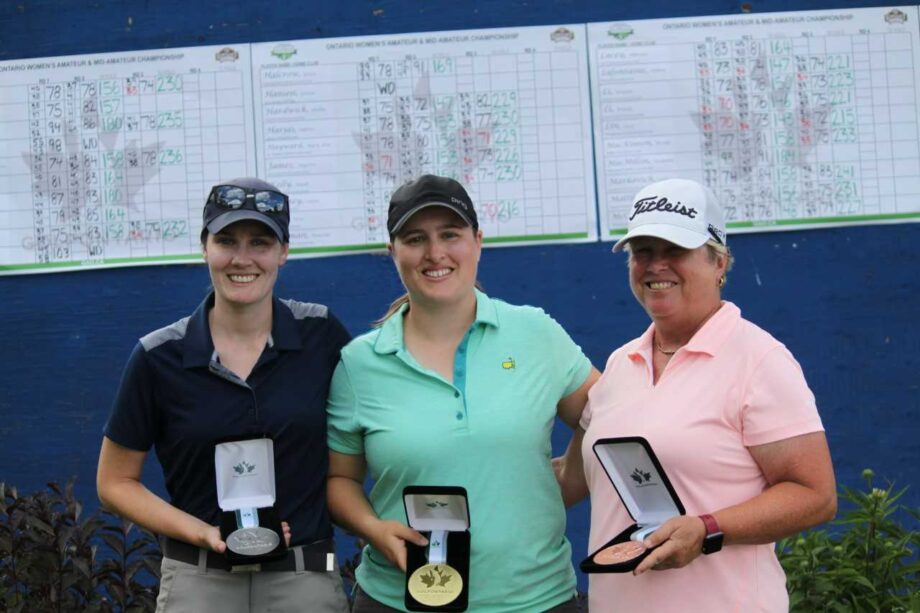 Bath, ON – With cuts taking place yesterday, the weather improved for round three, allowing the players to enjoy warm sunny skies and even better scoring.

There was a back-and-forth battle today at Loyalist Golf & Country Club today to see who was going to bring home the Women’s Mid-Am Trophy. At the start of the day Hayley McCallum (Glencairn Golf Club) was leading by an impressive five strokes, with a plus-four (148) and Augusta James (Briar Fox Golf & Country Club), Jessie Mercer (Cataraqui Golf & Country Club) and Laura McIntosh (Westmount Golf & Country Club) all tied for second with a plus-nine (153). Today’s round was close up until the very end with McCallum holding a 2-stroke lead coming into the 18th hole. However, with a spectacular drive, chip onto the green and an out-of-this-world putt dropping into the hole, James sealed the victory with a dramatic eagle. James gave a heartfelt speech after receiving her award and was able to celebrate with the many people on hand that she loves.

With the Women’s Am going into the final day tomorrow, many golfers have been working extraordinarily hard to be named the 2022 Ontario Women’s Amateur Champion. With round three in the books, Carlee Meilleur (Loyalist Country Club) will start the final round leading with at 6-under (247) with Swetha Sathish (Hidden Lake Golf Club) in second at 2-under (214) and both Lucy Lin (Shaughnessy Golf & Country Club) and Madison Barber (Landings Golf Course & Teaching Centre) tied for third with a 1-under (215).

For media coverage of the 2022 Ontario Women’s Amateur & Mid-Amateur Championship, please visit the Golf Ontario Facebook page to view our photo albums. To follow along with the leaderboard, visit our Golf Genius page.