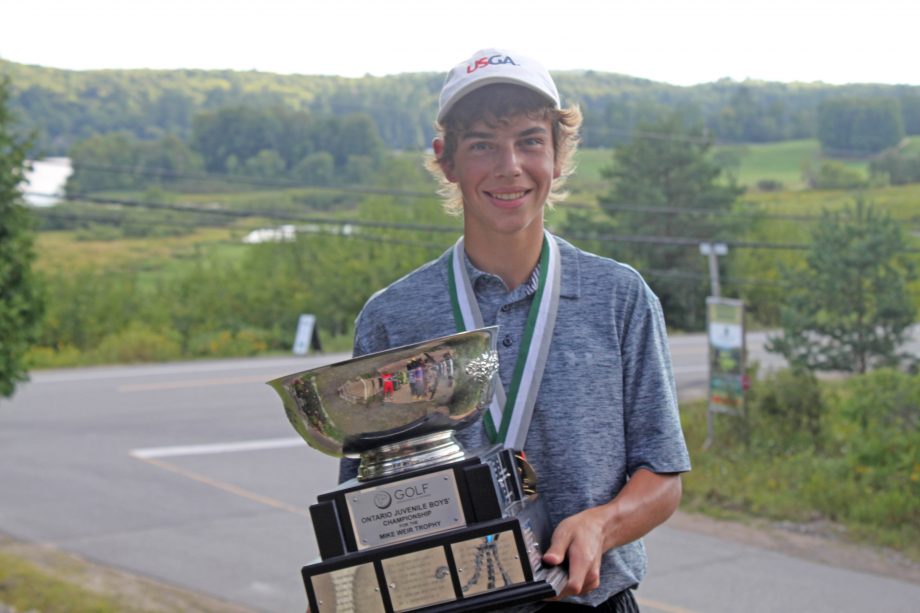 HUNTSVILLE— It was a long day for the Golf Association of Ontario’s (GAO) Juvenile Boys’ Championship when it wrapped up on Aug. 20 from Deerhurst Resort Highlands Course in Huntsville. The event saw another suspension in play during the final round, but by the end of the day all players were able to finish the round.

The day belonged to Almonte’s James Parsons. Parsons, from the Mississippi Golf Club, began the day with a one-shot lead. The 16-year-old, Team Ottawa member would see that lead through, finishing the day at even par (72). That brought his three-day total to one-under (71-72-72-215) and earned him the gold medal and juvenile boys’ trophy.

Parsons spoke afterwards about the win. “It feels pretty great! I was confident coming into the tournament that I could be a contender and to be in the final group was a great feeling. At the start of the day I was a little shaky, but heading into the last few holes I had a good lead, which calmed me down.”

The field and Parson battled tough conditions all week, but he said they didn’t really affect his game. “The weather wasn’t actually too bad, it just affected the first two holes that we played today. Both times that we came in, I knew I was playing well and even with the break, I could go out and perform the same way.”

Earning the silver medal was Thornhill’s Jason Chung. Chung, from the Diamondback Golf Club and a member of Team Ontario, rallied during the final round and was the only player to finish the round under par at two-under (70) for the day. That brought his tournament total to two-over (76-72-70-218).

Taking the bronze medal was another Team Ontario member, Vaughan’s Kelvin Lim. Lim, from Station Creek Golf Club, entered the day one shot off the pace at even for the tournament. However, he would finish the day three-over (75), dropping him to three-over for the tournament (72-72-75-219).

For full tournament information, including the final leaderboard, see the tournament site at: http://gao.bluegolf.com/bluegolf/gao15/event/gao1525/index.htm

About the Ontario Juvenile Boys’ Championships