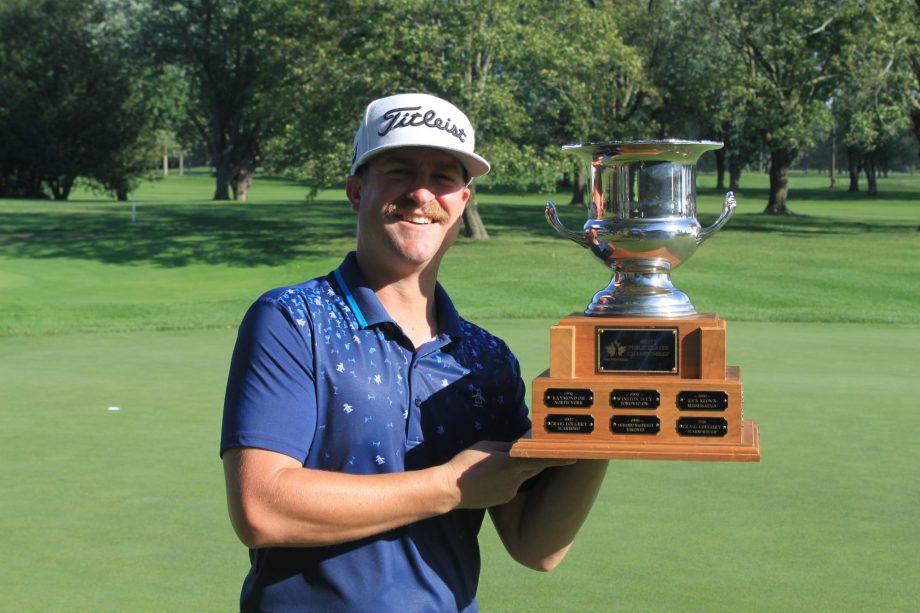 Gormley, ON – After a humid and breezy first round of the Public Player Championship presented by Baka, players enjoyed a mostly duller, wetter day of weather for final round play from the beautiful Meadowbrook Golf and Country Club. Temperatures in the high 20’s coupled with light rain in the morning and increased winds and occasional rain in the afternoon, made for a challenging yet fun day as players battled for Public Amateur supremacy.

With three championship flights up for grabs, golfers in the A flight (gross) and B and C flights (net) again took on the picturesque Meadowbrook course.

The overall winner and winner of the A flight (gross) competition was Aurora’s Kevin Holloway. Birdies on 11, 15 and and 18 secured him the victory with an even par round of 71 and +2 overall. His 2 day total was enough for a two shot victory over 2nd place finisher and day one leader Gavin Smith of Orangeville, who was one stroke ahead of 3rd place finisher Dan Kavanagh of Scarborough. Holloway, was understandably ecstatic with his win. “It’s actually really exciting, it’s the first tournament I’ve ever won”, said Holloway. He went on to talk about his round mentioning “it was pretty steady, considering conditions were very difficult with varying weather but playing with the other leaders kept me focused and I just took it one shot at a time”.

The B Flight and the first net score competition finished in regulation with a 2-way tie of +1 overall for the lead between Troy Darbyson and Ken Brace, both of Brooklin, requiring a 3 hole playoff.  Darbyson had the low round through both rounds shooting a 68 in round one to help build his early lead and hang on to reach the playoff holes, from which he would emerge victorious. Brace climbed the leaderboard today with a strong 69 final round to tie things up. Coming in 3rd place in this flight was Kyle Stolys of Richmond Hill, who finished three strokes back at +3 overall for the Championship.

The C flight Championship also ended in regulation with a 2-way tie for the lead between Zachary Peters and Andrew Garron. Peters and Garron both finished at +3 for the Championship, and went to a 3-hole playoff to determine the winner. After a closely contested playoff, Hamilton’s Peters emerged as the winner of the C flight.  2nd place went to Kingston’s Garron, followed by the 3rd place finisher Mark Rodrigues of Milton, who finished three shots back at +6.

For many competitors, this was their first experience competing in a Golf Ontario championship while others are seasoned veterans. The Baka Public Amateur Championship provides the perfect opportunity for those interested in trying a competitive tournament while providing gross and net flights. This allows higher handicap players to play against players in their handicap grouping. Anyone who has considered trying one of Golf Ontario’s events should look to the 2021 Public Amateur Championship presented by Baka as a great starting event.