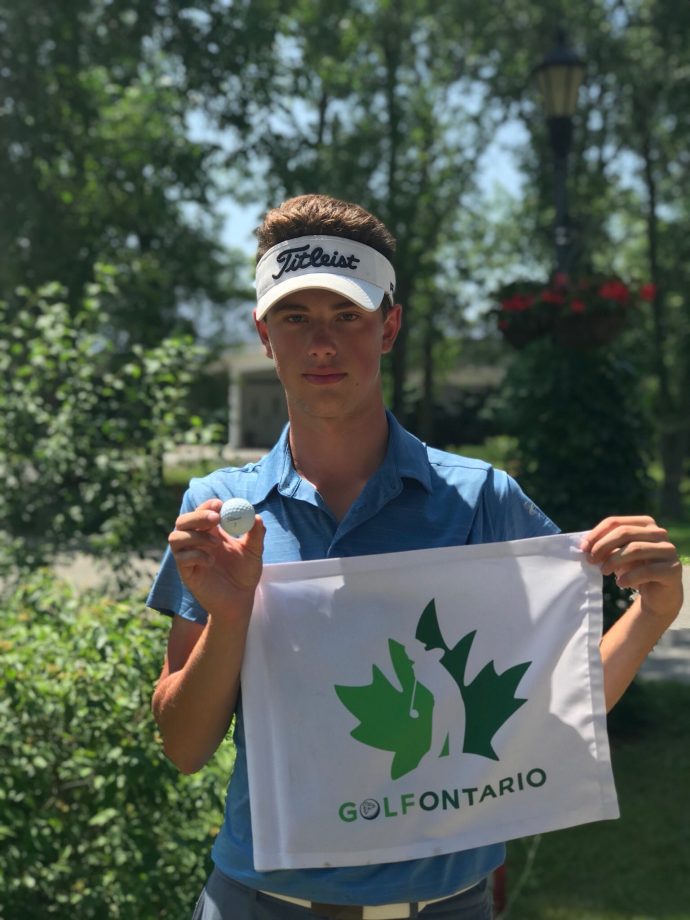 Today marked the end of round three for the junior boys’ championship, with Grand Niagara’s Nolan Piazza in the lead. He finished today with a score of 211(73, 69, 69), putting him only one stroke ahead of Credit Valley’s Matthew Anderson. In third place with a score of 214 is the previous rounds leader Robbie Latter (68, 67, 79) tied with Zachary Wylie (75, 69, 70).

The warm weather seemed to bring some luck to Luc Warnock who shot a hole in one on a par four (hole 14). Or perhaps it wasn’t luck, after all Warnock said this was actually the third hole in one he has had in his career so far.  The adrenaline of the moment set the boys jumping for joy as their cheers turned heads of spectators and fellow golfers. Warnock said that he “just screamed and threw [his] club and started high fiving everyone… it was the best.” He finished today’s round with a score of 74, but says that he is excited for tomorrow’s round.

In an interview with today’s leader, Piazza also felt confident about what tomorrows round will bring. Reflecting on his game today, he said that he thought he played “very well for a lot of windy conditions.” Apart from the weather, Piazza says that there are some tough pins on the course but it is nothing that the boys can’t handle. Moving forward he does not plan on making any changes to his game, but will focus on staying patient.

Tomorrows round will make for an exciting competition after today’s change in standings. To find out more on results, tee times and pairings check out  the tournament site

The Investors Group Ontario Junior Boys’ Championship is open to male golfers 18 years of age and under, who have qualified through one of six qualifiers held across the province earlier this season. The Ontario Junior Boys’ Championship was first contested in 1923 at the Summit Golf & Country Club. Past winners of the event include Gerry Kesselring, Gary Cowan, Stu Hamilton, Mike Weir, Jon Mills and Albin Choi.