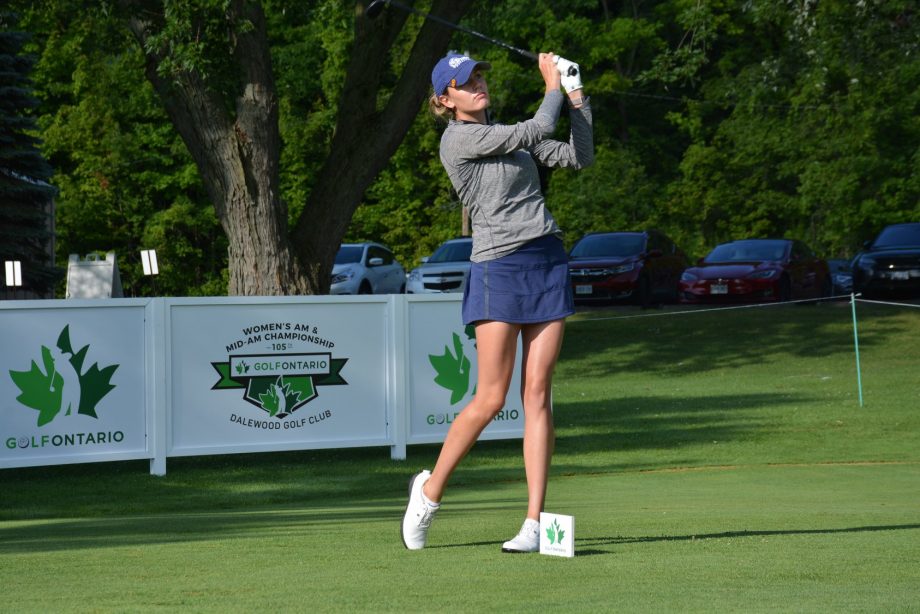 Dalewood, ON – The start of round two came with sunshine and clear skies at Dalewood Golf Club for the Ontario Women’s Amateur and Mid-Amateur Championship. Due to the severe weather delays experienced yesterday, eleven groups resumed round one at 8:00 a.m. and round two was pushed back an hour to an 8:30 a.m. start. As the day progressed, the wind increased and so did the scores.

With the Women’s Mid-Amateur Championship moving into tomorrow for their third and final round, leader of round two Nonie Marler, Public Player, completed her round with a notable four birdies and three bogeys (144). In a two way tie for second is 2017 champion Judith Kyrinis, (Granite GC), and Lindsey Hummel (St. Thomas G&CC). Following round three will be the awards ceremony for the Mid-Amateur division only.

Afterwards Maler, who also plays out of Marine Drive Golf Club in BC, had this to say about her round. “I feel like it was an improvement over yesterday, so I was pleased with that. I had a good game plan and committed to my shots more”. She added, “I had one practice round under my belt and having the first round with two rounds now, I felt like I knew the course a lot better today to be able to give myself the best opportunity possible and really capitalize on it”.

Climbing the leaderboard of the Women’s Amateur Championship is GO Public Player, Sydney Naro, with one under on the front and two over on the back, for an overall one over through 2 rounds (142). Following in second with four birdies for the day is first round leader Claire Hernandez (Thornhill Club). In third at three over, a six way tie to battle it out tomorrow; Brooke Rivers (Brampton GC), Sarah Beqaj (Toronto GC), Sarah-Eve Rheaume (Golf Quebec Club), Sadie Dewinton-Davies (Public Player), Nonie Marler (Public Player), and Vanessa Boroviols (Weston G&CC). This evening, Golf Ontario will cut the field down to 42 plus ties.

The third round will begin at 7:30 a.m. tomorrow. For future results and information on the championship, visit the official championship page here.