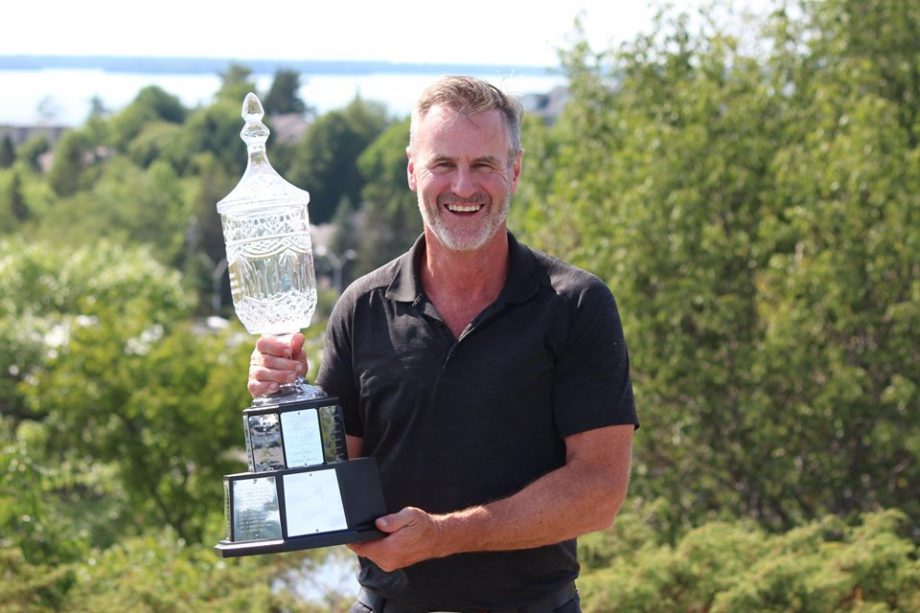 Gravenhurst, ON — It was a brisk and dewy morning that welcomed the players to Taboo Muskoka for the third and final exciting day of the 84th annual Ontario Senior Men’s Amateur Championship. As the weather began to warm up over the course of the day, so did the scores. The third round saw competitive play the whole way through with an impressive showcasing of skill from the entire field. Despite everyone having a strong round however, only one could be crowned a champion.

After three rounds of impressive play, it was David Greenaway (Barrie CC) who came out on top. Greenaway trailed Robert Gibson (Cedar Brae GC) by a single stroke heading into today but was able to ride early momentum throughout the round. Starting off on a high note, Greenaway birdied the first hole to tie things up from the get-go. Using this as a platform for success, the Barrie resident went bogeyless through the front nine, eventually stealing the lead from Gibson and entering the back nine up by a single stroke.

However the steady play wouldn’t last, and Greenaway would quickly find himself trailing yet again. Greenaway triple bogeyed 12 after a few tough shots from the rough, and Gibson retook the lead by three strokes. It seemed like Gibson would be able to ride through the last six holes with ease, but despite the unlucky bounces, Greenaway continued however to persevere and quickly birdied the next hole (Gibson bogeyed) to climb back within one. He birdied 14 and 16 as well, and the narrative quickly flipped.

It was now Greenaway’s tournament to lose as Gibson trailed by one, and Ashley Chinner (Coppinwood) trailed by two. He would finish his round with a birdie on 18, officially crowning himself the 84th Senior Men’s Amateur champion.

“It was such a great feeling to hit that last putt,” said Greenaway. “I knew I had a lot of ground to cover after 12, so it was rewarding to be able to pull back ahead. Rob and Ashley are fantastic players, but coming into today’s round I knew I could stick around with them.” Greenaway also explained that he credited his win today to the triple bogey he scored.

“If anything that triple bogey saved my round. If it weren’t for that, I wouldn’t have played as freely as I did,” he said. “I told myself that I needed to loosen up after that hole. I knew if I just went out there and had fun, I would have a much better round.”

It was a tough battle throughout, and up until the final hole it was still anyone’s game. Gibson had a steady round throughout. Scoring -1 (-1 total) on the day, it was very possible that Gibson was going to come out on top, but by the end of it all it wasn’t enough to top Greenaway’s total score of -2.

Placing in third, Chinner also had a fantastic round. Despite two tough holes where he would find himself trail further behind than he had wished, the veteran always climbed on back and made a good run.

Golf Ontario would like to thank the competitors, their families, and everyone who attended and supported this championship.  We would also like to thank Taboo Muskoka and their staff for their excellent course and hospitality in hosting this event.