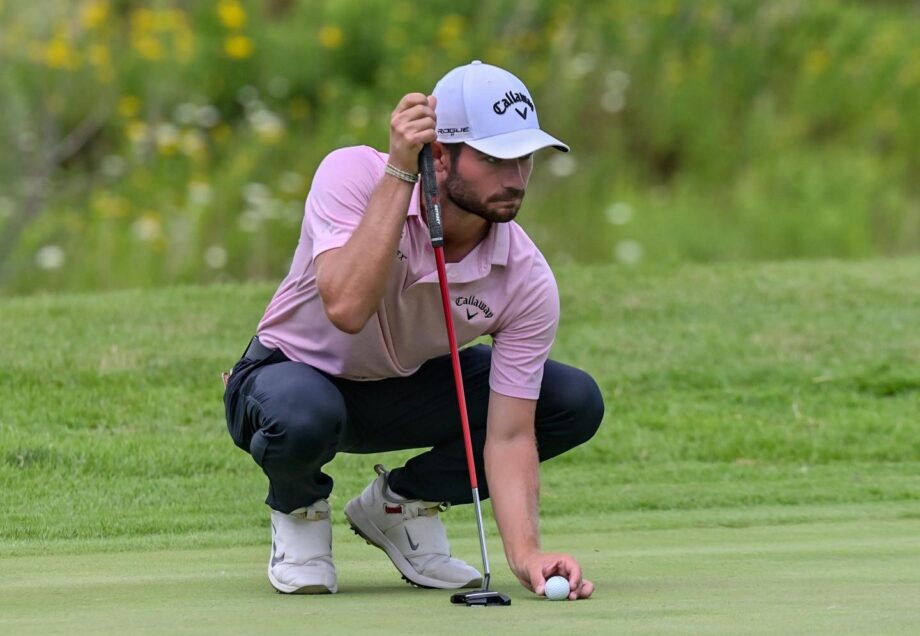 TOTTENHAM, Ontario—Noah Goodwin holds a one-stroke lead after the opening round of the Sotheby’s International Realty Canada Ontario Open. Goodwin shot a 7-under 64 that included two eagles on the back nine to pull ahead of the pack Thursday at the PGA TOUR Canada event. The sixth stop on the 2022 Tour is taking place at the Woodington Lake Golf Club’s Legends Course.

“I played great all the way around. I didn’t really make any big, glaring mistakes. And if I did, I was able to save par on most of them and then started rolling the putter really, really well,” said Goodwin, who added that the latter is something his game has been lacking. “So that was really nice to see, and I got a few really long ones for eagle to drop.”

The 22-year-old Texan, who played for Southern Methodist, had eagles on Nos. 12 and 17. He birdied four holes on the front nine and wound up with just one bogey on his round.

“It was just one of those days where everything went really, really well,” Goodwin said.

Germany’s Alexander Herrmann has sole possession of second place. He had nine birdies en route to a 6-under 65.

“There’s still room for improvement always,” Hermann said. “But then again, there were so many putts that went in that usually don’t drop. So, I’ll take it. I’m not complaining.”

Herrmann has had a quiet rookie PGA TOUR Canada season since capturing medalist honors at the first Qualifying Tournament in Weston, Florida, last February. Herrmann has made two cuts in four official starts, but his top performance is only a tie for 40th at the Prince Edward Island Open presented by IMP Solutions. Thursday, Herrmann, who still maintains a home in the Atlanta area after playing collegiately at Georgia State University, posted the 65, which is his low 18-hole score of the season. Herrmann’s previous-low round was a 3-under 67 (Royal Beach Victoria Open) and a 4-under 68 (Prince Edward Island Open).

Alex Fitzpatrick of England is tied with Canada’s Michael Blair for third, two shots off the lead at 5-under. Fitzpatrick’s round featured five birdies and an eagle. Blair recorded seven birdies. That included four in five holes early on.

“I just kept hitting it in makeable spots,” Blair said of his approach shots. “And that was the stretch where they went in.”

No one, however, got off to a stronger start than Parker Gillam. He had eagles on two of his first four holes. Gillam is coming off back-to-back top-10s, his most recent a tie for fifth last week at the Osprey Valley Open presented by Votorantim Cimentos – CBM Aggregates

Gillam finished the round at 4-under. He double-bogeyed the par-3 16th but bounced back with consecutive birdies to finish his day. He’s tied for fifth with Jared du Toit, Joseph Harrison, Jake Knapp, Dylan Meyer.

Did you know first-round leader Noah Goodwin has missed the cut at three PGA TOUR Canada stops this season (Victoria, Edmonton and Osprey Valley)? His only weekend of play resulted in a tie for 34th at the Prince Edward Island Open.

There are 42 Canadians in this week’s field. Michael Blair, of Hamilton, and Jared du Toit, of Calgary, are in the top five after the first round. Here’s a look at the 11 players who finished at even-par or better after the first 18 holes.

Noah Goodwin finished the 2022 college season ranked No. 12 in PGA TOUR University’s Velocity Global Rankings, earning him one of the 10 PGA TOUR Canada cards available to those finishing Nos. 6 through 15. The former SMU Mustang product leads the Sotheby’s International Realty Canada Ontario Open and is two shots ahead of Alex Fitzpatrick, who is tied for third. The Englishman finished sixth on the Velocity Global Rankings while playing for Wake Forest.

So far, not-so-good for first-round leaders on PGA TOUR Canada this season. Not one has gone on to win any of the four tournaments played thus far. Danny Walker is the only second-round leader to end up winning. He ultimately needed a playoff over Cooper Musselman to prevail in last week’s Osprey Valley Open. It was the Tour’s third playoff of the year.

Of this year’s winners, Wil Bateman has the lowest opening-round. Bateman fired a 6-under 65 in winning the ATB Classic. No player has shot an opening-round score in the 70s and won this year.

Homework, make that coursework, is paying off for Alexander Herrmann of Germany. After missing the cut last week, the former Georgia State standout is in second place following the first round. “It’s a good golf course. I mean, there are some challenging tee shots, and also the green complexes are tricky. So, scouting, that was definitely important. We went out there twice, which we usually don’t do,” Herrmann said. “We usually play one, maybe one-and-a-half practice rounds. But that definitely helped. Just overall it reminded me a lot of golf back home like in Germany. Some of the courses are fairly similar to what I see here. So maybe that was an advantage as well.”

It was a tale of two nines for Parker Coody. He started on Woodington Lake Golf Club’s back nine, beginning his day with a triple bogey on No. 10. He added two more bogeys and turned in 40. He fired a 30 on the front nine, racking up six birdies along the way. He parred the first, third and sixth holes. Coody finished with a 1under 70 for the round.

A look at how Monday’s tournament qualifiers fared in the first round: Etienne Brault (3-over), Riley Elmes (6over), Branson Ferrier (2-under), Kevin Gordon (3-over), James Hervol (6-over), Ryan Linton (8-over), Calvin Ross (10-over) and Mike Van Sickle (4-over). Peyton Callens, one of four amateurs in the tournament, was 1under. He’s the low amateur through 18 holes.

Canadian Cougar Collins had a couple of subpar rounds last weekend, at TPC Toronto, his home course in Caledon, a week ago. Collins bounced back this week, however, with a 68 Thursday—matching the success of his first two days at the Osprey Valley Open.

Tony Gil (Canada) and Motin Yeung (Hong Kong) withdrew from the tournament due to injury.

“I saw some putts roll in early and then was able to keep that momentum going. I love this course and everything about it.” — Noah Goodwin

“We’ll just regroup [Friday]. It’s going to be a different day, a different set of pins. And I’ll just go in with the same strategy that I used today, and we’ll go from there.” — Alex Herrmann

“The greens are pretty tough. They pinned it pretty hard, and there are a lot of weird slopes on them. You’ve got to be real careful.” — Parker Gillam

“The greens are really severe, and you have to be really precise to give yourself good putts. Hitting the green isn’t good enough out here. You’ve got to put it in the right spots.” — Jake Knapp

“I made some good putts and hit a lot of good shots, but it’s just the silly ones you kind of focus on after playing. If I can clean that up, then we’ll see.” — Joseph Harrison

“I can’t wait to get back at it and hopefully continue my play on [Friday].” — Michael Blair