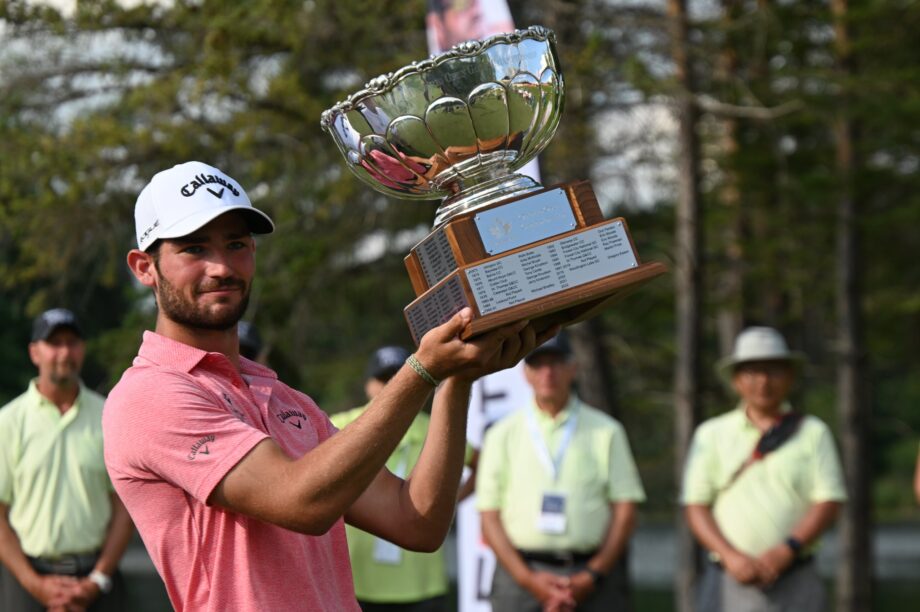 TOTTENHAM, Ontario—Noah Goodwin stood tall Sunday at the Sotheby’s International Realty Canada Ontario Open. Actually, he towered above the competition in all four rounds of the PGA TOUR Canada event to capture his first professional victory. The rookie did so in impressive fashion, finishing 17-under and winning by seven shots. He also jumped into the top five in the Fortinet Cup standings, improving 89 positions, into the No. 4 slot.

“It’s still sinking in right now. It was just kind of one of those days everything fell into place. I wouldn’t change anything about it,” Goodwin said. “The stars aligned for me this week.”

Goodwin’s margin of victory was the largest on the Canadian circuit since current PGA TOUR player Taylor Pendrith rolled to an eight-shot triumph over Kyle Mueller at the 2019 Quebec Open.

“I was just able to stay patient and give myself chances,” Goodwin said. “I wasn’t trying to force anything or get too fancy—just played some consistent golf.”

Diagnosed with a growth-hormone deficiency as a child, doctors told Goodwin he wouldn’t grow to be very big. That led to his focus on golf. The 22-year-old, 5-foot-9 155-pounder was more than big enough to post the wire-to-wire tournament title. The Texan topped the leaderboard all four days at the Woodington Lake Golf Club, becoming the first to do so on PGA TOUR Canada since Robby Shelton won the GolfBC Championship in 2017.

Goodwin’s final round featured highs and lows. Armed with a three-stroke lead when the day began, he birdied the first hole. Trouble, however, came shortly thereafter with bogeys on Nos. 5 and 6.

The response was swift and decisive. Goodwin turned things around with birdies on the next two holes and an eagle on No. 9. He moved to 17-under with a birdie on the 11th hole, extending his lead to seven.

“I was able to regroup. I came to terms with everything,” Goodwin said of his stumble midway through his opening nine. “I knew I had a game plan that was going to work, and it had been working. I just needed to kind of re-center myself with that.”

It more than sealed the deal. No serious challenges followed as he claimed the 500 Fortinet Cup points and the $36,000 paycheck. Goodwin moved to No. 4 in the Fortinet Cup standings.

Goodwin said it “was just a beautiful day out there.” Made even more memorable with his father carrying the bag.

“I wouldn’t be where I am without him,” noted Goodwin.

Lee Detmer, Cameron Sisk and Thomas Walsh tied for second, at 10-under.

“Overall it was a solid week. I have a lot to build off. Knowing I had a lot left in the tank is a really good sign,” Sisk said. “I struck it well, not as well as I can. I just didn’t make too many momentum putts that you need to make to put yourself in contention.”

Ian Holt, Trent Phillips and Danny Walker shared fifth place, at 9-under. Another group—Blake Hathcoat, Dylan Meyer and Easton Paxton—tied for eighth, at 8-under.

Did you know tournament champion Noah Goodwin just turned pro in June? The former Southern Methodist standout was 12th in the final PGA TOUR University Global Velocity Ranking to earn his playing privileges. As a hedge to that ranking, he played in the Qualifying Tournament in mid-April at The Wigwam in suburban Phoenix. There, he earned his playing privileges by tying for fifth and was also the low amateur that week.

How the Canadians fared

Brendan MacDougall of Hamilton, Ontario, topped nine others for the best finish for Canada among the 10 golfers who made the cut and played Saturday and Sunday. MacDougall tied for 11th.

Danny Walker’s tie for fifth was good enough to keep him atop the Fortinet Cup standings for a second consecutive week. The top five spots are held by this season’s tournament winners.

The last wire-to-wire PGA TOUR Canada winner was Robby Shelton at the 2017 GolfBC Championship in Kelowna, British Columbia. Shelton, a current Korn Ferry Tour member, opened with an 8-under 63 and followed with scores of 68-65-69 to lead after every round on his way to a one-stroke victory over Cody Blick, Johnny Ruiz and Adam Webb.

This week, Mike Van Sickle made his first PGA TOUR Canada start since 2016’s Niagara Championship, where he tied for 46th down the road in Fort Erie, Ontario. Van Sickle, a Monday qualifier, rebounded from an opening, 4-over 75 with scores of 67-70-66 over his final 54 holes. Van Sickle tied for 18th, a finish that earned him an invite to next week’s Quebec Open.

Sunday’s top climber was Ian Holt. He shot a 64 to move up 29 positions and into a tie for fifth at 9-under. Thomas Hutchison fired a 66 to rise 25 spots up the board. He finished 5-under and tied for 25th.

Mike Van Sickle (6-under) and Branson Ferrier (1-over) were the only Monday qualifiers to make the cut. Thus far, nine of 40 qualifiers have made it to the weekend this season.

Peyton Callens, the lone amateur to make the cut, finished at 2-over. The University of Nevada star, who is from Langton, Ontario, earned All-Mountain West Conference honors as a senior and still has a year of eligibility remaining.

“I finally just let myself kind of relax and trust in my game.” — Noah Goodwin

“Every shot coming down the stretch when you’re in contention is huge. Especially when it comes to money and the points.” — Cameron Sisk

“SMU. I’m so thankful for them. All my teammates and everybody who pushed me to be better and helped me along the way. They’re my closest friends or my brothers. I wouldn’t be here without them pretty much.” — Noah Goodwin on what his college experience meant to his career development

“That’s kind of what Sundays do to people. It’s a lot of pressure. Every stroke counts.” — Cameron Sisk

“Golf is hard. We’ve picked a crazy sport to play that isn’t the most rewarding most of the time.” — Noah Goodwin