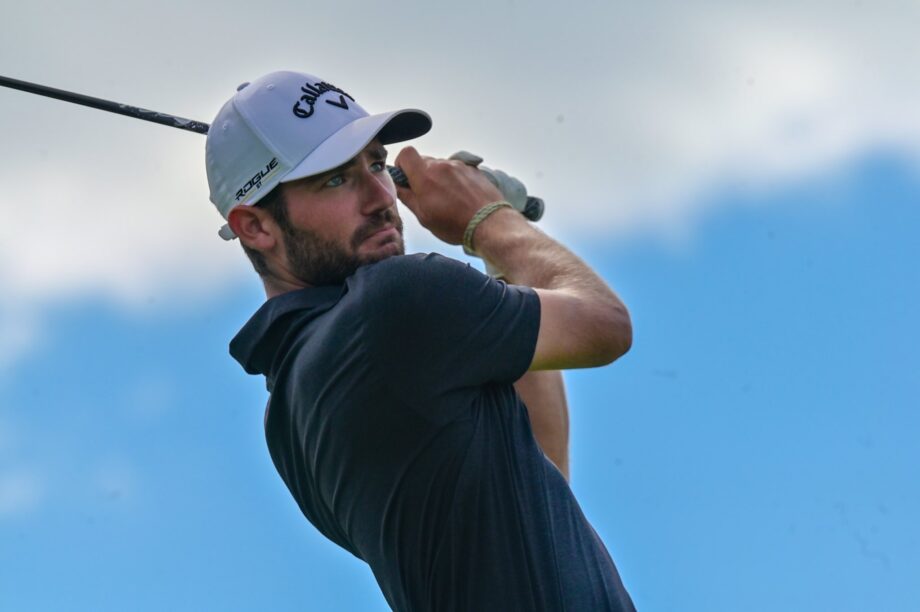 TOTTENHAM, Ontario—Just when it looked like things were tightening up at the Sotheby’s International Realty Canada Ontario Open, Noah Goodwin made an eagle to regain some separation. He leads Luke Schniederjans by three shots.

After having his lead cut to a single stroke, the 22-year-old Texan drained a 13-foot putt for a 3 on the par-5 17th hole to garner some breathing room in his bid to win the PGA TOUR Canada event at the Woodington Lake Golf Club. Should he do so, Goodwin would also become the season’s first tournament champion to hold leads after all four rounds. The PGA TOUR University alum out of Southern Methodist opened with a 64 and followed with two 68s.

Goodwin said he just kept giving himself opportunities in a round that included three birdies on the front nine and a double bogey on No. 10. He rectified the latter with his third eagle of the tournament.

Entering the day with a three-stroke lead, Goodwin was confident he knew what needed to be done.

“I played my game and kept it smart out there,” he explained. “(I) was just trying to stay patient.”

It’s all part of the game plan Goodwin has had this week. On Sunday, Goodwin can claim his first PGA TOUR Canada title.

As the closest contender, Schniederjans, a Georgia native, got off to a special start. He sunk a 70-footer for birdie on the first hole to set the tone for an 8-under 63 that lifted him into second place.

“It was a good round, and I’ll try to put up another good round [Sunday],” said Schniederjans, who had six birdies and an eagle in his bogey-free day.

Cameron Sisk (9-under) is all alone in third place. He’s one shot ahead of a fourth-place group that includes Canadian Jared du Toit and Americans Justin Doeden, Blake Dyer, Dylan Meyer and Jacob Solomon, all at 8-under.

“It was just a fantastic day. I was super dialed on ball striking,” said Solomon, who moved up 36 spots on the leaderboard Saturday with a 63 of his own. “I mean, this had to be one of the best ball-striking rounds I’ve ever played—just hitting fairways, hitting greens.”

Did you know Noah Goodwin has played on only one weekend prior to this one on PGA TOUR Canada? He tied for 34th at the Prince Edward Island Open after missing the cut in his other three starts.

How the Canadians fared

Jared du Toit (Calgary) leads the 10 Canadians who made the cut. Du Toit is 8-under after shooting a 67 Saturday and tied for fourth, five shots off the lead entering the final round.

Sunday, Noah Goodwin will attempt to become the first PGA TOUR University alum coming off the 2022 Global Velocity Rankings to win this season. He enters the final round with a three-stroke lead. Four times this season, PGA TOUR U. players have posted top-fives, led by Joe Highsmith and Trent Phillips. Highsmith lost in a playoff at the ATB Classic presented by Volvo Edmonton and added a tie for fourth at the Prince Edward Island Open presented by IMP Solutions. Phillips has a pair of ties for fourth, coming at the same tournaments—the ATB Classic and the Prince Edward Island Open. Here are the results of top-15 finishes by PGA TOUR U. players this season.

To show what a difficult-scoring day it was in Thursday’s first round, there were only 27 rounds in the 60s from the 152 players who completed 18 holes. Saturday, with the wind down and only 72 players remaining after the cut, 33 posted sub-70 scores.

Monday qualifiers Branson Ferrier (4-under, tied for 22nd) and Mike Van Sickle (1-under, tied for 41st) fired third-round scores of 73 and 70, respectively. Peyton Callens, the lone amateur left in the tournament, shot a 76 and is now even par and tied for 48th.

The biggest mover on the day was Trent Phillips (6-under). He improved 42 positions into a tie for 14th with a 7-under 64.

Charles Wang and Luke Schniederjans both made holes-in-one on No. 16 Saturday. There have now been six aces on the Tour this season. The other four came at the ATB Classic. John Duthie, J.T. Griffin, Josh Hart and Noah Woolsey all had holes-in-one on No. 13 at the Edmonton Petroleum Golf and Country Club.

Windy weather doesn’t seem to bother Alex Fitzpatrick of England. He’s used to it. “I don’t mind the wind at all,” he said while noting it suits his game well. “The more it blows, probably the more I enjoy it.” Fitzpatrick is 7-under and tied for ninth.

An impressive streak ended Saturday when Cooper Dossey shot a 4-over 75. The former Baylor Bear had a run of 18 consecutive rounds of par or better. Dossey was under par 15 times during the stretch.

“I love playing on the weekend. I love playing the twosomes. It’s just good vibes. Now that you’ve made the cut, it’s kind of stress-free. Let’s go try to win the golf tournament.” — Jacob Solomon

“The course is kind of interesting because it’s a lot of irons and 5-woods off the tee. But it challenges your iron play, and you’ve got to hit your irons good out here, which is fun.” — Luke Schniederjans

“I’m excited for a chance. Any time you put yourself in contention after three days you did a good job. You kind of get rewarded with some pressure [Sunday].” — Jared du Toit

“The lack of wind definitely allowed me to go at more pins, especially on the par-4s. But, really, it was just such a nice groove. I mean, ball-striking with my shorter and mid-irons is really good right now. So that’s where you have to be really good at to score around this place. So, if I keep doing that, and I’ll be in a good spot.” — Cameron Sisk

“I had an awful ball-striking week last week from the fairway. So I did some work when I got here, just some practice and found a drill that worked for me pretty well. So going into the week, I felt really confident, and it’s paid off.” — Cameron Sisk

“I think the most weird part is going from college to professional golf. In college, you have 54 guaranteed holes. You get out here and we’re sitting around the cut line and things get to be a little bit intense. I’m trying to be a little bit more comfortable when it comes to that and then being able to be aggressive and play free on the weekend. That’s definitely important.” — Cameron Sisk

“This is definitely a step in the right direction. There are a lot of good players out here. I can take this as a positive, and more weeks like this will help me.” — Cameron Sisk

Third-Round Weather: Mostly cloudy in the morning becoming sunny in the afternoon. High of 24. Wind W at 9-15 kph.