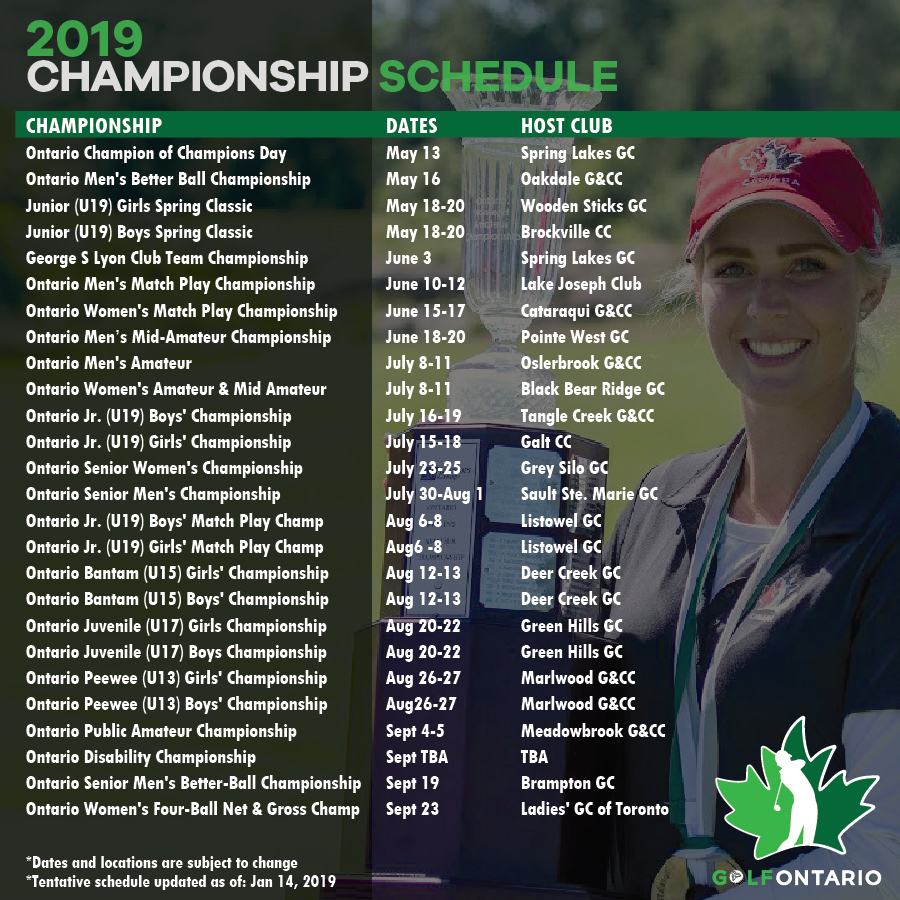 A return to the foothills of the beautiful Niagara Escarpment, a venture to the shores of Lake Superior, and a poised group of recertified rules referees under the new 2019 code has Golf Ontario proud to launch this year’s schedule.

The golf season is just around the corner and the planning is well under way as Golf Ontario heads into the 2019 season featuring 13 of the top 100 golf courses in Canada, a number of new venues, as well some longstanding partners and events to host the best players in the province. Registration will open January 31st at 9am.

To view a full list of all 2019 Golf Ontario championships and qualifiers see here.
(updated Feb 1, 2019)

“We’re proud and excited to offer a full championship schedule working with many of Ontario’s most renowned golf clubs,” said Golf Ontario Manager of Rules & Competitions John Lawrence. “Our 2019 venues are set to showcase an exciting season in communities across the province and we thank those clubs for hosting our events.”

The year will kick off highlighting Golf Ontario member club’s champions from across the province as they compete at Spring Lakes Golf Club once again for the Champion of Champions, May 13th. After what was a great success bringing all the divisions together for one-day, Golf Ontario is excited to build on an even greater event this year by inviting Ontario Jr. club champions to display their exceptional skills.

The Victoria Day long weekend Junior Spring Classic’s will kickoff the competitive championship season for most juniors. The boys will have a change of scenery as they move east to compete at Brockville Country Club while the girls will takeover Wooden Sticks Golf Course for the annual event.

An addition to June this season will be the Women’s Match Play Championship. The event will take place at Cataraqui Golf & Country Club in Kingston June 15-17, running in conjunction with the 70th annual Eastern Provinces Championship. Players competing for the Ontario Women’s Match Play will be required to register through Golf Ontario and qualify through the Saturday Field Day. The top 16 competitors will move on to the Match Play competition.

Once again, the schedule is highlighted by the Ontario Men’s and Women’s Amateur’s, both taking place July 8-11. The 97th Men’s Amateur will return to the foothills of the beautiful Niagara escarpment to take on Oslerbrook Golf & Country Club for the second time since 2013. Meanwhile the women will compete for the title at the beautiful parkland layout that is Black Bear Ridge Golf Course for the 104th edition of the Ontario Women’s Amateur.

This season both Senior championships will be played towards the end of July. The Senior Women’s Championship will move back to their traditional date along the banks of the Grand River as they contest the links of Grey Silo Golf Club July 23-25, while the men will travel north to the historic Sault Ste. Marie Golf Club as part of the clubs 100th anniversary celebrations July 30-Aug 1.

Team competitions begin with the Men’s Better Ball Championship at Toronto’s Oakdale Golf & Country Club on May 16 and the George S. Lyon Club Championship will go June 3rd at Spring Lakes Golf Club. We will close out the year as always with the Sr. Men’s Better Ball at Brampton September 19th and the Women’s Fourball will be welcomed by the Ladies Golf Club of Toronto on September 23rd.

The start of the season is less than four months away and 2019 should be another sensational golf season in Ontario.

To view a full list of all 2019 Golf Ontario championships and qualifiers see here.
(updated Feb 1, 2019)