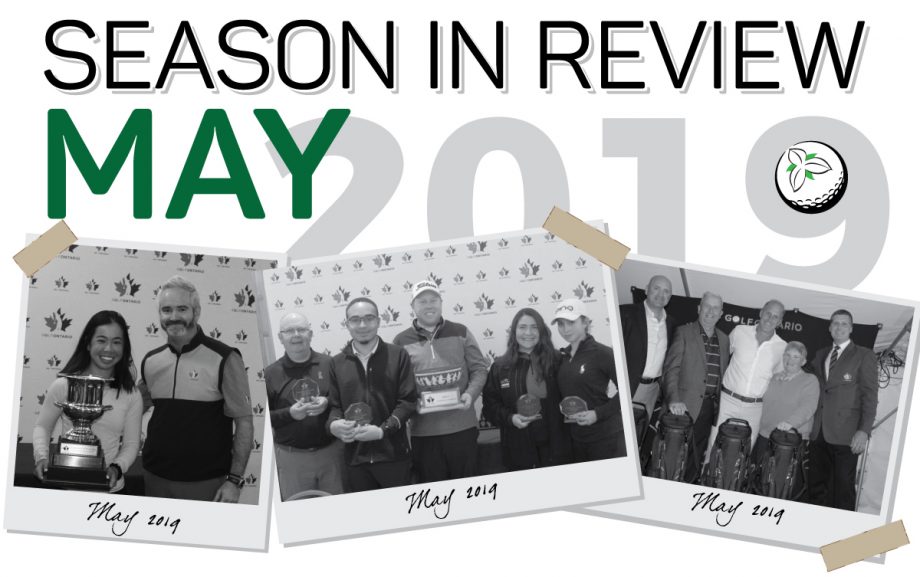 Uxbridge, ON — With the leaves changing colors and falling, brisk chilly winds swirling and Halloween just around the corner, it’s hard to believe that the golf season just kicked off a few months ago. And what a season it has been! From tournaments like the Champion of Champions to the return of the Ontario Open and the introduction of the Disability Golf Championship, it has been an exciting few months of golf. Please join us as Golf Ontario looks back each week on all the incredible shots, champions crowned, and exciting times over the course of this past summer. This week we are kicking the 2019 season recap from the month of May.

Golf Ontario kicked off the 2019 golf season on May 14th with the annual Champion of Champions Tournament at Spring Lakes Golf Club. It was a cold and cloudy day, but it didn’t keep the 200-plus club champions’ smiles from lighting up the course.

Similar to previous years, the tournament saw incredible competition with two divisions being decided in a playoff, and the other four all falling within a 3 shot differential for the lead.

In the Women’s category, Crystina Kertsos from York Downs Golf and Country Club held the lead shooting +2 (73), and in the Senior Women’s it was Sue Postian from Sunningdale Golf Club who shot +9 (80) to take first.

The Junior Girls was also a close race, but it was Ava Koukofikas from Cedar Brae Golf Club who finished +7 (78) with some stellar shooting to take home the top spot.  Michael Ikejiani, from Barrie Country Club led the charge in the Junior Boys division, shooting -3 (68). Ikejiani had the most commanding lead in the entire tournament, beating out Ryan McAskill from The Club at North Halton by three strokes.

The Senior Men’s division was a dog race and by the end, it had to go to a playoff. Allen Chapman from Lindsay Golf and Country Club, and Lars Melander from Hidden Lake Golf Club both ended the tournament with final scores of +1 (73). Melander would end up taking first place in the playoff, beating Chapman one on one. The Men’s division was also a very tight race, ending in yet another playoff between Chris Feenstra from Sunningdale Golf Club, and Zack Mason from Donalda Club, who both shot -1 (71). Feenstra took home the hardware with a nice putt, and solidified his place at the top spot.

Continuing the quick start to the golf season, just two days later on May 16th, the Ontario Men’s Better-Ball Championship was held at Oakdale Golf and Country Club. The 61st running of the event was again well contested with 54 teams looking to emerge victoriously.

At the end of 18, Garrett Rank from Westmount Golf and Country Club, and Mike Roberts from Whistle Bear Golf Club had carded a seven-under (65) to lead the charge and take home the championship. The tournament proved to be competitive, with only a two-shot difference separating the first-place duo, and a five-way tie for fifth.

On May 18th-20th the Junior Spring Classic Championship took place at Brockville CC and Wooden Sticks GC, where some of the best junior players from Ontario and Quebec competed for the chance to win their first championship of the season.

Some hot play and impressive shots were showcased over the course of the three days, but after the final rounds, it was Thomas Stafford (Golf Quebec) who captured the boys’ title and Jasmine Ly (Kingsville Golf & Country Club) who battled through the tough conditions and took home the girls’ title. Both displayed perseverance and skill over the three days, allowing them to kick off the 2019 season as champions.

During the month of May, Golf Ontario also hosted their 2019 Golf Hall of Fame Induction Ceremony and their 8th annual Junior Golf Drive and Gala. The Hall of Fame Ceremony saw the induction of three deserving inductees entered into the Hall and one member of the Ontario golf media honoured with the Lorne Rubenstein Media Award.

Presented by TSN reporter and golf analyst Bob Weeks, the recipients; Deborah Lee Eldridge, Judith Kyrinis, and Richard Scott, all became the newest members of the Hall at the official induction ceremony, and in addition, Scott Metcalfe received the Lorne Rubenstein Media Award.

Presented by Cheerios, the 2019 Junior Golf Drive and Gala was a huge success, raising over $101,000 for junior golf programs. The sold-out day began with lunch and drinks, followed by 30 foursomes hitting the beautifully conditioned Granite Golf Club under perfect weather conditions. Following golf, attendees were treated to a gala event at the Granite Golf Club clubhouse. This included a cocktail reception with some memorable silent auction items, and was followed by a delicious dinner, a guest appearance by special guest Garrett Rank, and world-class entertainment from ex PGA Tour player Charlie Rymer.

All in all, May was an exciting month to start the 2019 season off right! Next Wednesday we’ll be looking back on the month of June, when some of Golf Ontario’s biggest championships were held. Make sure to check it out!