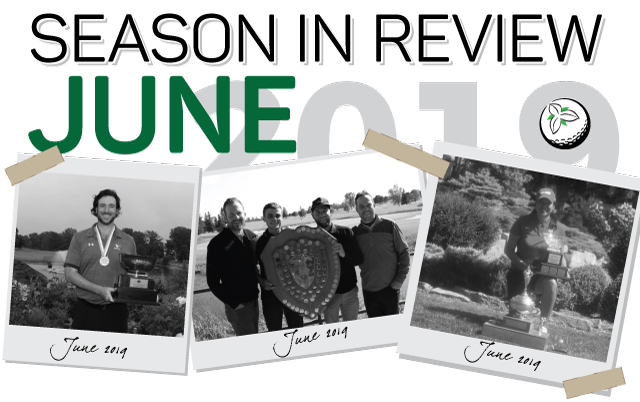 With snow in our forecast this week, let’s remember sunnier days and look back at the month of June in the second installment of our 2019 Golf Ontario Season Review. The summer schedule started to kick into full gear as we had events including the George S. Lyon Team Championship, various Match Play competitions and concluding with the Men’s-Mid-Am Championship. Let’s have a look back at a packed month of June golf.

Kicking things off in June was the 86th annual George S. Lyon Club Team Championship held at Spring Lakes Golf Club on June 3rd. In the face of less than perfect weather, Burlington G&CC, and Deer Ridge GC ended up tied on top of the 23 team event at the end of regulation play.

Tying +18 (306) after the initial 18 holes, the two teams headed out to decide things in a playoff. Both Eric Ross (Burlington) and Pete McMenemy (Deer Ridge) went out to the 18th hole to represent their respective teams, and it was Ross who came up on top by a single stroke. After a clean drive to the fairway and a near-perfect shot onto the green, Ross held the edge the entire way. Ross’ four-foot putt was the final shot of the day, locking Burlington as the champions.

June 10-14 saw the Ontario Men’s Match Play Championship from The Lake Joseph Club in Port Sandfield, Ontario. On a cold and rainy day, Delhi G&CC member Peyton Callens would outlast the field of 64 competitors to earn his first title.

The final pairing of Callens and Aiden Gavey (Beverley G&CC) were welcomed to the fourth day of the tournament by undesirable weather. Our final match saw Gavey take an early lead, while Callens bogeyed the first two holes. Gavey held onto this lead with some steady putting through the first 5 holes, but Callens made a comeback eventually taking the lead on the seventh. Callens held the 1up lead until the 18th hole, where Gavey hit a long putt and pushing the finals to a playoff.

After extra holes were all said and done, it was Callens who pulled ahead. Callens hit a drive that landed perfectly in the middle of the fairway ahead of Gavey. With a slight advantage, he never looked back. Dropping his third shot for birdie, Callens looked up to the cloudy skies in celebration as the 2019 Men’s Match Play Champion.

Cataraqui G&CC welcomed us for two days of the annual and historic Golf Ontario Women’s Match Play Championship from June 16-18. 16 golfers began the day Sunday with high hopes, but after two rounds the final 4 players were paired up on a Monday morning to make up the semi-finals.

The first semi-final of the day saw Brooke Rivers (Brampton GC) square off against Haley Yerxa (Public Player) at 8am and saw both women playing fantastic golf. Rivers, however, made brilliant shots and found herself up most of the match. Yerxa would battle back late to try and hang on but Rivers would take it 3&2 to advance.

The second second semi-final consisted of Tiana Cruz (Ladies GC of Toronto) and home-course golfer Patricia Hogeboom (Cataraqui G&CC). The two of them battled hard back and forth and it was Cruz who would take over on the back nine and take the match 2&1

The exciting finals match pitted Rivers and Cruz against one another after about a 40-minute break.  Rivers would take the lead and run with it, not relinquishing it until the 14th hole. Cruz finally tied the round back up and from then only got stronger and would hold on to the lead and eventually take the match 2&1. Cruz was extremely excited to see some past champion names on the trophy, including 2011 Champion Brooke Henderson.

Finally the Ontario Men’s Mid-Am Championship took place June 18-20 from the beautiful and challenging Pointe West Golf Club. After three hard fought rounds, it was Charles Fitzsimmons (Thornhill Club), fresh off his recent Canadian University Championship win, who sat at the top of the leaderboard with a final tournament score of -6. The entire third round was actually a very tight race between Fitzsimmons and Philip Arci (King’s Riding GC).

Fitzsimmons, on his final round would perhaps make the shot of the tournament on the par 3 17th. After hitting his tee shot into the bunker, he walked up to the ball and proceeded to blast it out of the sand into the hole for a clutch birdie that pulled him into the lead for good.

June was clearly a fantastic month of shot-making, competition, determination, and perseverance of Ontario golfers. Please join us again next Wednesday as we review an amazing packed July calendar of events and competitions.