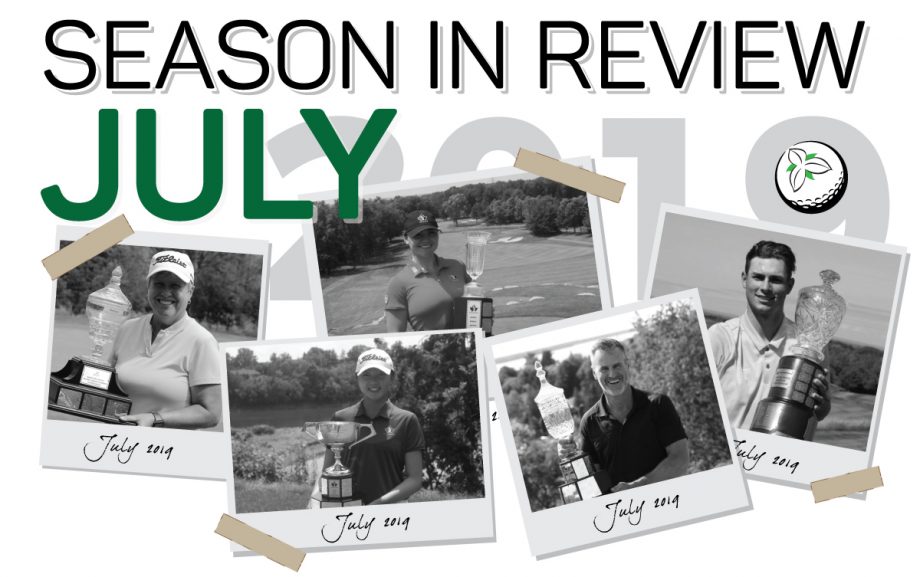 Uxbridge, ON — With the snow now covering most of our beautiful Ontario courses, join us in looking back at the warmer month of July, as both the weather and golf heated up. A busy July saw some of our biggest tournaments of the season, including the Men’s-Am, Women’s-Am and Women’s Mid-Am, both Senior-Am’s and our always highly coveted Junior Girl’s and Boy’s Championships. Let’s dive in and recap a scorching July of Golf in Ontario.

The busy month kicked off with the 104th annual Ontario Women’s Amateur and Mid-Amateur Championships from July 8-11 at Black Bear Ridge Golf Course.

Hailey McLaughlin (Granite GC)  took the lead after day one for the Amateur Championship and on the Mid-Amateur side, Sarah Dunning (Westmount G&CC)  took a lead of her own.

Brigitte Thibault, a member of Team Canada’s National Amateur Squad, caught fire under the scorching sun in round two of the Women’s-Am, shooting an excellent -5 (67) on the strength of 7 birdies and 2 bogeys. Mary Ann Hayward, an Ontario and Quebec Golf Hall of Famer, shot a brilliant 2 under to take the lead in the Mid-Am Championship after two rounds.

The third day of action would be the final round for The Mid-Amateur category and did not disappoint for excitement. Dunning would come from behind and then overcome the see-saw battle with Hayward (St. Thomas Golf & Country Club) to claim the Mid-Amateur Championship.

Thibault hung on to lead the way again and would carry the lead into the fourth and final round of the Women’s-Am portion. The final day would produce both an amazing comeback attempt from Emily Zhu (Team Canada National Junior Squad Member) and also an excellent display of toughness from Thibault. This toughness allowed Thibault, who had been the leader after days two and three, to claim the title. A thrilled Thibault spoke of her win after the round. “It’s obviously an honour, I love to see the previous winners that have all took this kind of step to where they are now. I see a lot of names from Team Canada and excited to see where this could take me.”

Meanwhile, the 97th annual Ontario Men’s Amateur Championship got underway from Oslerbrook G&CC. The first day proved to be very competitive, with three players tying for the top spot after a well-played first round. Ty Celone (Public Player), Charles Fitzsimmons (Thornhill Club), and Noah Steele (Cataraqui G&CC) all came out ahead with scores of two-under (69).

Day two proved to be extremely competitive with multiple lead changes throughout but it was Matthew Anderson (Credit Valley G&CC) and Fitzsimmons who came out on top to take the lead heading into the third day. Finishing with total scores of 4-under (138), the two were lights out throughout the entire round.

After three rounds, it was Fitzsimmons who came out leading the pack going into the fourth and final day. It was a back and forth affair between Fitzsimmons and Anderson, his former Team Ontario student, the entire round. The two entered the third day tied at 4-under and refused to solidify a leader until the very last hole of the day.

Windy conditions ushered in day four for the competitive field, but it was Anderson who came out on top to win it all. Trailing by one heading in, Anderson played with composure not many 19-year-olds have. After clinching on the 18th with a tap-in, the former Team Ontario student bent over the hole to pick up his ball as the crowd cheered on the new champion. Fitzsimmons high fived him and congratulated him on his achievement. “Maybe I taught you too well,” he joked. Anderson finished the tournament with a total score of 6-under (278), only one stroke ahead of Fitzsimmons.

The Ontario Junior Girls Championship got underway July 15-18 from Galt Country Club featuring the best female junior golfers in Ontario. The weather didn’t take long to warm up and neither did Sarah Beqaj (Toronto Golf Club). Beqaj, a National Junior Squad member, was lights out firing a -6 (66), firing a bogey-free, 4 birdie, 1 eagle round.

Second-round action saw the weather turn windy and rainy causing higher scores than the opening round. The weather may have changed but the leader after both rounds did not. Beqaj didn’t score as well as her course record in round one but did play well enough with a +4 (76) to hang onto the lead. Chasing down Beqaj were three members of Team Ontario sitting in second, third and fourth place. Ashley Chow (The Lake Joseph Club), Victoria Zheng (Granite GC) and Alexis McMurray (Glen Abbey GC).

Mother Nature tried hard to wreck the third round with an early four and a half-hour weather delay. Once the rain eased up, the sun and smoldering humidity took over for the afternoon making it a challenge for the field. Chow, hung in there through it all and after birdies on 15 and 17, found herself the leader after three rounds with an even-par (72) scorecard.

An exciting final round wrapped up under humid conditions and would come down to the very last hole to determine the 2019 champion. Zheng needed a birdie on the 18th to claim the title. In front of a sizeable crowd, she putted from just off the green to within a foot of the hole for the tap in birdie, and the victory. The birdie and a round of -3 (69) were all Zheng needed to beat Taylor Kehoe (West Haven G&CC), who once again turned in a stellar round firing a -4 (68) to almost catch Zheng from behind. Kehoe shot an impressive 69, 68 over the final two days of competition. Tying for second place with Kehoe, also one stroke off the lead was third-round leader Chow.

156 players took to the beautiful Tangle Creek G&CC, July 16-19 for the Ontario Junior Boys Championship. The first day was overly competitive, with no clear leader until the last hole few holes. After 18, it was Noah Campbell (Coppinwood GC) who was able to take the lead heading into the second round. Campbell had an impressive showing with a final score of two-under (70) after a stretch of five birdies in six holes midway through his round.

Day two saw Team Ontario’s Robbie Latter (Credit Valley G&CC) come on strong to claim the top spot. Latter finished the day with a total score of -5 (139), after an impressive second round which consisted of four birdies and no bogeys.

Round three proved to be just as hot, however, with more under-par scores seen throughout the day than any other day in the tournament. Some great play was seen across the field, but it was Team Ontario’s Latter who once again came out on top. The 18-year-old carded three birdies in four holes shortly after, and then knocked down two more birdies and a ton of pars on his back nine to keep his lead from the players trailing.

After an impressive final round, it was Ashton McCulloch (Cataraqui G&CC) who stole the show with a total score of -7. McCulloch entered the day trailing Latter, but took off hot and was able to steal the lead early. The 16-year-old (turning 17 tomorrow) notched four birdies on his front nine, and played steady the rest of the way through. Despite having two veteran Team Ontario members hot on his heels, McCulloch was able to keep his composure and retake the lead with a few par shots while both Latter and Dylan Henderson (Westmount G&CC) bogeyed the following difficult holes.

“I hadn’t even realized I’d won after I made the putt,” said McCulloch. “I was just in shock that it actually went in, nothing else even mattered at that moment.”

Grey Silo Golf Course welcomed our golfers for the 58th annual Ontario Senior Women’s Amateur Championship July 23-25. Entering the day, all eyes were on Judith Kyrinis (Granite GC) as she embarked on her journey of winning her fourth championship in a row. After 18 holes, it seemed like there was no slow in her step. Kyrinis finished her first round with a score of even-par (71), tying another Senior Women’s celebrity Mary Ann Hayward (St. Thomas G&CC) as the two past champions both had impressive showings.

Much like the first, day two proved to be very competitive with impressive play from the entire field. Hayward, a four-time champion had an impressive showing, finishing with a total score of -3 after two rounds. With only two bogeys on the day and five birdies, Hayward had a statement round showing the rest of the field that she means business.

With yet another impressive showing in the final round, it was Hayward who came out on top to be crowned the 2019 champion. The now five-time champ delivered some stellar play throughout the entire week, and due to an incredible second round, she gave herself the option to play a slow and steady final round to hold her existing lead. Despite a close battle with Kyrinis, the now five-time champ took her game to another level. Hayward ended her round with one more birdie on 18, and immediately received a round of applause and cheers from the crowd.

From there we would end a packed July with the 84th annual Senior Men’s Amateur Championship at Taboo Muskoka July 30-Aug 1.

The tournament saw a hot start from the entire field, but after the first 18, it was Ashley Chinner (Coppinwood GC) who came out on top. With a round one score of -2 (69), the Brooklin resident had an impressive showing that would give him the advantage heading into round two. Going bogey-less until the twelfth hole, Chinner had the most consistent round of the day. His steady shooting allowed him to find three birdies and fourteen pars, the most of any player throughout the day.

After a competitive second round, it was Robert Gibson (Cedar Brae GC) who pulled ahead going into the final day. Sitting in a tie for third entering the day, Gibson had an impressive showing in the second round with a score of -1, for a total score of even-par. Being the only player in today’s round to shoot below par, Gibson showed resilience when it mattered most. After every bogey the Cedar Brae member carded, he made sure to come right back with another birdie. Trailing in second by only a single stroke was Chinner and David Greenaway (Barrie CC) with scores of +1.

An exciting final round saw competitive play the whole way through with an impressive showcasing of skill from the entire field with Greenaway coming out on top. Greenaway was able to ride some early momentum throughout his final round. Starting off on a high note, Greenaway birdied the first hole to tie things up from the get-go. Using this as a platform for success, the Barrie resident went bogey-less through the front nine, eventually stealing the lead from Gibson. After some back and forth on the back nine, he would finish his round with a birdie on 18, officially crowning himself the 84th Senior Men’s Amateur champion.

July proved to be another majestic month of top quality Champions and Championships.  The drama was unparalleled and made for some incredible tournaments filled with record-setting rounds and breathtaking shots. Please check in again next Wednesday as we continue our 2019 Season in review with a look back at a thrilling August.