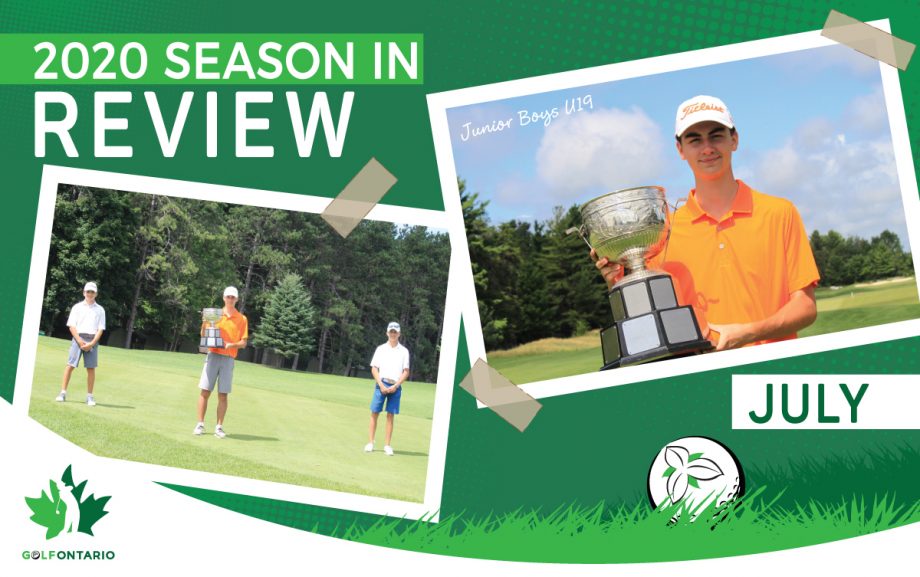 Uxbridge, ON – As the leaves change colour and the wind gets colder, Golf Ontario would like to start to take some time to reflect on the unique 2020 Championship season. Back in the spring, with early uncertainty around COVID, we were worried that the championship season might not make an appearance until 2021. With help of our amazing staff, players, and volunteers though,  we were able to make a condensed season possible. During these challenging times thanks to COVID-19, we were pleased to see all players, staff, and volunteers respecting the protocols set in place to keep everyone safe while competing.

In the end, the condensed season contained nine championships, each with a reduced amount of players to respect the restrictions set in place.

Please join us as Golf Ontario reflects on some amazing shots, successful championships, and the crowned champions this past summer. This week, we are teeing off with the 2020 season recap for the month of July.

With COVID-19 driving a slice into the early part of the 2020 season, Golf Ontario was excited to finally get underway with our first of nine Golf Ontario provincial championships. Teeing off the season, we welcomed the Ontario Junior (U19) Boys’ Championship to Saugeen Golf Club from July 27th to 30th.

Leading the pack for the first half of the day in round one, Nolan Piazza (Cherry Hill Club) completed the front in three under and was even par on the back. Playing strong with a later tee time, Yuqi Liu (The Country Club – West), took the lead with two-under on the front and back. Results from round one showed Yuqi Liu leading at four-under, and Nolan Piazza and Ashton McCulloch (Cataraqui G&CC) tying for second at three-under.

Heading into round two, the Junior (U19) Boys’ saw a switch in leaders, as Nolan Piazza (Cherry Hill Club) overtook round one leader Yuqi Liu (The Country Club – West). Piazza completed his front nine two-under and then went one-under on the back, to finish off round two with a 69 (138). As for the Juvenile (U17) Boys’, Ben MacLean (St. Catharines G&CC) fell to second on the leaderboard with three over on the front and one under on the back, finishing with 74 (144). Taking the lead was Ty Stansfield (Thornhill Club), with an even par on the front and an impressive four under on the back for a 4-under 68 (142).

As the competition thickened in round three, Junior Boys’ Nolan Piazza (Cherry Hill Club) and Yuqi Liu (The Country Club – West) finished the day with an overall eight under (208). Sitting in third was Ty Stansfield, who would be playing in the final group with Piazza and Liu for round four. With an impressive showing on the front, Juvenile player Ty Stansfield (Thornhill Club) started the day with four straight birdies, enroute to a one-under 71 to keep him atop the Juvenile leaderboard (213).

View the leaderboard from the Ontario Juvenile (U17) and Junior (U19) Boys’ Championship at Saugeen Golf Club, here.

Photos from the Ontario Junior (U19) Boys’ Championship can be found here: round one, round two, round three, round four.

In July, Golf Ontario announced the addition of Durham Artificial Grass to their family of partners to help continue to bring more value to the Association and its’ members. As part of this partnership and the NEW 2020 Golf Ontario Championship calendar, Durham Artificial Grass was slated to present the Ontario Senior Men’s and Women’s Championships, to be held September 8th to 10th at Taboo Muskoka Resort and Golf. Read more about the partnership, here.

For the 2020 Championship season, Golf Ontario also introduced a FrontLine Workers donation program as part of the registration process, to give back to the local communities we played in. At each championship, donations were given to local hospital foundations, with the Ontario Junior (U19) Boys’ Championship donating to the Saugeen Memorial Hospital Foundation.

With only one championship during the month of July, please stay tuned for recaps of the rest of our championships in the coming weeks. Next Thursday, we will be looking back on the month of August, when some of Golf Ontario’s biggest championship were held. Make sure to check back on Thursday!