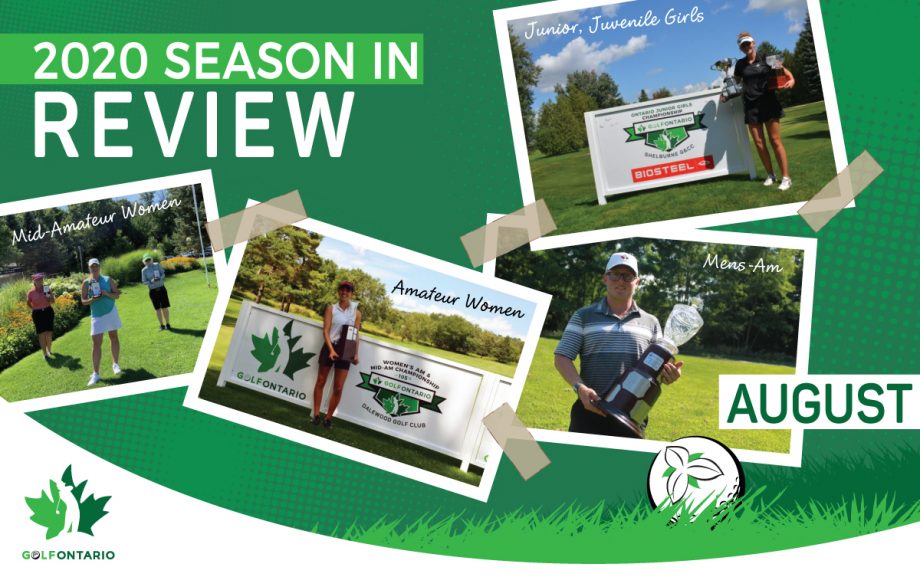 Teeing off the start of August, Golf Ontario welcomed the Ontario Women’s Amateur and Mid-Amateur Championship to Dalewood Golf Club from August 4th to 7th. Following a 3.5-hour weather delay in round one, the Amateur leader was Claire Hernandez (Thornhill Club) sitting at two-under including four birdies on her round. Hall of Famer, Judith Kyrinis (Granite GC), lead in the Mid-Amateur category after a one-over round with much golf still left to play.

The start of round two came with sunshine and clear skies, but as the day progressed, the wind increased and so did the scores. With the Women’s Mid-Amateur Championship moving into their final round the next day, leader of round two Nonie Marler (Public Player), completed her round with a notable four birdies and three bogeys (144). Climbing the leaderboard of the Women’s Amateur Championship was G.O. Public Player, Sydney Naro. Naro shot a one-under on the front and two-over on the back, for an overall one-over through 2 rounds (142). Following in second with four birdies for the day, was first round leader Claire Hernandez (Thornhill Club).

With the third and final round coming to an end for the Ontario Women’s Mid-Amateur Championship at Dalewood Golf Club, Public Player Nonie Marler (Marine Drive GC) took home the prestigious title with three near flawless rounds and a three day total of 218. Climbing the leaderboard in the final round, Terrill Samuel (Weston G&CC), played her best round of the championship finishing with a one-under par 71 (222). Falling to third, 2017 Ontario Women’s Mid-Amateur Champion Judith Kyrinis (Granite GC), completed the day with a tough 76 (224).

With one more round to go for the Ontario Women’s Amateur Championship, sitting atop the leaderboard was Michigan State University golfer, Sydney Naro (Public Player), with consistent play over the three rounds (214).

Lots of sunshine, smiles, and great play were found on the course today for the final round. Sealing the deal with four consistent rounds of golf, Michigan State University golfer, Sydney Naro (Public Player), brought home the Ontario Women’s Amateur crown with an even par round to end the championship at even overall (285). In a great fight for the silver and bronze, Brooke Rivers (Brampton GC) and Kristen Giles (Eagle River GC), went stroke for stroke most of the round with Rivers prevailing to finish second, one stroke behind Naro. Giles finished 2 shots off the pace for her third-place finish. With three late birdies down the stretch, Rivers really put pressure on Naro to hang on to the lead. Giles also had a birdie streak of her own down the back nine, but just like Rivers, couldn’t quite catch the leader.

View the leaderboard from the Ontario Women’s Amateur and Mid-Amateur Championship at Dalewood Golf Club, here.

Heading into our third of nine championships, Golf Ontario was thrilled to welcome the Ontario Men’s Amateur Championship to Otter Creek Golf Club from August 11th to 14th. Living up to expectations, the first round proved to be very competitive, with eleven players within three strokes of the lead.

Leading the pack, however, after day one was David Lang (Donalda Club) who fired a solid one-under to take a one stroke lead into round two. Dave Bunker (Cherry Hill Club), Kyle Chung (Brampton GC), Thomas Code (Highland CC), Jonathan Cranton (Donalda Club), Nathan Kraynyk (Eagles Nest GC) and Arnold Johnson (Public Player) all sit tied in second place, one shot back after each scoring a solid even-par round.

A cool, calm morning kicked off round two, with Robbie Latter (Credit Valley G&CC) taking the lead after a stellar bogey free round and a strong four-under, including 4 birdies. Latter would now sit at two-under overall after two days, for a 2-shot lead. Charles Fitzsimmons (Thornhill Club) and local favorite Peyton Callens (Otter Creek GC) both fired solid three-under pars, to follow closely behind at even par total after two rounds.

Round three brought a beautiful and calm morning as players looked to make some noise on moving day. Remaining the Championship leader was Robbie Latter (Credit Valley G&CC), who fired a stellar three-under (69) round including five birdies and an eagle, to now sit five-under overall after three days. Hot on his heels however was Cougar Collins (TPC at Osprey Valley), who fired the competitions best round of six-under (66) so far through three days. Collins sat two-under on the tournament and in second place after setting the pace with an eagle on the third hole.

It was a very competitive field throughout the entire week, and the final round was no different with the Championship coming down to the last few windy holes to determine the 2020 champion. Clawing his way to victory down the final stretch was Golf Canada Amateur Squad Member, Cougar Collins, with an even par round (72) to finish the Championship at two-under. He got some help from second and third round leader, Robbie Latter (Credit Valley G&CC), who stumbled just slightly down the back stretch and lost the lead after a double bogey on 13. Latter impressively fought back to remain tied with Collins until the seventeenth, where he would drop a shot once again. Latter finished at five-over (77) on the day, and a bogey on the 18th would help secure Collins the victory. Tied for second with Latter was Thomas Giroux (North Club of Halton), who finished the day and the week with a solid even par.

For the halfway point of our 2020 championship season, and teeing off from August 18th to 21st at Shelburne Golf and Country Club, we welcomed the Ontario Junior (U19) Girls’ Championship. Ominous grey clouds and windy conditions greeted the first round of competition. The strong field was not only currently being led by three Team Ontario members, but by three Juvenile (U17) Girls’. Taking the lead in round one, Nicole Gal (Oakville GC) had a solid start with five birdies, leaving her sitting two-under par. Tied for second, Sarah Gallagher (Blue Springs GC) and Katie Cranston (Oakville GC) headed into round two sitting one shot back.

Dealing with better conditions in round two, the players battled for a spot in the top 42 plus ties before the cut heading into round three. With lots of movement on the leaderboard, Katie Cranston (Oakville GC) and Nicole Gal (Oakville GC) switched positions, with Cranston taking the lead and Gal dropping to second. Cranston shot an impressive round of 68 with five birdies (139), while Gal’s two birdies helped to leave her three-under par for the round.

Round three presented the players with more windy conditions, as everyone looked to make some moves. Unaffected by the wind, Katie Cranston (Oakville GC) completed a solid round while remaining at the top of the leaderboard with an overall score of eight-under par (208). Sitting in second is the round one leader, Nicole Gal (Oakville GC), after a plus three round thanks to some tougher greens.

With the weather on everyone’s side today, the players looked to finish their final round on a high note and take advantage of the sun and the calm winds. Heading home with very full hands, the 2020 Ontario Juvenile and Junior Girls’ Champion is Team Ontario member Katie Cranston (Oakville GC). Cranston carded a two-over 74 on the final day, to finish a stellar week of golf at six-under par 282, for an impressive 4 stroke victory. A strong group of Juvenile (U17) players dominated the (U19) leaderboard this week, as Nicole Gal (Oakville GC) walks away with the silver after a final round 70 to finish the week at two-under (286). Jillian A Friyia (Highland CC) and Rozlyn Rooke (Blue Springs GC) shared the bronze in a three-way tie (289) with Junior (U19) player, Raesa Sheikh (TPC at Osprey Valley).

View the leaderboard from the Ontario Junior (U19) Girls’ Championship at Shelburne Golf and Country Club, here.

What an exciting and incredibly busy month August was! Before we say goodbye to our 2020 season, join us next Thursday when we will be looking back on the month of September. See you for more from #ThrowbackThursday next week!