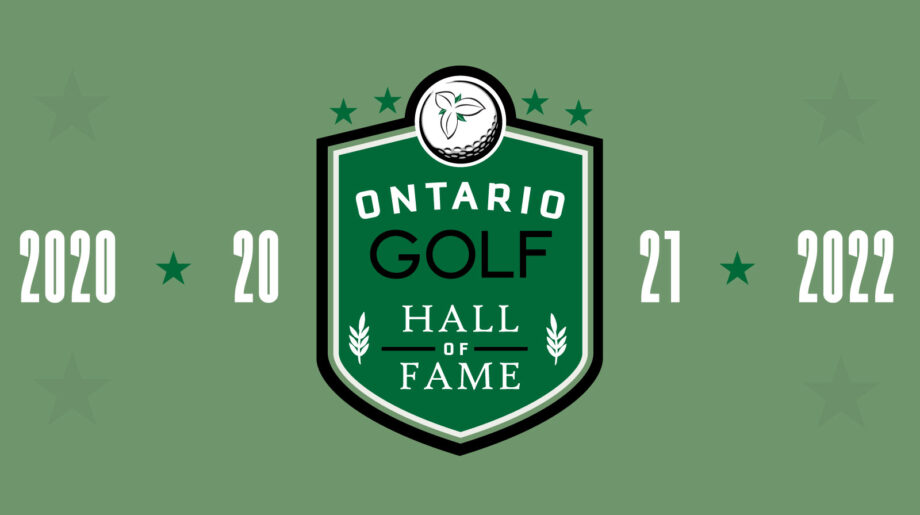 Uxbridge, ON – After a two year hiatus due to limitations on public gatherings associated with the pandemic, Golf Ontario is excited to announce the newest members headed to the Ontario Golf Hall of Fame. Given the lapse in events, there are a total of five inductees representing the 2020, 2021 and 2022 classes. Inductions will take place during two separate ceremonies, the first taking place on July 24 at Woodington Lake Golf Club in Tottenham, Ontario as part of the Sotheby’s International Realty Canada Ontario Open week and the second October 17, at Wooden Sticks Golf Club in Uxbridge, Ontario. Three media contributors will also be awarded the Lorne Rubenstein Media Award, which is presented annually to an individual who has been associated with a recognized Ontario media organization for major contributions to golf in Ontario.

Mike Kelly, Golf Ontario CEO exclaimed “On behalf of our Hall of Fame committee members and chair Stu Hamilton, we are thrilled to once again celebrate the extraordinary accomplishments of players, builders and media in Ontario golf and we are so excited to bring together our new and current members of the Ontario Golf Hall of Fame for two special ceremonies.”

Danny Mijovic, enters the 2020 Ontario Golf Hall of Fame class in the Professional Golfer category after 35 plus years as a golf professional.

Mijovic attended Texas Wesleyan University where he was an individual medalist at nine collegiate tournaments and is the only player at any collegiate level to win an individual national championship in all four years. The four-time All-American won the 1983 Canadian Amateur Championship, the 1984 Mexican Open, the 1984 Porter Cup and the 1985 Labatt’s Blue-Light Championship.

Mijovic continues his career in golf as he currently works as ClubLink’s Director of Instruction at King’s Riding Golf Club and King Valley Golf Club.

Receiving the Lorne Rubenstein Media Award for the 2020 class is writer and journalist, Tim O’Connor.

He covered huge events such as the Masters, U.S. Open, PGA Championship, duMaurier Classic, and the Canadian Open. Additionally, he also produced golf documentaries for the CBC Radio program The Inside Track and launched The Golf Show for the Telemedia Radio Network and AM-Talk640.

After a long and successful career in golf, Brian McCann will be inducted into the Golf Ontario Hall of Fame as a member of the 2021 class.

McCann continues to stay active in the golf community as he is now the Head Professional at Centennial Park Golf Centre in Etobicoke, Ontario.

Mills was ranked the #1 Men’s Amateur Golfer in Ontario in 2001 and was the Score Canadian Male Golfer of the Year in 2007. In his professional career, Mills won the Manitoba MTS Classic and the Canadian Tour Order of Merit in 2002. He also won the Toledo Open, the Western Pennsylvania Open, and the Canadian Professional Golfers Championship in 2005.

Mills now uses his skills and expertise to shape the next generation of golfers as head coach at Kent State University, a place where he once won 5 division 1 NCAA tournaments.

For 2021, Ted McIntyre will receive the honour of accepting the Lorne Rubenstein Media award.

McIntyre is a long-time golf writer and editor. He has worked in the golf industry for over 26 years, writing for media outlets such as GolfStyle Magazine, Ontario Golf Magazine, and The Travelling Golfer.

We are delighted to present Ted with this award, as it is well deserving due to his contributions and involvement in the game of golf.

Dave Gourlay receives the honour of entering the Golf Ontario Hall of Fame posthumously due to his influence and contributions to the game of golf.

Gourlay was a founding member of the Canadian Golf Superintendents Association (CGSA) and the president of the association in 1973. He was named Superintendent of the year in 1982 and won the John B. Steele Award (CGSA’s highest honour) in 1997.

Gourlay was a great mentor to many and his impact spans many generations.

After a 54-year career in the golf industry, the late Nick Genovese will enter the Ontario Golf Hall of Fame in 2022.

Nick was a mentor and an inspiration to many, as well as a staple to the sport of golf for the visually impaired.

The recipient of the Lorne Rubenstein Media award for the year 2022, is Associate Publisher of Flagstick Golf Magazine Scott MacLeod.

MacLeod has worked with Flagstick Golf Magazine and Ontario Golf News and has dedicated over 25 years of hard work to the game of golf. He has been a journalist/writer writing articles for Flagstick as far back as 1996. MacLeoad is a “Class A” Professional with the PGA of Canada and continues to demonstrate his love for the game through his work.

An active and respected member of the Golf Journalist Association of Canada, MacLeod is well deserving of this award.