Golf Ontario 2018 Players of the Year 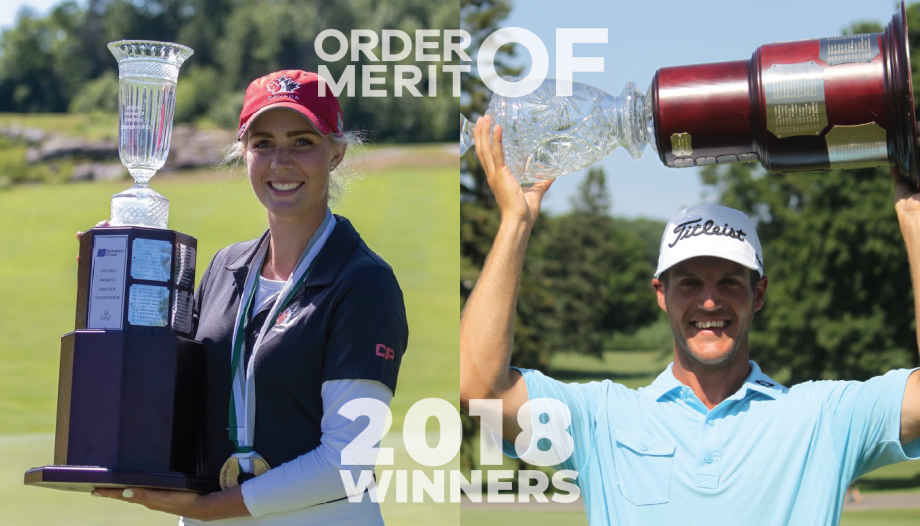 After another successful year in the books, Golf Ontario is proud to recognize nine athletes for their remarkable accomplishments on the golf course this season.

Mallory Dayman, Manager of Sport for Golf Ontario remarked, “We are so proud to acknowledge this group of champions. It’s extremely commendable if you consider the depth of competition and what these amateur golfers must balance while still pursuing their passion.” Dayman added, “They carry on the tradition of top notch Ontario golfers and the rich heritage of our association, our tournaments and our sport within the province.”

These athletes have succeeded at the highest levels in each of their respective categories, while juggling work, academic endeavours and maintaining a well-balanced lifestyle. At Golf Ontario, we are privileged to recognize these individuals on their accomplishments on the golf course this past season.

A familiar face sits atop the Order of Merit ranking for the Men’s Mid-Amateur and Amateur divisions.

The 30-year old NHL referee from Elmira Golf Club, has been the Men’s Amateur leader in Order of Merit ranking for the past 3 seasons, and since becoming eligible for the Mid-Amateur category in 2013 has held on to the top spot every year.

Rank, an accomplished amateur has done quite well for himself, being next to the best players in the world on the ice one week to getting the opportunity to compete against the best golfers in the world the next as the highlight of the year was earning a spot in the 2018 U.S. Open by finishing tied for first at a regional qualifying tournament.

Showing his prowess as the top men’s golfer in the province, Garrett dominated the competition in both Golf Ontario provincial championships taking the Ontario Men’s Mid-Amateur in June and one month later capturing the Ontario Men’s Amateur going wire to wire in both competitions. Rank talked about the year he had “This season was very memorable. It was a goal of mine to win the Ontario Amateur because I had never won. Qualifying for the US Open was an amazing experience and gave me a lot of confidence heading into the summer schedule. Experience and confidence propelled me to victory at the Amateur and Mid Amateur. The Mid Amateur was the week after the US Open so I was coming in on a high and I was very motivated to win the Ontario Amateur.”

Garrett would like to thank the Elmira Golf Club, University of Waterloo Golf, Golf Ontario, Golf Canada National Program, Derek Ingram and Dave Smallwood for all the opportunities and advice he’s received over his career that allowed him to follow his dream.

The Szeryk dynasty continues in Ontario Women’s golf for 2018.

The 17-year-old Team Canada Development Squad Rookie gets the recognition she deserves after a very accomplished season in the books.

The 2018 season would not begin without its own challenges as the future Texas A&M star would make the major life transformation moving to British Columbia for 4 months as part of a new centralized program with Golf Canada. “Being on the Development Squad has taught me a lot this year, not only how to handle myself on the golf course but how to handle myself off of it. I had a pretty rough year full of up and downs but being on this team has given me the thick skin and confidence to deal with it” said Szeryk.

With outstanding performances at the Western and Ontario Amateur’s highlighting her year. It was another event that stood out to Ellie as a turning point for her season, “the performance I am most proud of is my 2nd place at the Future Links Pacific. It seems like an odd event to pick considering I placed 2nd, but this was one of my first events coming off my long break due to my injury. Prior to the event I was hardly able to hit more than 40 golf balls and I was really scared about how I was going to perform.

Obviously, Ellie was able to pull through giving her confidence for the rest of the season.

Matthew Anderson, a member at Credit Valley Golf & Country Club saw an improvement this year, leading the U19 Boys division after finishing 6th the previous year.

Matt credits much of his success this year to his coach and parents, “My parents have sacrificed a lot over the years taking me to all of the tournaments I play to test myself and become a better player. I’ve been with Alf Callowhill for about 5 years now and he’s done monumental things to help me with my swing and has always supported me and given his time to help me as a player”.

Signing a letter of intent in 2017 to play golf at the University of San Francisco, Anderson was primed for a special year. A member of the Golf Ontario 2018 Provincial Team, Anderson highlighted the season with a win in the Investors Group Junior Boys Spring Classic and a 2nd place finish at the Investors Group Junior Boys Championship. “The win at the Spring Classic which was at the beginning of the year helped instill confidence in my game that would last the whole summer,” Matt said.

Matt’s strong season would also include a T13 finish at the Western Jr., a finalist of the Ontario Jr. Boys Match Play and a T6 finish at the Canadian Jr. Boys Championship.

This years Women’s Mid-Am leader Julia Hodgson is a first time leader in this category and belongs to the Donalda Club in North York, Ontario.

Hodgson had the year that she hoped for, coming out on top at the Women’s Mid-Amateur Championship at Seguin Valley Golf Club. “I love to compete and its always a treat to be able to play in competitive amateur events, especially to be able to get back into the Ontario circuit. Competing for the Ontario Women’s Mid-Amateur trophy was an amazing experience. Moreover, being the 2018 champion gave me the confidence that I needed to perform successfully at the US Women’s Mid-Amateur this year,” said Hodgson. That confidence allowed her to make it through the USGA Qualifying rounds where she made it to the round of 8.

Hodgson gave much credit to her family and friends. “I give a lot of credit to my parents who always make it out to spectate at my tournaments; especially to my dad who caddied for me at the Ontario Women’s Mid-Amateur. As well to Donalda Club for all their on-going support the staff and members give me.

A new face leads the Senior Men’s Order of Merit in 2018. In his first year of eligibility in the Senior Men’s division, Mark Brewer of Whitevale Golf Club led the group by over 3000 points.

Brewer’s year is highlighted by his performance in the Investors Group Ontario Senior Men’s Amateur Championship, where he finished the round with 4 birdies on his last 5 holes to take the lead and secure the win. When asked what the win meant to him, Brewer stated “It means a lot, it’s an Ontario Championship Event and it’s really nice to get your name on the trophy.” Not only did Brewer get his name on the trophy like he wanted, he also got his name to the top of the Senior Men’s division to be recognized as the Player of the Year for the category.

Kyrinis leads the Senior Women’s division in Order of Merit for a third time, after being the runner up in 2017.

Coming off of back to back wins in the Ontario Senior Women’s Championship, Kyrinis is showing no signs of slowing down, coming off of one of her best years. Judith, who is a registered nurse, is doing a good job of balancing a demanding job while playing a top level game in the Senior Women’s division.

When asked what her most memorable part of the season was Judith said, “Being under par and getting the 3 peat at the Ontario Seniors was special especially after coming off the US Sr. Am win. We all put a lot of pressure on ourselves to perform well so I was proud of how I handled it coming out of the gate in the first tournament of the year.”

The 2017 USGA Women’s Senior Amateur winner already has her sights set for next year, “A goal for sure is to make the cut at the US Sr. Open in May at Pine Needles. Learned a lot about playing in that environment from this year and plan on being better prepared.”

Gerry Mei edged out his club mate at Station Creek Golf Club, Jeffrey Fang, to capture this year’s Juvenile Boys Order of Merit Ranking. After what Gerry called a disappointing finish last year placing 50th in the listings of Order of Merit, saw a great improvement, crediting a new practice routine and better scheduling of tournaments to propel himself to lead the group.

A second place finish at the Canadian Junior Boys Championships highlighted another busy season for the Newmarket native. “I think I played my most consistent golf there and overall, I was very happy with my score and finish” said Mei, a sure confidence builder for the 17-year-old would see him cap off his season by winning the CJGA Mizuno National Junior Championship.

Blazevic, a member at Greystone Golf Club, impressed many on route to leading the Order of Merit ranking for the Bantam Boys division. Finishing the 2016 season ranked 36th and the 2017 season ranked 5th, we saw steady improvements from Peter that earned himself a spot at the top this time around. Peter, 14 at the time, played in the Investors Group Junior Boys Championship, where he finished tied for 21st at Loyalist Country Club which also earned him a spot in the Canadian Junior Boys Championship making the cut finishing at T26.

Peter’s strong season also didn’t go unnoticed by the Team Ontario selection committee as he joins the team for the 2019 season.

Capping off this years list of Order of Merit leaders is Emily Zhu, a member at National Pines Golf Club.  Finishing the 2016 and 2017 seasons ranked fourth and third respectively, Zhu finally secured her spot at the top in 2018.

Emily, who is only 14, made a name for herself this year, kicking off the year by winning the Junior (U19) Girls Spring Classic.

After great performances the past 3 years, it should be no surprise to see more out of Emily for years to come.

Read more information about our Order of Merit here