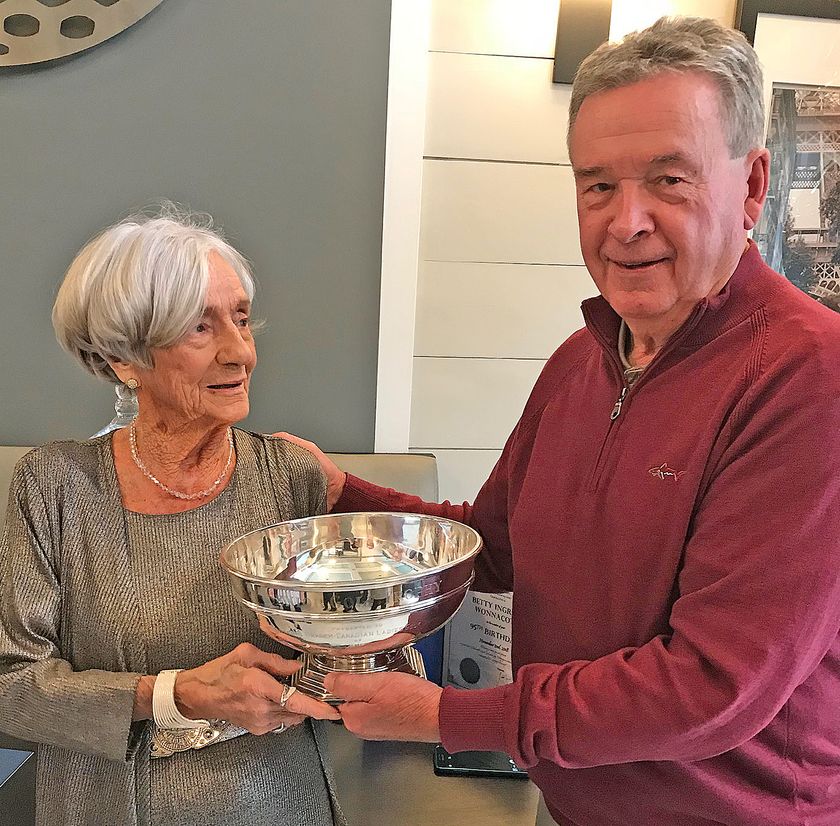 Betty Ingram Wonnacott celebrated her 95th birthday, with friends and family, on Saturday Oct. 27 at X1X Restaurant at the Bay of Quinte Golf Club, next to the greens which she conquered as an amateur golfer for almost seven decades.

Both Bay of Quinte MPP Todd Smith and Belleville Mayor-Elect Mitch Panciuk, dropped in to personally congratulate Ingram Wonnacott on her milestone birthday and to honour her for both her achievements and her zest for life.

Dave Mills, President of the Belleville Sports Hall of Fame, re-presented Ingram Wonnacott with the original trophy she won 43 years ago for capturing the Ontario Senior Ladies Championship.
At the age of 94, Ingram Wonnacott was still playing golf at a high level until she was sidelined by hip pain that required replacement surgery. Now equipped with a new hip and renewed vigor, she is anxiously anticipating the 2019 golf season. You can bet money that she will be on the tee in the spring.

Ingram Wonnacott was inducted into the Belleville Sports Hall of Fame in 1987, the first year of the HOF. She is also recognized by Golf Ontario on their Wall of Recognition – 2006. Ingram Wonnacott, who was born in Newcastle in 1923 and resided in Clarington until she was married in 1943 and moved to Belleville, was also inducted into the Clarington Sports Hall of Fame in 2013 for her achievements.