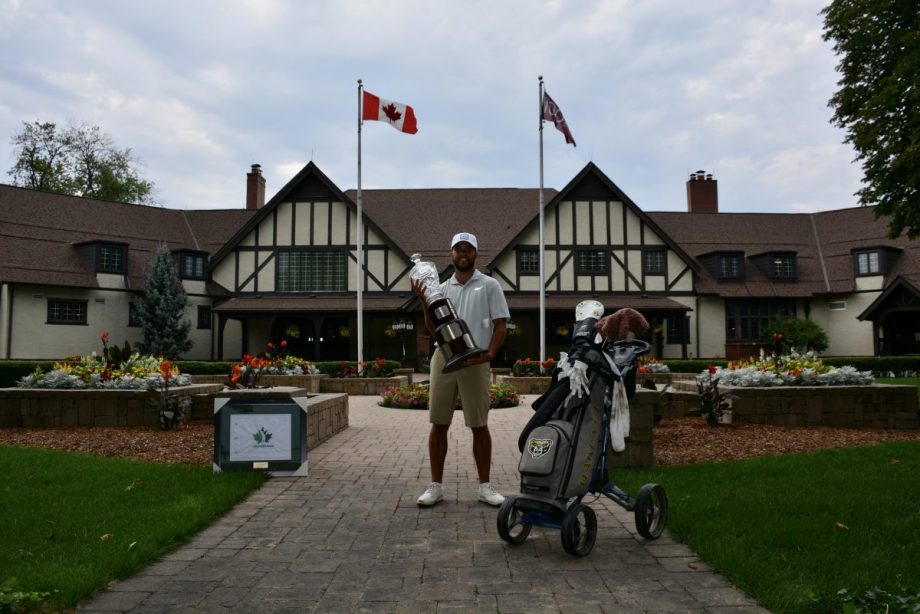 Tecumseh, ON – Following an eventful 54-holes of golf over the course of four days, the crown has been passed down and the 99th Ontario Men’s Amateur Championship has been awarded to Thomas Giroux. The championship hosted by Beach Grove Golf and Country Club experienced water accumulation during round two, causing the tournament to be shortened to a 54-hole championship. This decision was made following consultation with the course superintendent and the tournament committee.

After a tie in regular play in pursuit of the title, Nicholas Hofland (Hamilton G&CC) and Thomas Giroux (The Club at North Halton) endured a sudden-death playoff on eighteen. Both eight-under following the final round, Hofland and Giroux would head back to the tips with Giroux coming out as the victor. Giroux’s name will join the likes of Gary Cowan, Stu Hamilton, Mike Weir, Warren Sye, Albin Choi, and Corey Conners on the 1923 Gary Cowan trophy. Hofland would claim the silver medal after a low round of 66 and a total score of 205. The bronze medalist, Cam Kellett (St. Thomas G&CC), would fire a total six-under on the championship to leave him three strokes off Giroux.

In the post-round interview, Giroux said the win “feels really good. It’s my first Ontario Amateur win, so it’s kind of a notch on the belt and I’m really excited about it.” Heading to a playoff with Hofland, Giroux expressed that “neither of us hit stellar drives but mine got a little lucky with a bounce to keep it in play. Second shot was decent, into the right bunker, then I made a nice up and down for birdie to seal the deal.” With rounds of 70, 67, and 68, Giroux felt that he really picked apart the course with his driver. “I’d say it’s probably the best I’ve ever hit my driver in a tournament. I kind of overpowered it a little bit to give myself a lot of opportunities around the front nine, and then made a lot of clutch up and downs coming down ten, eleven, twelve, and thirteen. I wasn’t hitting many greens and I had some good ups and downs for a lot of chances, so that was good.”

A member of the Oakland University men’s golf team, Giroux commented that his recent season assisted his win today. “We had a shortened season obviously due to COVID, but we played well and finished strong by winning our conference. That lead us to regionals and we did our best. It’s always good to play against the best fields out there, so it definitely helped me get into this week.” In closing, Giroux thanked Golf Ontario and Beach Grove.