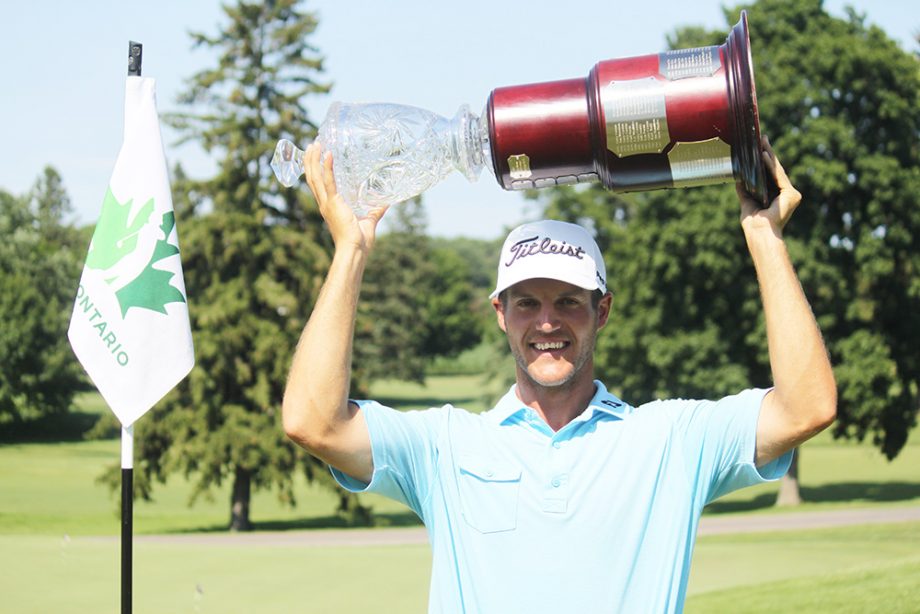 ST THOMAS— With a fairly steady final round Garrett Rank led the tournament start to finish and captured the 2018 Investors Group Ontario Men’s Amateur Championship at St. Thomas Golf and Country Club. This comes on the heels of winning the Men’s Mid-Am earlier this season already.

Rank entered the day with a 5 shot lead and five-under for the tournament. He opened his front nine (36) with two birdies and two bogeys and ran into some tough putts down the stretch which resulted in a double bogey on sixteen and a bogey on 17 to finish his back nine three over (38) and ended up two under overall. (66-69-73-74-282) Rank said “I didn’t putt well the last two days which was frustrating.” He added “The greens were obviously the defence out here.”

Rank talked about what the win meant to him. “It’s a huge honour. I know not many guys have won this tournament and the Mid-Amateur in the same year. I’m very thrilled to be up there with the names that are on the trophy.”

Picking up the bronze was Thomas Giroux from The Club at Hilton who also had a strong round ending the day two-under (68). That moved him to one over (72-72-72-69-285) for the championship.

Rank, DeMarco and Giroux all earned the right to represent Ontario in the inter-provincial competition at the Canadian Men’s Amateur Championship, at Duncan Meadows Golf Club and Pheasant Glen Golf Resort from B.C., Aug. 6-9.

For full tournament information, including the final leaderboard, see the tournament site at: https://gao.bluegolf.com/bluegolf/gao18/event/gao1881/contest/1/leaderboard.htm

The host club had four Men who participated in the event, Greg McKegg and Cameron Kellett who were tied for 8th, Ryan Jeffrey and Brad Vanpuymbroeck.

Golf Ontario would like to thank St. Thomas Country Club, their staff and all the volunteers for hosting the event. Thanks also to the Golf Ontario volunteers and to title sponsor Investors Group for their continued support of golf in the province.