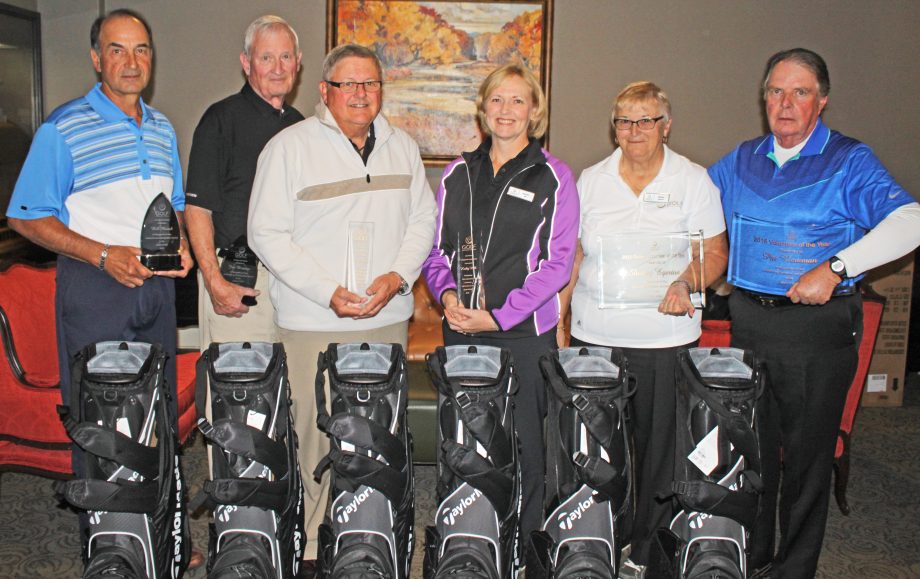 MISSISSAUGA — The Golf Association of Ontario (GAO) was pleased to announce the recipients of the 2015 Volunteer Awards on October 5, at the annual Volunteer Appreciation Day held this year at the Mississaugua Golf & Country Club.

The GAO volunteer recognition program has been designed to recognize outstanding performances and contributions by volunteers who have played an instrumental role in promoting the growth and development of amateur golf throughout the province of Ontario, while preserving the integrity and traditions of the game.

“Our volunteer team in Ontario is second to none and their dedication to the growth of the sport is inspiring,” said GAO Interim Executive Director Mike Kelly. “From course rating to championships to committee work, volunteers move our association forward with passion and for that we are grateful.”

Honourary Life Directors are recognized for their outstanding achievements through their involvement as a Committee and Board Member. This year the GAO chose to recognize a pair of individuals who have made tremendous contributions to the association and golf in the province.

Bill Muzak, a resident of Baden, can often be seen and heard at many GAO events as a starter welcoming players and guests to the tee at tournaments. He has been volunteering as a Tournament Official since 2001. He also served on the Board of Directors from 2008 to 2014 during which time he sat on numerous board and operating committees.

Jim Bristow, from London, is a past Ontario Golf Association President (1996) and has been a volunteer with the GAO since 2002. He is a level 4 Rules Official, but also works as a Site Coordinator, Senior Rules Official and currently serves on the GAO’s Finance/Risk Committee.

The Dick Grimm Distinguished Service Award is considered the highest honour recognizing individual service to the game of golf in Ontario. The award is named after Richard H. Grimm, who was affectionately known as “Mr. Canadian Open” for his service to the event from 1965 to 1993. The GAO’s Dick Grimm Distinguished Service Award recognizes an individual’s meritorious service as a volunteer. Recipients of this award embody the principles of integrity, dignity and commitment, which are central to the volunteer experience and to Mr. Grimm’s persona.

Kathy Hill, a Mississauga resident, has been a course rater for more than 20 years. She has been a Team Leader and Chair of the Handicap & Course Rating Committee and is designated as a Master Course Rater. Throughout her time volunteering with the GAO, Hill has shown strong leadership and interpersonal skills. She has taken on additional responsibilities in the form of recruiting and training new course raters and has always been willing to help out when called upon.

Randy Millage, from Ennismore, has been involved in golf in the province since 1980. His work has concentrated on junior programs that began out of his home club: the Peterborough Golf & Country Club. He has also served as club president and on numerous club committees. Millage teamed up with the GAO in order to organize junior events. The events helped to open doors for junior golfers by making connections with NCAA schools. Millage is also a Certified Rules Official and has been a Site Coordinator at GAO qualifiers and championships for many years.

Volunteer of the Year — Pat Newman

The GAO Volunteer of the Year Award has been designed to recognize and honour a GAO volunteer who has demonstrated outstanding performance and contributions while preserving the integrity and traditions of the game.

Pat Newman, a native of Collingwood, has been a GAO volunteer since 2007. As a dedicated Rules Official, Newman has demonstrated his leadership skills in that role along with the positions of Senior Rules Official and Site Coordinator. One of Newman’s greatest accomplishments happened in 2014 when he took on the task of writing and introducing the GAO qualifying manual. It became evident that the manual is a valuable resource for new and returning volunteers and has provided consistency at qualifiers that are operated by volunteers.

The District Volunteer of the Year Award has been designed to recognize those volunteers who embody the spirit of volunteerism and have shown dedication by making a significant contribution in promoting, supporting and expanding amateur golf within their district.

Shirley Egerton, who lives in Bath, has been volunteering with the GAO since 2009 as a Tournament Official and has been the Kingston District Coordinator since 2013. Egerton has fully embraced her district community and has taken a special interest in promoting and supporting junior golf in the district. She is always available to help and takes time to mentor new volunteers at qualifiers and championships.

The GAO congratulates all of the 2015 award winners and thanks all of the volunteers who put in countless hours to make GAO events successful.