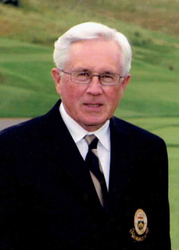 The Golf Association of Ontario was saddened to learn that former President Steve James passed away on Aug. 22. James was a former Rules Official and Board of Directors member (2002-08). In 2014, James received the GAO’s Honorary Life Director award. The GAO wishes their condolences to the James family.

Obituary from Obits For Life

Steve died peacefully with his wife present on Saturday August 22nd at Innisfree House hospice after a long battle with cancer. He was a generous and caring man and will be greatly missed by his wife Carole, sons Gregory (Miran) and Robert (Alana), and granddaughters Victoria and Cadence.

Steve was born in Ottawa on November 23rd 1941, and grew up in Sudbury. He received his Bachelor of Commerce degree from Queen’s University in 1964. He and Carole lived in Toronto and Ottawa before moving to Waterloo in 1973 where he became a partner at what is now KPMG. He was also an active member of the Kiwanis Club of Twin Cities for many years.

Steve was a member of Westmount Golf & Country Club where he enjoyed golf, curling and many friendships. He also took on a leading role with the Golf Association of Ontario, serving as President in 2008. Carole and Steve spent many winters in the Jupiter, Florida area where golf could continue to be a year round obsession.

Cremation has taken place and a private family celebration of life will follow at a later date. We would like to thank all our friends and medical professionals for their wonderful care and support.

Condolences for the family and donations to Innisfree House or charity of one’s choice may be arranged through the Erb & Good Family Funeral Home, 171 King Street S. Waterloo at www.erbgood.com or 519-745-8445.