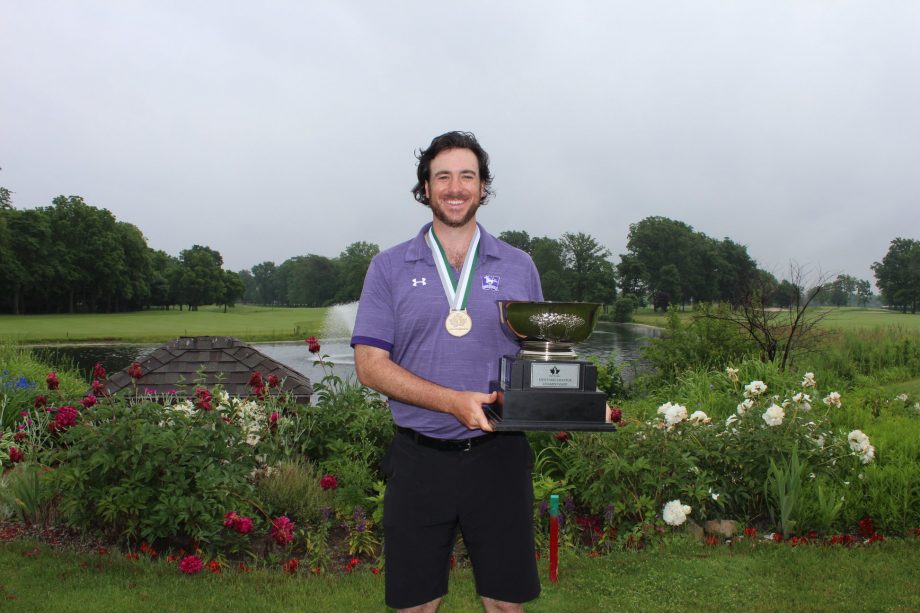 Amherstburg, ON — Unlike the sunny first two rounds, the third and final day of the Ontario Men’s Mid-Am Championship welcomed the 66 remaining players with wet and rainy conditions. With their rain jackets zipped and umbrellas in hand, the players trudged through the damp course in hopes of taking home the hardware.

The day proved to be extremely competitive, and despite the challenges of wet weather, the players persevered and there were many impressive rounds on the challenging Pointe West Golf Club.

After today’s 18 holes, it was Charles Fitzsimmons (Thornhill Club), fresh off his recent Canadian University Championship win, who ended at the top of the leaderboard with a final tournament score of -6, behind a steady final 1-under 71 in the final round. The entire third round was a tight race between Fitzsimmons and Philip Arci (King’s Riding GC). With both players flip flopping around for the lead, it was uncertain who would take home the hardware until the very last moments.

Fitzsimmons started the day with a 2 shot lead on Arci, but Arci had a hot start to the day carding two birdies in the first two holes. Arci briefly held the lead until Fitzsimmons had his own set of birdies on the eight and twelfth holes, and for the remainder of the round it was anyone’s game. Arci then rolled in three birdies in four holes to pull ahead for the lead, but double bogeyed the 16th hole, allowing Fitzsimmons to tie up the score. Arci, now in the clubhouse with a 5-under for the tournament, could only watch as Fitzsimmons hit the shot of the tournament on the par 3 17th. After hitting his tee shot into the bunker, Fitzsimmons, clearly agitated, stepped up to the bunker and took a long deep breath, staring at the hole. With a new found calmness, he walked up to the ball an proceeded to blast it out of the sand and into the hole for a clutch birdie that pulled him into the lead for good.

“That was a really special moment for me,” said Fitzsimmons. “My caddie kept mentioning the close score with Arci near the end of the round and I knew that I would have to make some impressive shots to pull ahead of him, so I was really happy about that one.”

Fitzsimmons would finish the tournament with a total score of -6, and Arci a final score of -5. Following closely behind first and second was Simon McInnis (Mississauga GC) with a final score of -4. McInnis had a strong finishing day, carding 3-under 69 to pull into the important third place. The top three players in the tournament, Fitzsimmons, Arci, and McInnis were all exempted into the Ontario Open at Woodington Lakes Golf Club, where they have an opportunity to compete for the historic championship.