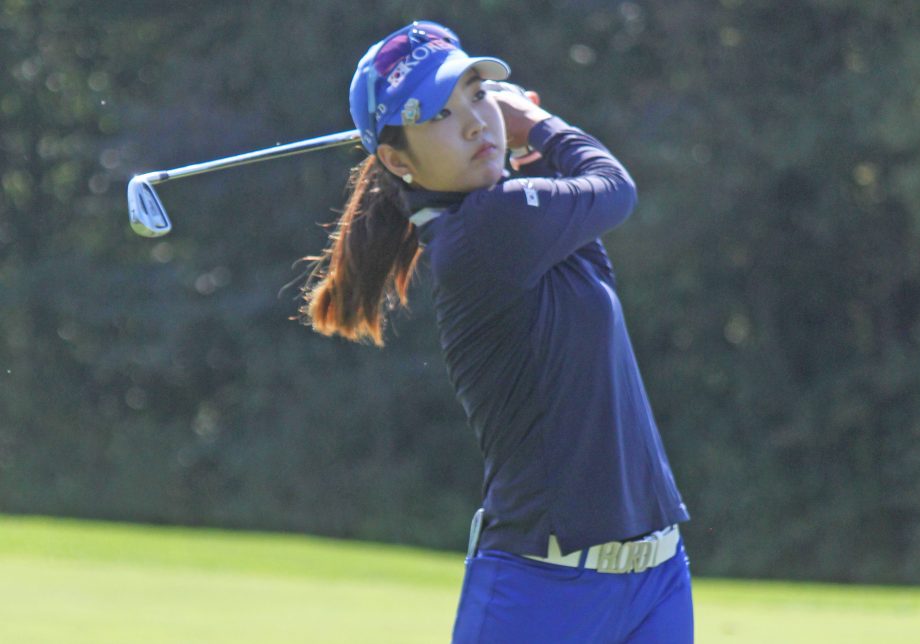 OTTAWA (Golf Canada/ Golf Association of Ontario) – Clear skies and brilliant sunshine provided an ideal backdrop for the second round of the 2015 World Junior Girls Championship at The Marshes Golf Club in Ottawa. The team representing the Republic of Korea took full advantage of the ideal conditions to expand its lead atop the standings.

“I am very satisfied with both the scores and details of today’s performance,” said Korean coach Sang-Won Ko. “Yesterday the scores were fine, but the details weren’t where we wanted them to be. Today everything went well.”

Ko credited hard work and increased familiarity with the course for his team’s play. “The players are getting used to the course and are getting more comfortable playing it. Their putting was much better. We worked on it after yesterday’s round and it helped a lot today. To continue to lead, we just need to keep putting well.”

Leading the Korean side was Eun-Soo Jang who tallied six birdies en route to a 5-under 67. The 17-year-old, who has been battling a cold, is finally feeling more like herself. “Yesterday, I was struggling. Today, I got back to my game and gave myself more chances to make birdies. My wedge play was the strongest part of my game today. My shots from 80-yards-in were really good. I stuck many of them to within a foot or two on many of the holes.”

Cecilie Bofill of Silkeborg, Denmark ascended the leaderboard with five birdies, including three across a bogey-free back nine. The 17-year-old finished the first day of competition tied with 10 other players in fourth-place at even-par; her round of 4-under 68 has vaulted her into second.

The 18-hole leader – Hye-Jin Choi – followed her opening round of 2-under 70 with a 71. She carded two birdies on the day and despite sitting third in the competition, the 16-year-old’s tally will not count towards her team’s total on the day.

The Korean trio extended its lead from two to five strokes on the strength of performances from Jang and the team’s final member – Shin Hye Kim. She collected four birdies on the front nine before a pair of bogeys saw the 18-year-old finish at 2-under 70. The team is now 9-under 279 through two rounds.

Led by Bofill, Team Denmark rose two spots to claim sole possession of second place. Puk Lyng Thomsen’s even-par round also counted towards her squad’s combined total of 4-under 285, while Line Toft Hansen’s 75 on the day completes the trio’s scores.

Team Sweden – comprised of Frida Kinhult of Fiskebackskil, Gothenburg’s Elin Esborn and Karlstad native Filippa Moork – holds third place at 1-under 287. Kinhult, who sits T5, posted a round of 1-under 71 to count alongside Moork’s 72. Esborn was 3-over 75 for the round.

Toping the Canadian contingent is Alisha Lau. The 15-year-old carded one birdie and completed the round at 2-over 74. The national team Development Squad member is T24 at 6-over for the competition.

Head Coach of Team Canada One, Ann Carroll, provided some insight on her squad’s second-round performance. “I think they tried a little too hard today. I think some of them got off to a not-so-great start and after that, they started to force things instead of letting things come to them. I tried my best to get them in the right frame of mind and back to where they could control things.”

Carroll remains positive on the experience as a whole. “I think playing in an international event like this excels their learning and gives them confidence that even though they may not have played their best, they still know they can play against other girls from around the world.”

The third round of the World Junior Girls Championship will begin tomorrow at 8 a.m. Additional information regarding the tournament, including tee times and full results, can be found at www.worldjuniorgirls.com.