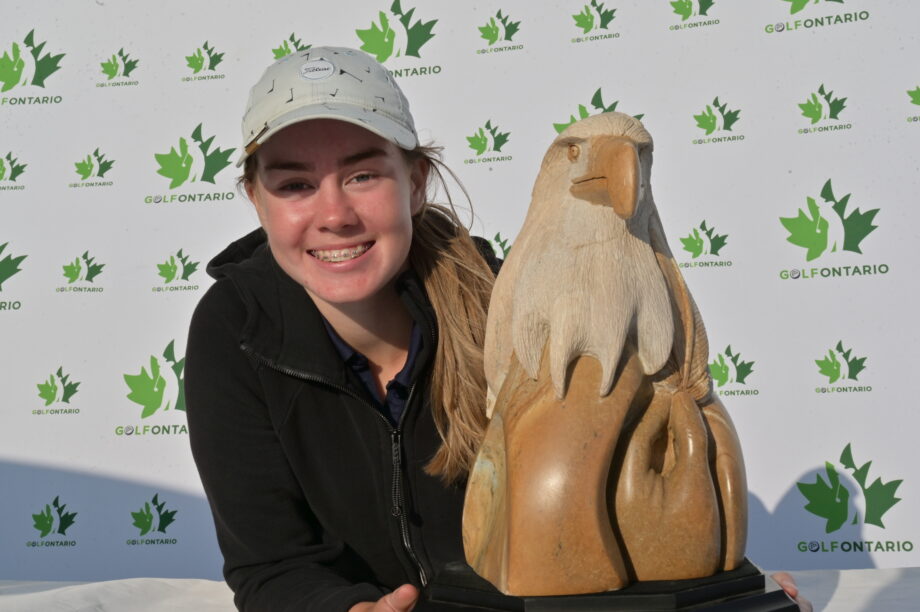 Windsor, ON – Emily McKee and Zach Smith decided nobody else would hold the lead in this week’s Junior Tour Championship from the 2022 Ontario Provincial Super Camp presented by Foresight Sports at Ambassador Golf Club. Both lead the third annual tournament wire-to-wire to win in convincing form, McKee on the girl’s side by three strokes and Smith by nine shots in the boy’s division. The severe winds gusting upwards of 40 km/h as the day went on couldn’t slow down either champion as they both claimed their respective titles.

Team Ontario member Zach Smith (Brampton Golf Club) was in control on the boy’s side again with a tidy even-par (71) round, including four birdies. Smith almost made an incredible eagle on 13 that would lip out from the fairway. Graydon Laughlin (Ottawa Hunt & Golf Club) fired a 2-over (73) to capture the silver medal. Avery Mahoney (Hamilton Golf & Country Club) and Marshall Bath (Oshawa Golf & Curling Club) would shoot identical rounds of 74 to tie for third and secure bronze medals. “The highlight of the week was my hole-in-one on Wednesday, I then made birdie from the fairway on the next hole, that just doesn’t happen often,” mentioned an ecstatic Smith after his round.

Emily McKee (St. George’s Golf & Country Club) fired her third straight, steady round, an even-par 71, to close things out on a charging Shauna Liu (Station Creek Golf Club). Lui fired the girl’s low round of the week, a brilliant 2-under (69) that included back-to-back-to-back birdies on 6,7 and 8 to take home the silver medal. Kelly Zhao, also of Station Creek Golf Club, would secure the bronze medal after a final round of 3-over (74). McKee remarked, “it was very fun and a well-run tournament, I love Ambassador Golf Club, it was a great experience, and I had a lot of fun.”

Competitors of the annual Ontario Provincial Super Camp and Tour Championship will be looking to win the Dave Mills trophy tomorrow. The award, first handed out in 2021, was named in honour of Mills, a past Golf Ontario Executive Director and massive supporter and advocate for junior golf, who presented the first-ever Tour Championship trophy in 2020. The soapstone trophy was carved by Canada’s foremost Ojibway sculptor Kris Nahrgang, who was able to meet with Mills before he passed. He sent this message along to describe his work. “As we all try to gain success in a sport we love, some people ensure that we are recognized for the achievements we attain. Dave Mills was that man. His work in our sport was reliable and done with a maturity and class, which made one feel important the very moment you met him. In my Indigenous culture, we are presented with an Eagle feather when we obtain recognition. In this tribute piece, I have created a visual of an Eagle feather being presented by the hand of this great man. The Eagle is a messenger, and it flies between the real and the spiritual realm and converses with the Creator to ensure we as people, are doing well. This piece is to recognize the man and the Spirit of this honour you have received this day. His love for this sport, and the goal to offer support for your efforts will never be forgotten. He will now be here in Spirit to present you with this honour of your achievement. Congratulations today and into the future!”

The 54 top junior boys and girls invited to compete this week at the 2022 Ontario Provincial Super Camp presented by Foresight Sports Canada earned their spot in the Tour Championship based on the Junior Golf Pathway Rankings.

Golf Ontario would like to thank the players, rules officials, and staff for supporting the 2022 Ontario Super Camp and Tour Championship. To Ambassador Golf Club and your team, thank you for being such fantastic hosts through this week of difficult weather conditions. Special shout out to our Super Camp presenting sponsor, Foresight Sports Canada, for the support and technology they provided. Also, a massive thank you to Taylormade for their continued assistance during the training days and for sponsoring the chip-off competition.