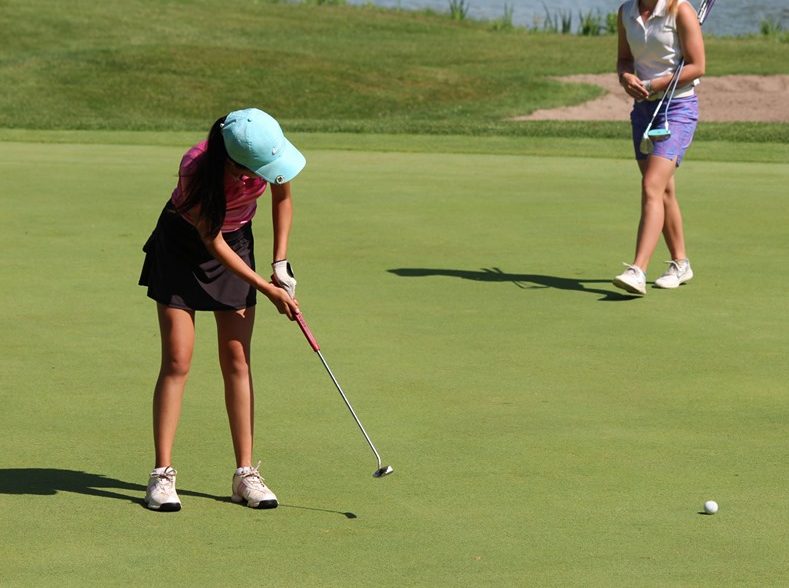 London, ON — Warm and foggy skies welcomed the players as they took to Greenhills GC for the first round of the Ontario Juvenile (U17) Championship. Both the u17 boys and girls are teeing it up at Greenhills this week, and with talented fields on both sides, today was sure to be an exciting opening round, as the players tried to grab an early lead in the tournament.

The Juvenile boys teed off at 7:30 to get their first round underway, and all eyes were on last years champion Ethan Cardwell (Oshawa G&CC). Being the early favourite, many thought he might come out on top after day one, but the rest of the field had different thoughts.

With only two strokes separating the top five players it was a tough battle for the top, but after 18 it was Carson Duffy (Bigwin Island GC) who came out ahead. With a score of -3, Duffy had quite the impressive showing on his back nine, carding four birdies after going 1-over on his front nine.

Coming off a semi-final defeat in the Junior (U19) Boys Match Play Championship, Duffy will likely be looking to continue his momentum and to build on his lead the next two days.

Duffy leads by only a single stroke over Owen Kim (Blue Springs GC) and Tommy McKenzie (Northridge Public GC). The duo sits tied for second at -2 after they too showed some impressive play over the course of the first round. Duffy, Kim, and McKenzie will all surely be heading into day two with hopes of securing a healthy lead before the final round.

Unfortunately, Cardwell had to withdraw from the tournament with back spasms on the fourteenth hole. He sat at +3 at the time of withdrawal.

Tee time tomorrow is set for 7:30 am. For future results and information on the tournament, visit the official tournament page HERE

Much like the boys portion of the tournament, the Juvenile girls saw some hot play and competitive scores throughout. Although it was a tight race, it was Kelly Zhao who was able to propel herself above the rest, and build a four stroke lead with a score of -2.

From the get-go, it was Zhao who seemed to have the game to be poised to be the the possible leader after the first round. With two birdies on her front nine, both her and Mia Wong (Bayview G&CC), who had 3 birdies on the front, led the pack out the gate. But when it was all said and done it was Zhao who was able to ride the momentum and stay ahead of the others.

“My putting was strong today and I had a lucky chip in to birdie 15,” said Zhao when asked about her round today. “I just came out today to have fun and try my best, so it’s nice being able to take the lead early.”

The 13-year-old enters the day with a sturdy lead, allowing her to play a calm and steady game with not a lot of pressure to over perform.

Wong, who was in the race for first with Zhao early on, now sits tied for second alongside Nicole Gal (Oakville GC) and Krystal Li (The Summit G&CC) with scores of +2. The trio trail four strokes behind Zhao heading into tomorrow’s round, but there is still lots of golf to play.

Tee time tomorrow is set for 7:30 am. For future results and information on the tournament, visit the official tournament page HERE

About the Ontario Juvenile Boys and Girls’ Championships