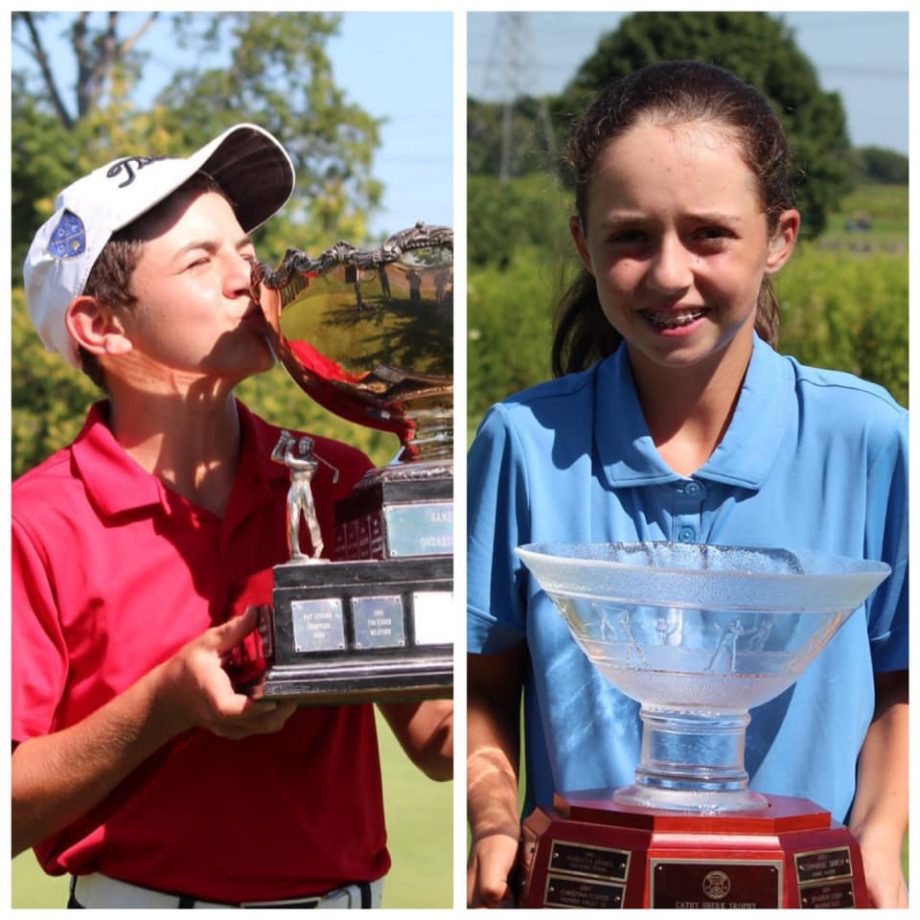 Ajax, ON — Warm and sunny skies welcomed the players as they took to Deer Creek GC for the final day of the 2019 Ontario Bantam Championship. The best bantam boys and girls all came out to today’s round to try to outlast the strong fields, and crown themselves a champion.

If day one was close, then to say the same about second round of the girls’ portion of the tournament would be an understatement. Coming all the way down to the wire, it was Alexa Ouellet (Credit Valley &CC) who came out on top by a single stroke.

The 12-year-old Ouellet wowed the crowds with today’s round, carding three birdies on the front nine of her round. Previous to today’s start, many might have questioned her ability to keep up with the older competitors but she quickly flipped the narrative, proving age is but a number. Heading onto the back nine, Ouellet was up by four strokes until she found herself in some trouble. Scoring two bogeys on 10&11, and three more bogeys on 14, 15, & 16, the competition quickly caught up and the once four stroke lead shrunk down to one. The pressure was on.

Most 12-year-olds would shrink in the face of such adversity, but Ouellet proved yet again that this moment was hers. Carding a par on 17, and closing out 18 in style, Ouellet was crowned a champion.

“I feel so relieved right now,” said Ouellet after winning the tournament. “With all those bogeys I thought I was going to lose it, so being able to come back and win is a great feeling.” When asked about how she maintained her composure and stuck to her gameplan, she couldn’t help but laugh.

Trailing closely behind Ouellet the whole way through was Krystal Li (The Summit G&CC) and Kelly Zhao (Station Creek GC). The duo finished the tournament +5, only a single stroke behind the leaders, and proved their ability to push the leader right until the end. Despite not being able to come out on top, both Zhao and Li showcased impressive talent throughout the week.

Much like the first day, the second round of the boys portion of the championship was a tight race all the way through. With the top of the leaderboard suffocated with low scores from a wide range of players, it wasn’t an easy task to take the top spot, but it was Andres Diogenous (Whistle Bear GC) who prevailed.

Entering the day one stroke behind the two leaders, Diogenous knew he had to show up with some spectacular play.

“I knew I had to be great,” he said. “I had to come out and put everything out there. Luckily I was able to come out on top.” The 14-year-old had the most steady round of the day due to some spectacular play down the stretch. With some absurd putts and a majority of his shots landing on the green, Diogenous paved his way to the championship by not making mistakes. He would end the tournament with a total score of +1 (143), and a champion.

Following closely behind was Matthew Javier (Scarboro G&CC) who had the low round of the day to propel him to second. Entering the day at +5, not many were looking at Javier to make a run, but he quickly made everyone take notice. Going -3 on the front nine, the Toronto resident found himself within striking distance of the leader. He would continue to have a strong round, finishing the day -3 and with a total score of +2, only one behind Diogenous.

“I played really well today, hit a lot of greens, and made a lot of putts,” said Javier. “It’s a good feeling.”

Owen Kim (Blue Springs GC) and Carter Jarrett (Renfrew GC) tied for third with total scores of +4, an impressive showing for both.

Golf Ontario would like to thank the competitors, their families, and everyone who attended and supported this championship.  We would also like to thank Deer Creek GC and their staff for their excellent course and hospitality in hosting this event.