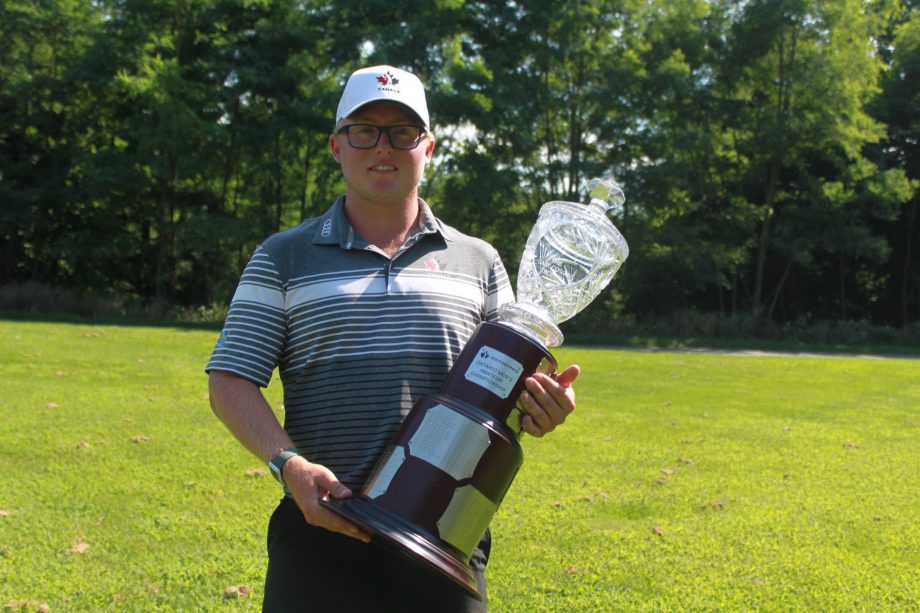 Otterville, ON – Beautiful sunny conditions ushered in today’s final round for the 98th annual Ontario Men’s Amateur Championship. It was a very competitive field throughout the entire week, and today’s round was no different with the Championship coming down to the last few windy holes to determine the 2020 champion.

Clawing his way to victory down the final stretch was Golf Canada Amateur Squad Member, Cougar Collins, with an even par round (72) to finish the Championship at 2-under. He got some help from second and third round leader Robbie Latter (Credit Valley G&CC), who stumbled just slightly down the back stretch and lost the lead after a double bogey on 13. Latter impressively fought back to remain tied with Collins until the seventeenth where he would drop a shot once again. Latter finished at 5-over (77) on the day, and a bogey on the 18th would help secure Collins the victory. Tied for second with Latter was Thomas Giroux (North Club of Halton), who finished the day and the week with a solid even par.

After today’s exciting win, Collins (TPC at Osprey Valley), spoke about his play “definitely not the start I was looking for, but I battled back pretty quick with birdies on the second and third holes”. He felt his swing and iron shots were very solid which helped him through the battling of leaders on the back nine.

He also spoke on what the Championship meant to him, saying “This is definitely at the top of my career accomplishment, this was pretty awesome for sure… especially being in Ontario and being my first time on Team Canada and winning the Ontario Amateur ”. Collins joins some phenomenal talent and names including Garrett Rank (2018), 2003 Masters Champion Mike Weir (1990 & 1992), Gerry Kesselring (1949, 1951, 1952, 1953), professional players Jon Mills (2001), Corey Conners (2010), Albin Choi (2012), Chris Hemmerich (2014) and Gary Cowan, who holds the record for the most Ontario Amateur Championships with nine.

Golf Ontario would like to thank the players, staff, and volunteers for their support of the Ontario Men’s Amateur Championship. To Otter Creek Golf Club, and all their hard-working staff, thank you for being gracious hosts and for providing us with such valuable volunteers. Lastly, a huge thank you to our sponsors and partners, Adidas, Taylor Made, Modern Golf, Dormie Workshop, Durham Artificial Grass, Humber College, Barcelo Bavaro Grand Resort, Baka Mobile, and Play Golf Myrtle Beach. We are grateful for your continued support.

For future results and information on the championship, visit the official page here.