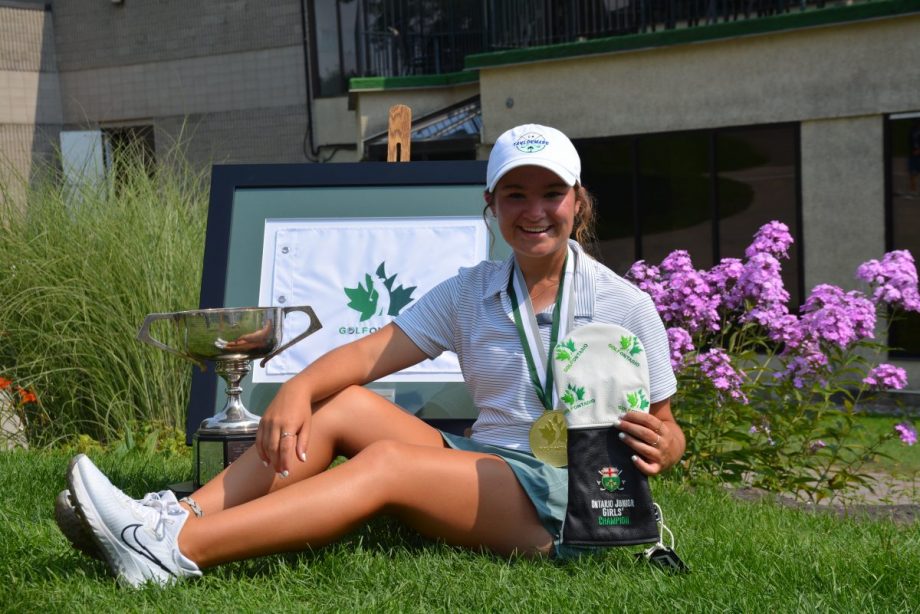 Brockville, ON – With temperatures reaching the mid-twenties at Brockville Country Club today, the players battled to be crowned the 2021 Ontario Junior (U19) Girls’ Champion. Following round three, the leaderboard was tight with just eleven girls sitting within a ten-stroke difference. In the final round, the leader groups pulled away from the pack to present a true champion.

Firing her lowest round and the only under-par score of the tournament, is the newly crowned Ontario Junior Girls’ Champion, Peyton Costabile (Whistle Bear). Costabile defeated the challenging Stanley Thompson design, to finish the championship with a one-under round and 296 total. Her name will join the likes of Marlene Stewart Streit, Sandra Post, Alena Sharp, and Brooke Henderson on the 1927 Ellis trophy. Claiming the silver medal three-strokes back is Vanessa Borovilos (Weston G&CC), after a round of 76. The bronze medalist, Chaewon Baek (BC Public Player), would fire a total thirteen-over on the championship.

In the post win interview, Costabile expressed “it honestly feels so amazing! I have played this event for four years now and I’ve seen one of my closest friends win it. While I’ve always been near the top, I didn’t play so well last year. I came up this year and I really wanted to win, and I did, so I’m extremely happy.” Through rounds one and two, Costabile was focused on staying level headed and playing her best game to get her as far up on the leaderboard as possible. Round three brought complications of time delays and rushing through holes, which lead to missed putts. In the final round, Costabile says she “just went out there and tried to have the best time. Emily McKee, Nyah Kelly, and I made it a great day and had a bunch of fun.”

Reflecting on the tournament, Costabile’s strongest part of the four rounds was her putting. “I made a lot of putts and my mental game just really kept me in it. I could’ve lost myself a couple of times, but I just stayed level headed and positive.” Peyton Costabile will be competing next at the 2021 Ontario Women’s Amateur Championship at Pointe West Golf Club in Windsor. In closing, she wished to “thank all the Golf Ontario volunteers and staff for running a great tournament this week.”

To view the leaderboards from the 2021 Ontario Junior (U19) Girls’ Championship, visit our Golf Genius page. For media coverage, please visit our @TheGolfOntario Facebook page and view photo albums.