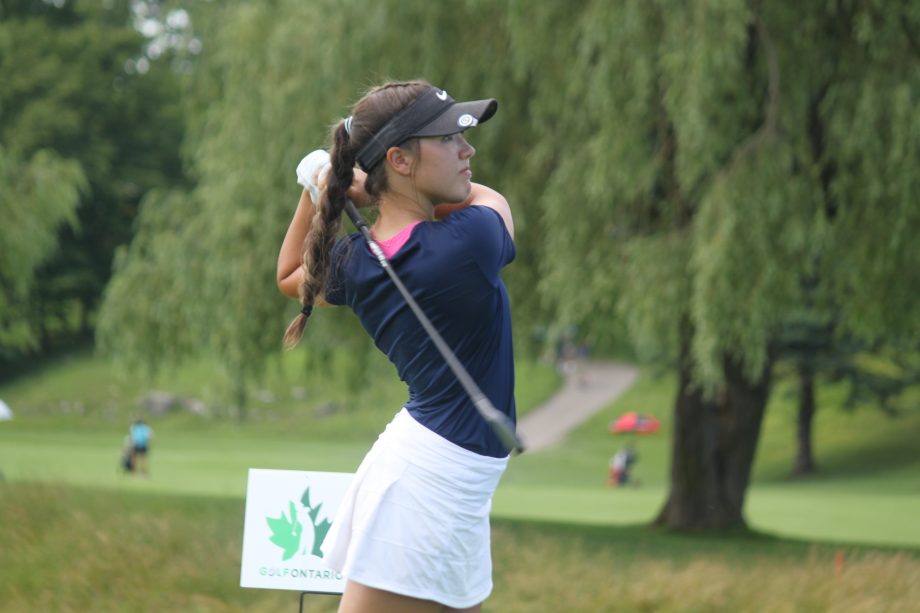 CAMBRIDGE, ON – Mother Nature tried hard to wreck the third round of the 84th Ontario Junior Girls Championship at the beautiful Galt Country Club, but after an early four and a half hour weather delay, the girls finally hit the course. Once the rain eased up, the sun and smoldering humidity took over for the afternoon making it a challenge for the field.

Ashley Chow (The Lake Joseph Club), hung in there all day through it all and after birdies on 15 and 17, found herself the leader after three rounds with an even par (72) scorecard. Her three day total of -1 (215) allowed her jump ahead of both Sarah Beqaj (Toronto Golf Club), and Victoria Zheng (Granite GC) who both had the lead at one point in the round. Beqaj, the 36 hole leader, stumbled slightly early on but regained her composure to fire a +3 (75), while Zheng also posted an even par (72) round to find herself in second place, one stroke back of Chow. Beqaj (at +1 for the tournament) sits another stroke back in third place.

A happy Chow talked about of her play afterwards. “I don’t feel I had my A-game today but I just banged it out and made a bunch of ups and downs and just tried to make birdies when I had the chance. Compared to day one where I was on my game, today was similar to my round yesterday, where I was just trying to keep scores low and avoid any holes ballooning.”

Chow explained her strategy heading into tomorrow’s final round. “I’m just going to go out and be confident, swing freely and trust in my game.”

The round of the day belonged to Taylor Kehoe (West Haven G&CC) who fired a brilliant -3 (69) and climbed into fourth place. With eight players, including five Team Ontario members and one National Junior squad member, within 9 strokes, tomorrows final round should be an exciting one. Final round action resumes Thursday morning with tee times commencing at 7:30am.