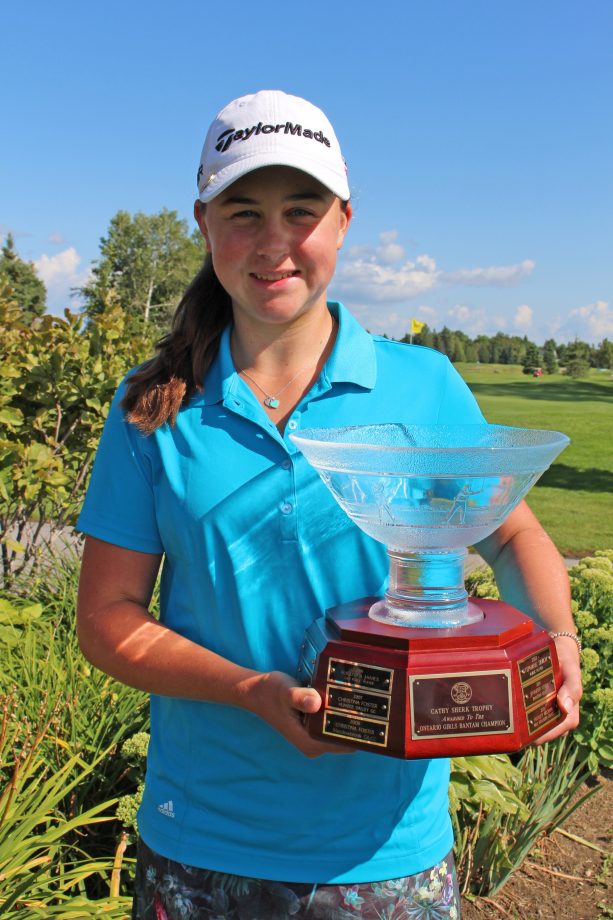 ASHTON, ON— Port Credit resident Chloe Currie came into the second round of the Golf Association of Ontario’s (GAO) Ontario Bantam (U15) Girls’ Championship, Aug. 7 at the Canadian Golf & Country Club in Ashton, with a comfortable 11-shot advantage. She would see that lead to the end of the second and final round as she captured the 2014 championship.

“I made solid shots and had a plan. I went out and played the course according to my plan, the best I could. It was a challenging course. It wasn’t too long but it was tricky. There are a lot of 90 degree holes, tough bunkers and putting greens that become really fast when you’re putting downhill. You just need to get going and play steady. I think I was able to do well because I just played steady golf,” said Currie after the win.

The 14-year-old from the Mississauga Golf & Country Club had an opening round of two-over (74) and cruised through the second round finishing it at one-over (73) to end the tournament three-over for the win.

“This win would rank as the best career highlight for me so far. It is the best I have ever done in a tournament. I am so glad that I came to play this event. It was my last year to play in it and I wanted to come here, play strong, finish strong and I did.”

Currie had got herself to one-over for the tournament thanks to a birdie on the seventh hole. However, she would shoot two-over on the back nine. Still, it would not matter as Currie was able to hang on to win by an amazing 24-strokes.

“I was consistent on the par threes. My irons were great today and my putting was amazing, I made a lot of important putts that gave me momentum for the next holes,” added Currie.

Finishing second was Olivia Trieu from Richmond Hill, who ended the tournament at 27-over and Brampton’s Amanda Kerr was third at 29-over.

For the full leaderboard see the tournament site at: http://gao.bluegolf.com/bluegolf/gao14/event/gao1421/contest/1/leaderboard.htm