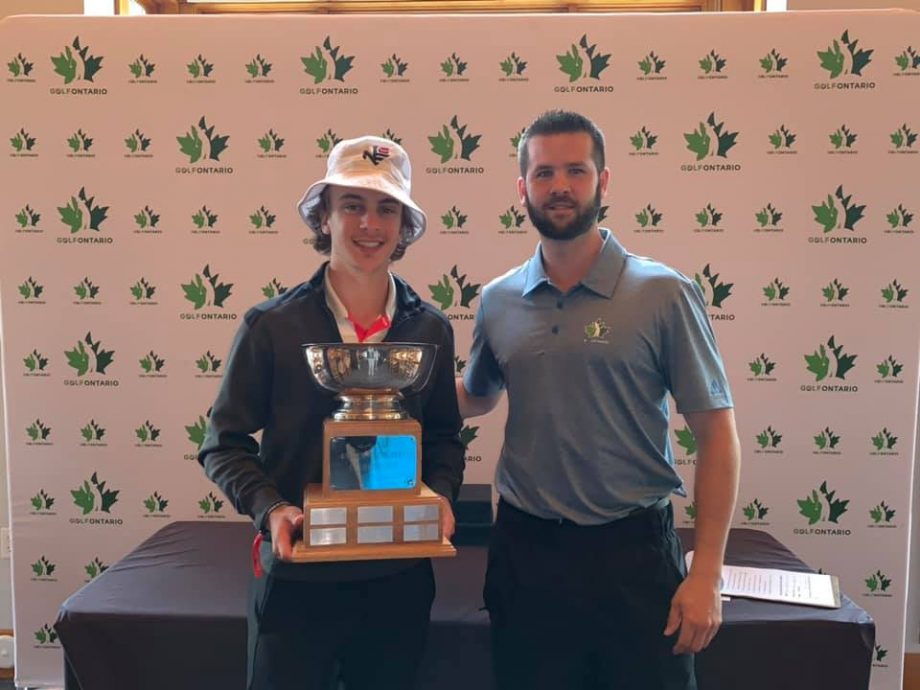 The final pairing of Callens and Aiden Gavey (Beverley G&CC) were welcomed to the fourth day of the tournament by undesirable weather. Cool winds, rainy skies, and wet greens were obstacles for the finalists the entire way through, but despite the poor conditions however, the two played strong and consistent.

Thursday’s finals match saw Gavey take an early lead, while Callens bogeyed the first two holes. Gavey held onto this lead with some steady putting through the first 5 holes, but Callens made a comeback on the sixth, and eventually taking the lead in the seventh.

Callens held the lead for the rest of the front nine with steady shooting, but Gavey made a quick comeback in the tenth, making a beautiful putt for a birdie. The even score was short lived however, with Callens regaining the lead on the eleventh hole, where he took advantage of Gavey’s bogey.

Callens, with cautious and consistent shooting, held the lead by one until the 18th hole. It wasn’t until the final putt on the eighteenth shot, where Gavey made a real push to tie. Gavey hit a long putt on the last hole to win the 18th, pushing the finals to a playoff.

With the players soaked and cold, they had to dig their heels in and find their last gear. The two headed back to the first hole, where they each teed off for the nineteenth time. After it was all said and done, it was Callens who pulled ahead. Callens took the lead early with a drive that landed perfectly in the middle of the fairway ahead of Gavey. Once he had the slight advantage, he never looked back. Hitting his third shot for birdie, Callens looked up to the cloudy skies in celebration. He was the 2019 Men’s Match Play Champion.

“It was definitely a struggle out there, especially the back nine,” aid Callens. “The weather didn’t make this course easy, but I knew I had to stay consistent out there. Gavey’s a great player, I was lucky that I was playing really well today.”

Both Callens and Gavey had difficult roads to get to the finals. Callens faced against the five time champion David Bunker in the quarter finals, meanwhile Gavey played the reigning champion Cameron Kellett in the semi’s. Through adversity however, both prevailed against tough competition, and had a very successful week.

“It’s been a great tournament,” said Callens. “There’s been fantastic competition throughout. I’ve had a lot of fun these last four days.”

Callens will be looking to continue his momentum at the Men’s Am at Oslerbrook G&CC on July 8th, but in the meantime, will enjoy being a champion.