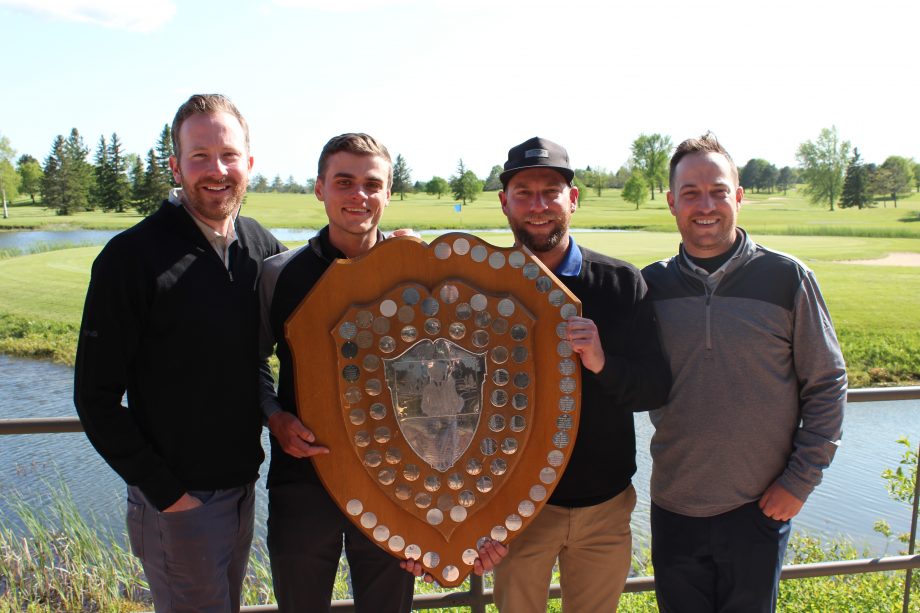 Stouffville, ON — The 86th annual George S. Lyon Club Team Championship was held at Spring Lakes Golf Club on Monday, June 3rd. Following the trend of challenging weather that has kicked off this years golf season, players arrived at the course in layers of clothes as the temperature had plummeted the evening before. With strong winds and brisk air facing the players throughout, the day proved to be a challenge. In the face of this less then perfect weather, Burlington Golf and Country Club, and Deer Ridge Golf Club ended up tied on top of the 23 team event at the end of regulation play.

Tying +18 (306) after the inital 18 holes, the two teams headed out to decide things in a playoff. Both Eric Ross (Burlington) and Pete McMenemy (Deer Ridge) went out to the 18th hole to represent their respective teams, and it was Ross who came up on top by a single stroke. After a clean drive to the fairway and a near perfect shot onto the green, Ross held the edge the entire way. Ross’ four-foot putt was the final shot of the day, locking Burlington as the champions.

“I had two good shots to start and just made sure to stay consistent throughout that last hole,” explained Ross. “I saw Pete shoot into hazard on his third shot so I knew I just had to finish steady and not make any mistakes to clinch the title.”

Burlington’s team consisted of Eric Ross, Jonathan Ross, Sean Kennedy, and Trent Abraham, who finished the round at 306. The team battled the weather, and if it wasn’t for their impressive shots down the stretch, Ross wouldn’t have had the chance to seal the deal in a playoff. The individual scores for the team on the par 72 layout were: Abraham 75, E. Ross 76, J. Ross 76, and Kennedy with a score of 79.

The second place team, Deer Ridge, consisted of Pete McMenemy, Mike Gingrich,Josh Hunke, and Matt Schnarr, who all played a fantastic round despite the heavy and cold winds. Although just falling short to Burlington in a playoff, the team played steady throughout the day. The indvidual scores for the team were: McMenemy 76, Gingrich 76, Hunke 77, and Schnarr with a 77.

Following the two leading scores by only a single shot for third place was Glencairn Golf Club. Mike Dinner, Craig Watkins, Paul Gortnar, and Jeffrey Clarke all combined to shoot +19 (307), making the race for the top spot a close call. The individual scores for the team were: Dinner 74, Watkins 74, Clarke 78, and Gortnar with an 81.

The low individual scorer of the tournament was Nicholas Yuen from Brampton Golf Club. Yuen shot a spectacular 72 (E), winning him the Crofton Harvey Shield.

Named after the Canadian golfer and Olympic Gold Medallist, the George S. Lyon Shield was presented by golf clubs of the Toronto District for the annual competition between teams of four men from each club, with the best aggregate gross score. In 1935, the ‘George S. Lyon’ was held for the first time, and has since been open to male amateur teams who are Golf Ontario members of the same member club.

Golf Ontario would like to thank Spring Lakes Golf Club and their staff for helping to host an excellent event. We would also like to thank all of the golfers who participated, and for their terrific competition that made this year’s event so exciting. Thanks also to the Golf Ontario volunteers for their continued support of golf in the province.

The next Golf Ontario championship will be the Men’s Match Play at Lake Joseph Club on June 10th.